Based in the small town of Oadby and only around three miles to the south-east of the city itself, Leicester racecourse has been a feature of the East Midlands equine landscape since first opening for business way back in 1883.

One of the preeminent tracks in the country in the late 19th century, Leicester doesn’t enjoy such a lofty position these days but it can still be counted upon to serve up some high-quality racing fare in both the flat and National Hunt spheres, offering fully modern facilities including an excellent glass-fronted grandstand.

The track does also have a couple of claims to fame, with Gordon Richards riding the first of his 4870 winners here in 1921, and five-time Cheltenham Gold Cup winner, Golden Miller, opening his account in a maiden hurdle at the course in 1931.

One of the busier tracks in the country, Leicester stages meetings throughout the year, with around two-thirds of its 30 plus fixtures being on the flat and one third over jumps. Whatever the time of year, Leicester can be relied upon to provide raceable ground thanks to excellent drainage and an efficient watering system.

The round sections of the flat and National Hunt tracks share many of the same characteristics; both being right-handed, somewhere between a rectangle and an oval in configuration and around 1m5f in circumference. Featuring extensive straight sections and well-banked bends, Leicester is a track that favours the long-striding, galloping type of performer, both on the flat and over jumps. 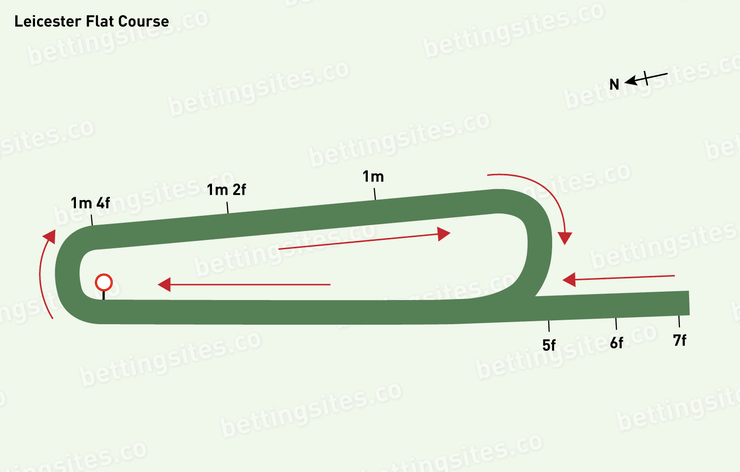 In addition to the main round course, the flat track at Leicester features a chute of around two and a half furlongs which runs directly into the home straight, creating a seven furlong straight course, over which all five furlong, six furlong and seven furlong races take place. Runners tackling the full seven furlongs of this track head downhill for the first three and a half furlongs, before facing a fairly stiff two furlong climb, with the ground then levelling off for the final furlong or so.

Generally considered a stiff course, an ability to thoroughly see out the trip is a key element of success, with doubtful stayers regularly being found out – particularly in the juvenile events at the track. Prominent racers tend to hold the edge over hold up performers on the straight course.

In addition to the shorter events, Leicester also stages races over 1m, 1m2f and 1m4f, all of which begin in the backstretch before taking a fairly sharp bend into the five furlong home straight. Much like on the straight course, stamina is at a premium on the round track, as is an ability to settle into a nice rhythm early. Any runner wasting energy through racing too keenly is unlikely to get home around here.

On good ground or quicker, there appears to be very little draw bias on the straight track. This does however change when the going is described as good to soft or softer. Under such conditions, those drawn low appear to hold the edge, with an analysis of 92 races showing win rates of 10.6% for low, 8.6% for middle and 7.6% for high.

When looking at contests on the round course, i.e. those over distances of a mile or above, a little counterintuitively it is those drawn high who fare best. Results of 151 races over these distances show win rates of 8.5% for low, 9.3% for middle and 10.8% for high. 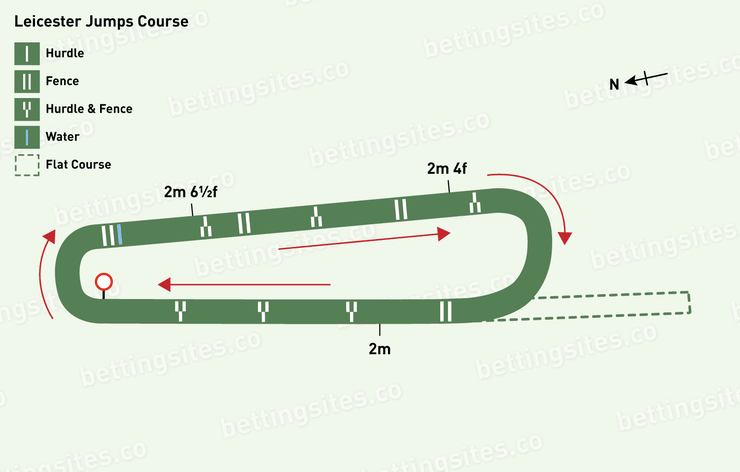 Hurdles events take place on the round section of the flat course and feature a total of six flights per circuit – three in the backstretch and three in the home straight. With the flat track being routinely watered during the summer months, the hurdles course tends to ride slower than the chase track, placing a greater emphasis upon stamina. The riders are well aware of this more testing nature though, leading to many events over the smaller obstacles being steadily run affairs. In testing conditions, the outside of the track is the place to be, resulting in many shrewd jockeys tacking across to the far rail.

Whilst lying broadly on the same patch of land as the flat/hurdles course, the chase track is largely its own entity, only really overlapping on sections of the bends. The back straight of the course sits inside the flat course, with the three furlong home straight lying to the outside of the longer flat run-in. Stiff and uphill all the way to the line, it is pretty common to see the lead change hands on this final demanding section of the track.

Those tackling the larger obstacles will face 10 fences per circuit; six in the back straight, including an open ditch and a water jump, with the home straight then containing three plain fences and a second open ditch. Whilst not as unforgiving as in years gone by, Leicester’s fences do still lean towards the stiffer end of the spectrum, with the second obstacle in the back straight widely cited as being particularly tricky. Having negotiated the final obstacle, the field then faces a run-in of one furlong to the line.