Situated in the mid-west of the Republic of Ireland and around 8km to the south of Limerick City, lies one of the country’s newest purpose-built racecourses. Also known as Greenmount Park, Limerick Racecourse only opened for business in 2001, becoming the first new track in the country for over 50 years at the time.

The history of racing in Limerick does however reach much further back, with the new venue being the seventh racing site in the area since 1790. Built to replace the track at Greenpark which closed after 130 years of operation in 1999, the track lies close to the small village of Patrickswell and has rapidly become a firm fixture on the Irish racing landscape.

Limerick stages both flat and National Hunt action, with a total of 18 meetings spread almost throughout the year – there are no fixtures scheduled in January or February. The flat dominates the summer action, with the live music and evening fixtures regularly drawing in the crowds. April’s Misted Class Martin Moloney Stakes is the highest-profile of the contests on the level.

It is however the National Hunt fixtures that provide the stage for the track’s biggest events. October’s Munster National offers €100,000 in prize money and is hugely popular with the punters, but it is the four-day Christmas Meeting which is the real highlight of the season, featuring the Grade 1 Faugheen Novice Chase and Grade 2 Dorans Pride Novice Hurdle.

This is quite a tricky track to ride thanks to those undulating sections and, as ever, certain jockeys appear to judge it better than others. With a 24% strike rate and net win of over £11 to £1 level stakes over the past few seasons, Davy Russell has been the man to follow over jumps, whilst Wayne Lordan (20% strike rate, almost £13 net win) and Shane Foley (16%, over £10 net win) have fared best on the level.

Not the happiest of hunting grounds for supporters of the market leader, with just the one race category across both National Hunt and flat returning a net win. This golden category being the 3yo handicap events on the flat, which have rewarded favourite backers with a 43% strike rate and net win of just over £11 to £1 level stakes. 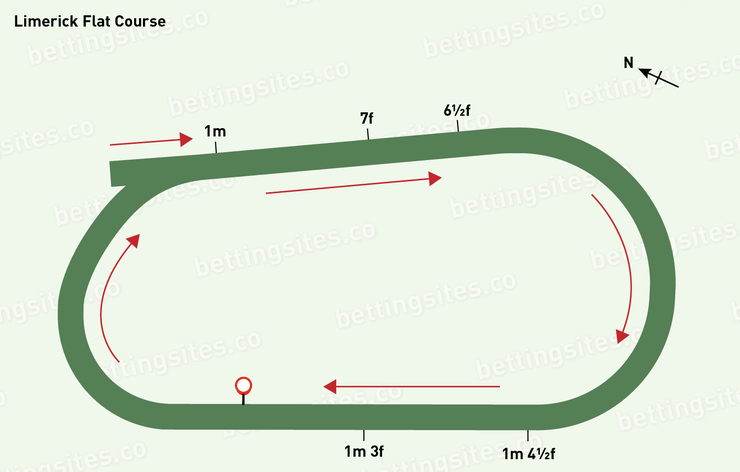 The right-handed track at Limerick is one of the more straightforward in terms of its configuration, being close to a traditional oval in shape and around 1m3f in circumference. It does however feature fairly pronounced undulations. The stiffest section of the track comes in the second half of the back straight which climbs steeply uphill before runners are granted a breather on the downhill turn into the three furlong home straight, which inclines slightly, but continuously, all the way to the line.

There are no sprint events at Limerick, with the track staging contests over distances of 7f, 1m, 1m3f, 1m4f and 2m. All events begin on the main round course barring those over a mile which instead start in a short chute that leads directly into the back straight.

The type of runner favoured can vary widely according to the prevailing going conditions. On quick ground, speedy, prominent racers are at a definite advantage – often proving tough to reel in around the easy downhill bend and only gently ascending straight. When the going is soft, however, that slowly inclining home straight becomes that much more foreboding and those held up for a late run have a far greater chance of running the leaders down.

There is little evidence of any significant draw bias at what is a fundamentally fair track. Much of the reason for this may stem from the fact that, even over the shorter distances of 7f and 1m, the runners are faced with a significant straight section of track prior to negotiating the first bend. 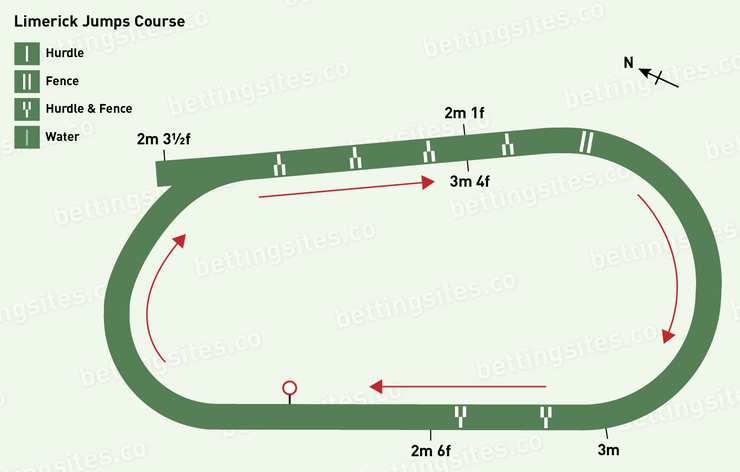 Those tackling the chase course are faced with seven fences per circuit – five in the back straight, including two open ditches, and two in the home straight. The fences themselves aren’t unduly stiff, but the five in the back straight do come in fairly quick succession and can cause problems for suspect jumpers. It is however the second last fence that is considered the trickiest. Positioned shortly after the downhill turn for home, any runner not fully organised coming out of that quick section of the track may be caught out. Upon negotiating the final fence the field encounters a run-in of only around a furlong to the line.

Lying to the inside of the course, the hurdles track is fractionally the sharper of the two. Hurdlers must tackle five or six flights per circuit – three or four in the back straight and two in the home straight. A relatively straightforward jumping challenge, if there are to be any errors, they are again most likely to come at the second last obstacle.

Front runners do well in National Hunt events over 2m and 2m4f unless the ground is particularly testing. It is however important that any such runner has the assistance of a jockey familiar with the track. Kicking for home too early on the downhill bend, and so failing to keep enough in reserve for the climb to the winning post, can ruin what would be an otherwise winning chance.