Situated only 30 miles from London, and close to the borders of Kent, Surrey and Sussex, ‘leafy’ Lingfield racecourse is one of the most accessible venues in the country. It also the most varied – being the only UK track to stage, flat, National Hunt and All-weather racing. Unsurprisingly given that versatility, it is one of the busiest tracks in the land, holding close to 80 fixtures over the course of the year.

First opened in 1890 as a National Hunt venue, flat racing followed four years later, whilst in 1989 the track became the first to stage an all-weather meeting in the UK. Hugely popular with racegoers, Lingfield Park holds a number of key races throughout the season. These include an informative trial for the Epsom Derby in May and the All-Weather Championships in April each year.

Both flat and turf action take place on the same outer track at Lingfield – the flat action taking place during the summer season. The course is then restructured to facilitate jumps racing action over the winter months.

The all-weather track lies inside the outer turf track, taking on largely the same shape and layout, but on a necessarily slightly smaller scale. The artificial surface used is Polytrack, which is generally considered to be the quickest of the all-weather surfaces, and the same as that which is utilised at both Kempton and Chelmsford.

Charles Bishop is a name to note amongst the riders on the flat turf track, with the jockey posting an impressive 28% strike rate at the venue, rewarding supporters with a level stakes net win of more than £30.

Anything ridden by Joe Fanning on the all-weather is well worth a second look. The veteran rider, who regular teams up to great effect with Mark Johnston, also registered a 28% success rate last year, enough for a net win of more than £40 to £1 level stakes.

Looking at the trainers, John Gosden hit an impressive 30% strike rate on the all-weather here in 2018, and a remarkable 40% in 2019. Over the jumps, Lucy Wadham seems to do particularly well, with a 33% strike rate across the past five seasons. 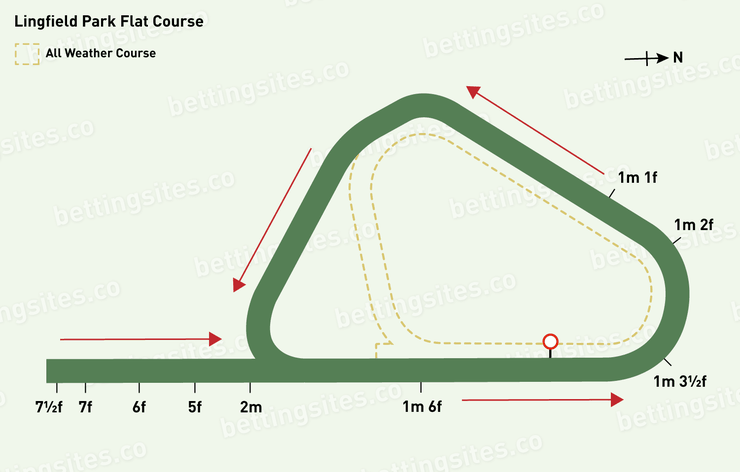 The flat turf course consists of a left-handed, fairly sharp track which is triangular in shape and close to 1m4f in circumference. Undulating and cambered, the course features a downhill run into a fairly tight final turn before a three and a half furlong run to the line, much like that observed at Epsom Downs. As such, Lingfield is seen by many as providing an ideal testing ground for potential Derby contenders.

Given the turning, undulating nature of the track, this can be a difficult course for the long striding galloping types to get to grips with. Such runners often struggle to get into an effective rhythm at the course. Overall, Lingfield places an emphasis on speed and adaptability. It is therefore generally thought to be favoured by the speedier, more agile runners.

In terms of the draw: on good to soft or quicker ground the stands rail (high numbers) are thought to be at an advantage, particular over distances of between five furlongs and a mile. Over a sample of 166 races, those drawn high in such events boasted a strike rate of 10.1%, compared to just 6.8% for those drawn low. This bias does however even out considerably on soft or heavy ground. Also be wary of heavy rainfall on quicker ground as, due to the way the track cambers, this can lead to a bias towards the inside rail (low numbers). 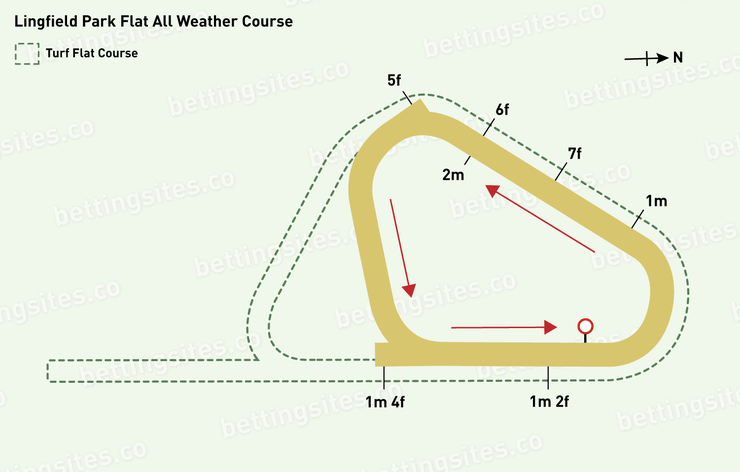 Lying inside the turf track, Lingfield’s all-weather Polytrack course is similarly triangular in shape. However, with a circumference of only 1m2f, it features shorter straights and tighter turns than the outer track. In terms of layout, the first half of the course is fairly flat, before a slight rise leads the field into a downhill turn into the straight. Overall, the track isn’t unduly demanding from a stamina perspective. It tends to favour the speediest horses – particularly those who possess a useful turn of foot.

Unlike the turf course, the all-weather track does not contain a long straight. This means even the shortest races – those over five furlongs and six furlongs – feature a bend. With five furlong events starting practically on the home turn, you would imagine that those drawn low would be at a big advantage. However, this isn’t really borne out by the stats. An ability to break quickly is often of more significance than exactly where the runners are drawn.

However, in the six furlong contests – which begin in the back straight – a low draw does seem to be advantageous; those drawn low boast a 10.5% strike rate across 321 races analysed, compared to just 7.4% for those drawn high. The stats for races beyond six furlongs are far more balanced. 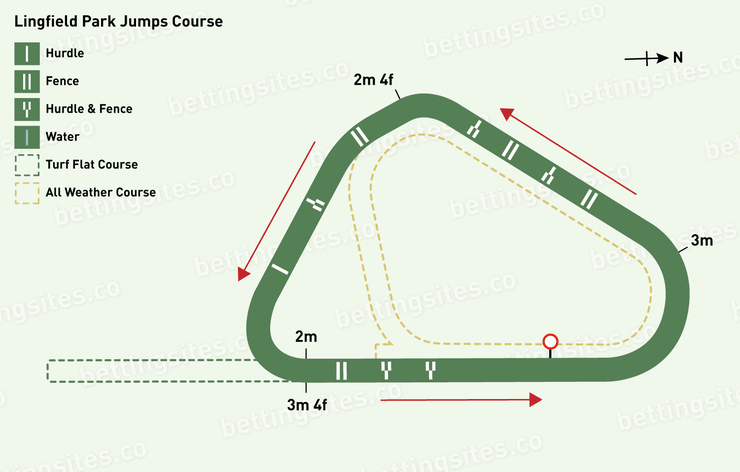 National Hunt races at Lingfield are held on the round section of the flat turf track, and as such it is likewise left handed and triangular, with a circumference of around 1m4f. The location of the winning post however does differ, resulting in a run in following the final turn of only 200 yards. Undulating, and with relatively tight turns, it favours the more agile, speedier type of runner who likes to race handily rather than the dour stamina-laden gallopers.

The chase track features nine fences per circuit, the first five of which are relatively straightforward. The proximity of the following three does create more of a jumping challenge, but overall Lingfield’s fences lean towards the easier end of the spectrum, resulting in comparatively few fallers at the venue. Those taking part in contests over the smaller obstacles will be met with six standard hurdles per circuit.

Whilst the characteristics of the National Hunt track provide a fairly easy test at the distance, things can change pretty dramatically when the ground become soft or heavy – as it frequently does during the winter months. Under such conditions, the back straight in particular tends to drain poorly and can quickly become very testing. This places more of an emphasis on stamina and makes the fences that bit tougher.

One final thing to note regarding National Hunt racing at Lingfield is the fact that, these days, the bumper races tend to be held on the all-weather track rather than the National Hunt (jumps) turf course.