Lying only 10 miles from the Welsh Border in the westerly county of Shropshire, Ludlow racecourse is situated at Old Fields in Bromfield, only two miles to the north of Ludlow’s historic town centre. Surrounded by beautiful rolling countryside, the track is one of the more popular “small” racecourses in Britain, both with racing fans and the top National Hunt trainers.

Racing in this corner of England seems to date back a very long way indeed, with tales of soldiers racing their mounts harking all the way back to the 14th century. The roots of a more recognisable form of the sport however came later, with the first written record of a race in the current location coming in 1725. Initially a flat only venue, jumps racing arrived in the mid-nineteenth century, and slowly but surely displace the flat game, to the extent that these days National Hunt racing is the only form of the sport on offer at this quaint and welcoming venue.

Ludlow operates during the heart of the jumps season, staging around 16 fixtures between the months of October and May. The majority of these meetings tend to be midweek afternoon affairs, with the highlight of the season being the Forbra Gold Cup in January.

There are effectively two separate but partially overlapping tracks at Ludlow, one to be used for hurdles contests, and one for chases. Both courses are sharp, broadly oval in shape and turn right-handed. One of the most distinguishing features of the track here is the fact that it is crossed by the B4365 road on no fewer than three occasions. Needless to say, traffic is diverted elsewhere on race days, with the points of the course crossed by the road being covered with a carpet-like surface.

Thanks to an excellent watering system fuelled by a reservoir situated in the centre of the course, the main track itself never approaches road-like conditions, whilst the quick draining subsoil also helps to ensure that very soft ground is something of a rarity.

Looking at the results over the past few seasons, there are no trainers who really stand out, but there are a couple of jockeys who have rewarded supporters with a level stakes net win. Way out in front, with an impressive 24% strike rate and a whopping net win to £1 level stakes of £100.49 is David Bass, with Tom O’Brien (19% SR, £6.56) the other rider in the black.

This has been a pretty decent track for supporters of the market leader, with both NHF events (44%, £4.47) and all handicap contests (41%, £35.84) providing jolly backers with a level stakes net win over this same period. 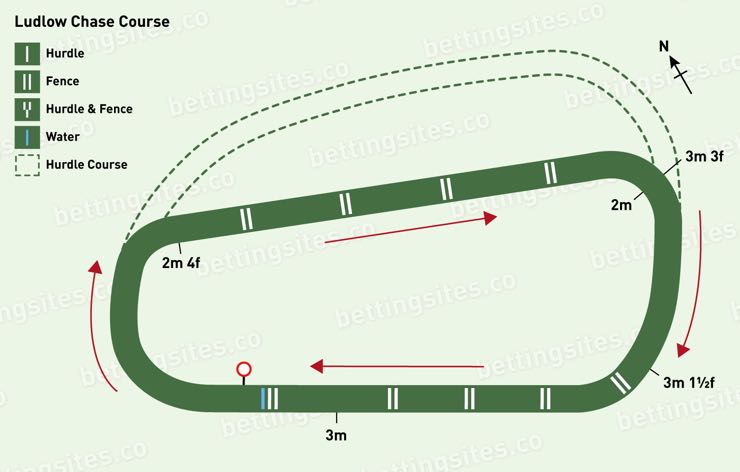 The chase course is the sharper of the two courses at around 1m4f in circumference, and closer to the shape of what would be considered a traditional oval track. Almost completely flat throughout, the track features nine fences per circuit; one beyond the winning post, four in the backstretch and four in the straight leading to the winning post, with a run-in of 250 yards following the final fence.

The fences consist of six plain obstacles, two open ditches and a water jump, and are generally considered to be pretty easy. If there is to be a jumping error, it is most likely to come at the first fence in the home straight, which can prove problematic due to its proximity to the bend. Known as “Tricky Trevor” in years gone by, the obstacle isn’t quite so tricky these days having been moved a little further away from the turn into the straight.

Due to its sharp nature, races tend to be strongly run around here, and as such one of the key factors for success is being able to jump accurately at speed. Look for those runners – particularly prominent racers – who are able to stay low over their fences, rather than wasting time and losing momentum by spending too much time in the air. Relatively undemanding from a stamina perspective, speed is the name of the game in chase events at this track.

Lying to the outer of the chase track, and featuring a more sweeping back straight, the hurdles course is 150 yards longer than the chase track. It is also the more galloping of the two tracks due to the considerably easier turns.

Unlike the flat chase course, the hurdles track does contain undulating sections, but these are only really slight and unlikely to knock a long-striding competitor out of synch. The fairer of the two courses in terms of a pace bias, those looking to come from behind fair better over hurdles than over fences at Ludlow, although prominent racers are still favoured overall.

Looking at the hurdles themselves, there are a total of six flights per circuit, with Ludlow utilising the foam-padded variety designed to minimise the risk of small injuries. The obstacles are once again split pretty evenly, with three in the back straight and three in the three furlong home straight, with another run-in of close to 250 yards following the final hurdle.