There are currently a total of 60 racecourse’s spread throughout the UK, from Perth up in Scotland and all the way down to Devon on the South Coast. However, just one of these tracks lies within the county of Lincolnshire and it goes by the name of Market Rasen.

Nestled amongst the picturesque scenery of the Lincolnshire Wolds, the track is around 17 miles to the north-east of Lincoln and only a mile to the south-east of the town of Market Rasen itself. Having first opened for business in 1924, the track is now rapidly closing in on its centenary and continues to prove popular with local punters and racing fans from further afield. 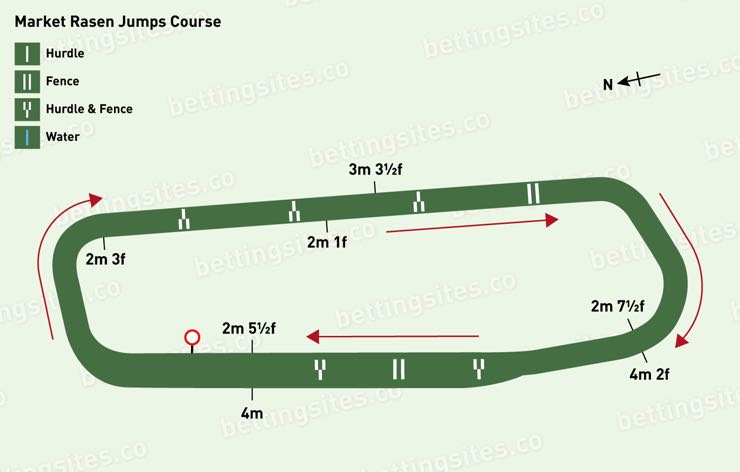 Hurdle and chase contests take place on the same right-handed track. Close to rectangular in configuration, the course measures 1m2f in circumference, is mildly undulating throughout and features sharp bends but fairly long straight sections. Of the bends, it is the turn into the home straight which most challenges the balance of the competitors due to lying on a slightly downhill section of the track.

The chase track features seven fences per circuit: five plain fences and two open ditches. Four of the obstacles lie in the back straight, with the final three in the home straight, before a run-in of only 250 yards from the final fence to the line. In general, the track is thought to provide a fairly straightforward jumping challenge, with many trainers viewing the course as being an ideal training ground for the promising young chasers in their ranks.

Runners tackling events over the smaller obstacles are faced with five flights per circuit, three of which lie in the back straight, and two in the home straight, with again only a fairly short run-in from the final obstacle to the line.

Smooth travelling, nippy sorts who like to race up with the pace seem to be at a definite advantage over those who like to come from behind at this track. One common trap hold-up runners fall into lies in beginning their finishing effort too early following the final bend, only to then run out of steam over what is a long final straight.

The ideal way in which to ride this track is thought to be to race up with the pace and then kick for home just before the first of the obstacles in the straight. Any jockey able to execute these tactics aboard a willing partner can often prove very tough to reel in. The riders may wish to hang onto their mounts for a little longer in soft conditions, but with this predominantly being a summer racing venue, genuinely testing ground is something of a rarity.

The track has been a little hit and miss for favourite backers, but there have been a couple of windows of opportunity, with both the National Hunt Flat races (47%, £12.99), and Handicap Hurdles (35%, £7.90) proving lucrative for supporters of the market leader, again over recent seasons.

A National Hunt-only venue, Market Rasen is somewhat unique on the British jumps racing scene in that the main focus of its season comes during the summer months. Whilst the Willinghome Road venue does stage racing throughout the year, the majority of the 22 meetings at the track are weekend fixtures during the warmer months.

The track may not be up there with the likes of Cheltenham or Aintree when it comes to its overall profile but purely in terms of Summer jumping action, Market Rasen isn’t too far from the top of the pile. The Summer Hurdle and Summer Plate of late July in particular being two of the most prestigious and valuable events of the summer jumping season.