Opened in 2010 as a replacement for the old Nad Al Sheba track, Meydan has the backing of Sheik Mohammed bin Rashad Al Maktoum, the ruler of Dubai and the man behind the owning and breeding empire that is Godolphin. Lying around eight miles to the south of Dubai City, the state-of-the-art course is the jewel in the crown of racing in the United Arab Emirates, and what a jewel it is!

As with most things in Dubai – which is home to a hotel so spectacular that they had to award it seven stars rather than a paltry five – when they do things, they do them in style, and on a fairly large scale. The 60,000 capacity grandstand at the track, for example, is fully one mile long, and so futuristic in appearance that it played a prominent role in the Star Trek Beyond movie. It is home to a selection of the best racecourse bars and restaurants on the planet, an on-course hotel, a golf course and a racing museum. It is fair to say that Meydan – which means “meeting place” in English – is a track which has few, if any, equals in terms of splendour.

It is only fitting that such a setting is graced by the highest class thoroughbreds. And Meydan delivers in that regard, with runners travelling from all around the world for a shot at the exceptional prize money on offer; the track’s flagship Dubai World Cup meeting alone offers a whopping $35 million. There may be no betting permitted in Dubai itself, but that’s about the only thing missing from the racing season at Meydan, which takes place between November and March each year.

As with a number of the top international racetracks, Meydan boasts both a turf and a dirt course. Both of the tracks are floodlit, which facilitates spectacular evening action. In terms of layout, both the turf and dirt courses are broadly similar in appearance to the left-handed, oval type of track which features so prominently in US racing. Both of the tracks are also essentially flat, with the only real variance coming on the slightly banked bends. At 25m and 30m in width respectively, both the dirt and turf tracks are noted for their fairness, with hard-luck stories being something of a rarity.

In common with many oval tracks, those drawn low to middle boast an advantage over those drawn high on the oval courses of both the turf and dirt tracks. Both courses also seem to slightly favour the prominent racers, particular those who stay well and are able to kick again off the final bend.

The man behind the development of the track does rather well at Meydan. The near 20% strike rate of Sheik Mohammed bin Rashad Al Maktoum’s Godolphin operation is the best of any owner since the track opened in 2010.

No real surprise then that it is two men with strong Godolphin connections who top the trainer and jockey standings across the past five years. Both Charlie Appleby and William Buick boast nearly a 30% strike rate over this period, resulting in a whopping level stakes net win of over £60 for Appleby with Buick at around £3.

Favourites do particularly well in the non-handicap events for runners aged four and older, boasting an excellent 40% strike rate in such events over the past five years. This hasn’t been enough to register a net win though, with supporters of the market leader being hit with a level stakes loss of nearly £20 over this period.

When looking at the big race of the Dubai World Cup itself, pay close attention to those runners trained in either the United Arab Emirates or the United States. Up to and including the 2021 renewal, 23 of the 26 editions had been landed by a trainer based in one of those two nations. 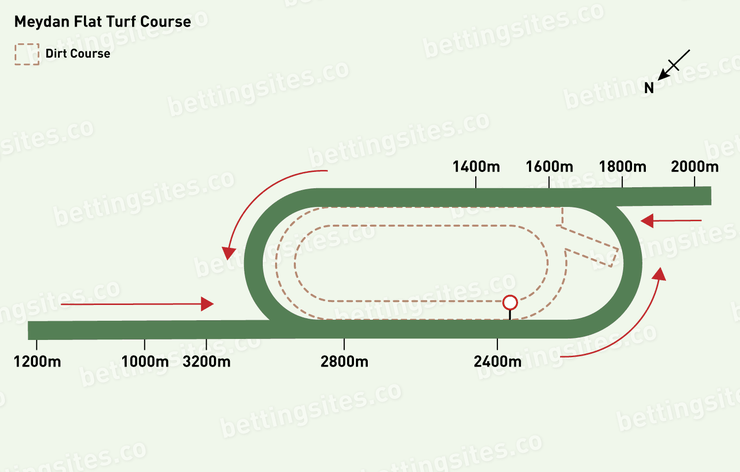 The turf track is the longer of the two courses, with the main oval section measuring around 1m4f in circumference and featuring a run-in of just over two furlongs. The course also features two chutes; the first of which runs directly into the home straight and enables the staging of sprint contests over a straight five furlongs, five and a half furlongs, and six furlongs. The longest race to be held at the track – the Group 3 Gold Cup over 2m – also starts on this section. The second chute runs into the back straight and contains the starting points for races over 1m2f and 1m1f.

Considering the track is located in one of the hottest and driest nations on the planet, Meydan’s excellent watering system does an excellent job of maintaining a high-quality racing surface, consistently providing going described as good. 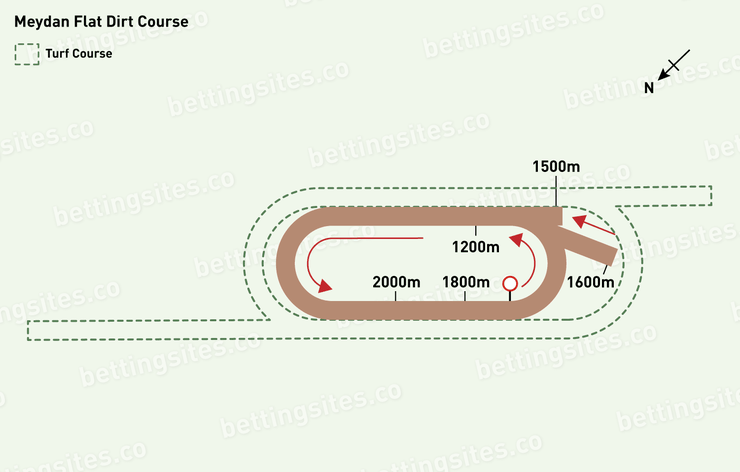 Opened alongside the turf course in 2010, the second of Meydan’s tracks initially featured a Tapeta surface – the same as that which is used at Wolverhampton and Newcastle in the UK – but was then switched to its current Dirt surface in 2015.

The track lies inside the turf course and boasts a shorter circumference of around 1m¾f and a two furlong home straight. Whilst the configuration of the track is very similar to the turf course, its smaller nature results in slightly tighter bends than the outer track, and as such tends to favour those drawn low to middle to a greater degree. Any bias which does exist is far from insurmountable though, as demonstrated by Thunder Snow who won back-to-back Dubai World Cup’s from stalls 10 and 11.

The dirt track also features two shoots which lead into the back straight. The first of these enables the mile contests to start on a straight section of track rather than on the bend, whilst the second runs just about dead straight into the backstretch and contains the seven and a half furlong start.