Situated around 14 miles to the northeast of Brighton and only a mile outside of the town of Plumpton itself lies one of Britain’s finest examples of a small rural track. Set amongst acres of rolling countryside and against the backdrop of the chalk hills of the South Downs, Plumpton is as picturesque as it is popular.

First opening for business in 1884, the venue initially played host to both hare coursing and horse racing but – to the considerable relief of the local hare population – has focussed exclusively upon its equine entertainment offering since 1889.

The site at which Sir Anthony McCoy rode his 3,000th career winner in 2009, this hidden gem of a track received deserved recognition in 2018 when awarded the title of the Best Small Racecourse in the South and it is a course that is well worth a visit. 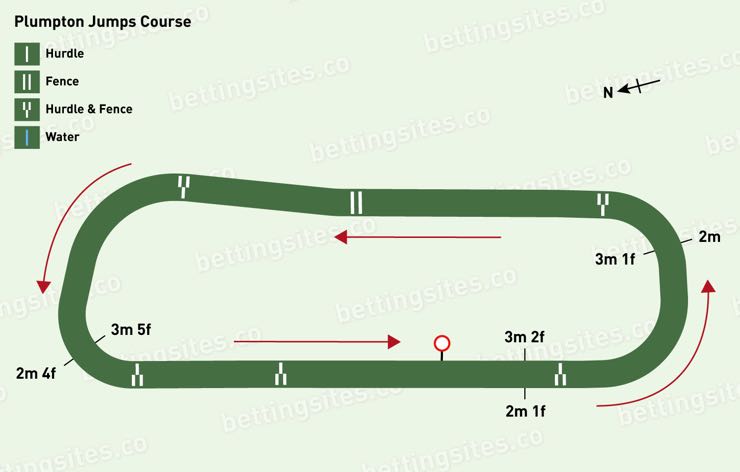 Most trainers and jockeys view Plumpton as an extremely tricky track, and it’s not hard to see why. Broadly rectangular in configuration, this 1m1f circuit features tight left-handed turns and extensive undulations throughout, placing a real emphasis on the balance of the contenders.

Upon passing the winning post, the runners are first faced with an uphill run into the back straight, before the ground then descends sharply for the first half of the back section, prior to levelling off again into the turn for home. Coming out of this final bend, it’s uphill all the way as the track climbs slowly but steadily to the line. With the run-in following the final obstacle extending for only around 200 yards, those in front after the last barrier have a strong chance of staying there.

Situated on the inner portion of the track, the chase course is the sharper of the two layouts. Runners tackling the larger obstacles are faced with six fences per circuit; five plain obstacles and one open ditch, with these being evenly split between the home and back straights. The fences themselves are stiff, but not unduly so, with the higher-than-average number of fallers likely to be at least partly related to the quantity of lower class and novice events held at the course.

Hurdles events feature just five flights per circuit; one just after the winning post, two in the backstretch and two in the home straight. Representing a straightforward jumping challenge, if there is to be a mistake made, it is most likely to come at the first in the back straight which comes up quickly after the turn and descends on the landing side.

Plumpton is first and foremost a frontrunner’s track, with anything able to poach an early lead often proving very tough to reel in around the tight turns and undulations. Given all those bends and gradients, it also makes sense that the more nimble and agile type of performer is at a distinct advantage over the long-striding galloping type. As ever with these more idiosyncratic venues, anything to have previously shown strong form at the track should automatically make it onto your shortlist.

Handy, quick jumpers, who waste little time in the air tend to go well over fences, with the location of the obstacles – particularly those in the back straight – enabling slick jumpers to gain lengths on the field.

Not an especially demanding track in terms of its layout, stamina nevertheless becomes vitally important when the rains arrive. Heavy ground around here can take some getting through and an ability to battle and stay become two of the main prerequisites for success in such conditions. This statement is especially true over hurdles, as the leaders do tend to kick for home from quite a long way out in events over the smaller obstacles.

Correct judgement of pace can be the difference between winning and losing around here. As can an awareness that, in soft or heavy conditions, the best ground lies to the outside of the track. As such, the mounts of riders with a solid course record can be well worthy of consideration. Looking races from recent years Harry Cobden boasts an impressive 26% strike rate and net win of £10.49 to £1 level stakes, with Tom Cannon (17%, £11.44) being the only other rider to reward level stakes support.

Turning to the trainers, the sadly departed Zoe Davison (14%, £36.10) topped the pile over this period, with Wiltshire based Seamus Mullins (15%, £7.65) also edging supporters into net win. Not the greatest track for jolly backers, the only race category to show a net win is that of the Bumpers (55%, £8.68).

A National Hunt-only venue, Plumpton operates during the core jumps season, with the track’s 17 fixtures taking place between the months of September and May. A steady stream of Monday afternoon fixtures makes up the bulk of the season and whilst these tend to be fairly moderate in terms of quality, the track does also stage some higher-profile events. The December Novices’ Chase tends to attract a classy sort, with the track’s signature event of the Sussex National then coming one month later in January.

The fact that much of the action takes place during the heart of the British winter period does mean that soft ground is the norm here – a fact exacerbated by the slow-to-drain clay subsoil at the course. When the heavens open above Plumpton the ground can become very testing, very quickly!