One of just two tracks in West Yorkshire, Pontefract racecourse lies only around 1km outside of the historic market town from which it takes its name. Whilst not the highest profile of tracks in the land, “Ponty”, or even “Ponty Carlo” (!) is nevertheless hugely popular with local racegoers, taking advantage of its proximity to the major urban hubs of Leeds, Bradford and Sheffield – all of which are only around 20-30 miles away – to regularly draw in the crowds.

And it has been doing so for some time now, with tales of racing in the Pontefract locale dating way back to 1648. The grounds of Pontefract Castle are said to have provided the stage in those early years, before political wrangling then saw the action up sticks to the local meadows. Seemingly ceasing to operate in 1769, racing returned at the current site in 1801, with the sale of 20-year members’ badges for a price of £50 helping to fund the building of the grandstand. And from there the track has only gone from strength to strength. 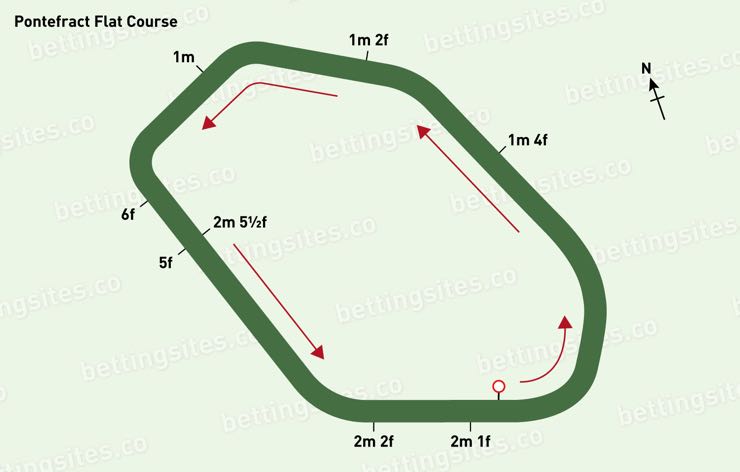 Initially a horseshoe shaped track, extensive works in 1983 rounded out the course, lending it its current left-handed, oval/pear-shaped configuration. With a circumference of 2m, Pontefract boasts the longest continuous racing circuit in all of British racing, and amongst the most substantial on the European continent. It is not only it’s length which differentiates it from the majority of tracks though as, in terms of tight turns and undulating sections, this West Yorkshire venue is widely viewed as being one of the trickiest in the land. This is a fact well illustrated by taking a virtual lap of the course.

Upon passing the winning post, runners are first greeted with a sweeping left-handed and downhill turn which leads into the long back straight. Initially level, this back stretch then again begins to descend close to the 1m2f starting point, before two slight dog-leg turns into another short straight section. It is on this part of the track that judgement of pace becomes essential, as the next turn, coming just prior to the 6f start, is very close to 90-degrees, and overshooting it can result in significant ground being lost.

Having turned into the sprint course, the field are then faced with a roller coaster of a finish, with rising and then dipping ground prior to a final 3f which climbs all the way to line, turning left-handed into the 2f home straight. Given all of these twists, turns and undulations, it is no surprise that Pontefract regularly draws comparison with the similarly tricky Brighton and Epsom Downs and course form tends to carry reasonably well between the three.

As a left-handed, turning track, logic would suggest that those drawn low should be at an advantage, and indeed that theory is borne out by an analysis of the results here. Looking at the outcome of 400 races held between 2011 and 2021, we find win percentages of 13.2% for low drawn runners, 9.5% for middle and just 6.8% for high. That’s a significant pattern, and one which holds true to some degree over all distances other than the minimum trip of 5f, which across 59 races returned figures of low 8.7%, middle 10.2% and high 7%.

In common with many undulating and turning venues, Pontefract is a track not particularly well suited to the long striding galloping type of performer, with such runners regularly struggling to maintain a rhythm around here. With balance being such a key factor towards success, nippy, well-balanced sorts definitely seem to hold the edge.

Next to balance in terms of importance comes staying power, as this is a track which places the emphasis firmly upon stamina rather than speed. This is a statement which applies even to the sprint course which, given its uphill final three furlongs, is one of the stiffest in the country. No matter what the distance though, that gruelling finale can be counted upon to ruthlessly expose any stamina limitations of the contenders. Look for runners with proven form at the distance – and if that form also came at this track, then so much the better.

In terms of pace, there does seem to be an advantage towards those who like to race prominently at trips of up to 1m2f. Fast starting front-runners can be the types to look for in these events, provided of course that they also have stamina on their side. Over longer distances the bias is not so pronounced, and success can be gained through keeping to the inside and riding a more patient race.

Given its somewhat unique attributes, Pontefract is a track which places significant demands upon jockeyship, with factors such as keeping their mount well balanced, maintaining the correct pace headed into the turns and, crucially not kicking for home too soon, being vital to success. As such the mounts of any rider with a solid record at the track are well worth a second look, whilst in general it may pay to favour experienced and high class jockeys.

Despite its tricky reputation, there have been a couple of avenues to a net win here for those who prefer the straightforward approach of simply backing the favourite. Again, looking at recent seasons, supporting the market leader in all 2yo events at the track would have returned a solid 46% strike rate and a level stakes net win of £8.59, with the 4yo+ handicap category (34%, +£4.58) also taking jolly backers into the black. Who said punting was hard?

A flat-only venue, Pontefract operates in line with the main Flat season, with its 16 (usually) annual fixtures taking place between the months of April and October. A real punter-friendly course, many of these meetings take place during the evening or on a Sunday afternoon, helping to maximise the appeal of the track.

This is an appeal further bolstered by the regular live music acts and hugely popular and well-attended Ladies’ Day in August each year. Whilst not immediately associated with high class racing action, the track does stage a respectable five Listed contests over the course of its season – headlined by June’s Pontefract Castle Stakes.