Located in the midst of the beautiful County Kildare countryside, and only 30km south of Dublin, Punchestown racecourse is ideally positioned to take its place as one of Ireland’s pre-eminent racecourses and, from relatively humble beginnings back in 1824, has now become firmly established as the home of the Irish National Hunt game.

One of the most prestigious racecourses on British or Irish shores, Punchestown plays host to 17 high quality fixtures over the course of the year; the highlight of the season at the track being the excellent five-day Punchestown Festival in late April, home to no fewer than 12 Grade 1 events, and widely considered to be Ireland’s answer to the Cheltenham Festival.

Punchestown racecourse consists of a chase course, main and alternative hurdles courses, flat course and a banks course. The chase, hurdle and flat tracks are broadly similar in layout – all being close to rectangular in shape – but the banks course is very different.

One of the first things to stand out at Punchestown over jumps is the excellent record of favourites in the non-handicap events. A substantial 44% of all such races have been landed by the jolly, which compares favourably with the 35% strike-rate generally observed across all races.

No real surprises on the trainer trends front, with the 22% strike rate of multiple Irish Champion National Hunt trainer Willie Mullins putting him ahead of the chasing pack. 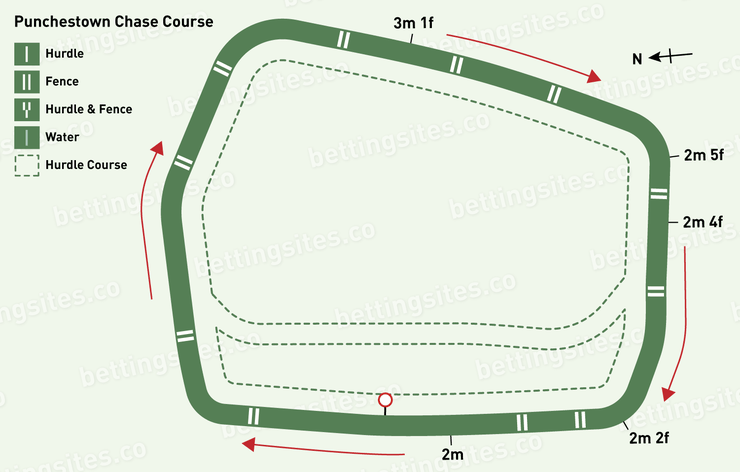 The chase course is the outer of the two main tracks at Punchestown, and therefore the longest at two mile per circuit. The undulating rectangular track features two turns of almost ninety degrees and two which are slightly more gradual. Passing the finish line for the first time, the runners will first meet three plain fences followed by an open ditch, before then moving into the back straight which features two more plain fences and a second open ditch. The four remaining plain fences are split evenly between the top section of the course and the home straight, with a run-in of just over a furlong following the final flight.

Overall, the fences at the track are stiff enough to provide a solid jumping test, without being as tough as those at some other venues in the UK and Ireland. The track is also viewed to be fair in regard to the type of performers it favours, with neither front runners, nor those who need to come with a longer run thought be at a significant advantage.

The most difficult aspects of the chase course come at the tight final turn for home, and the two fences which then appear in very quick succession in the straight. The quickfire nature of those two obstacles, combined with the fact that the final five furlongs climbs steadily uphill, can make for a particularly gruelling finish, especially in testing conditions. When the going is heavy it is worth paying close attention to the lighter-weighted runners, particularly over the longer distances. 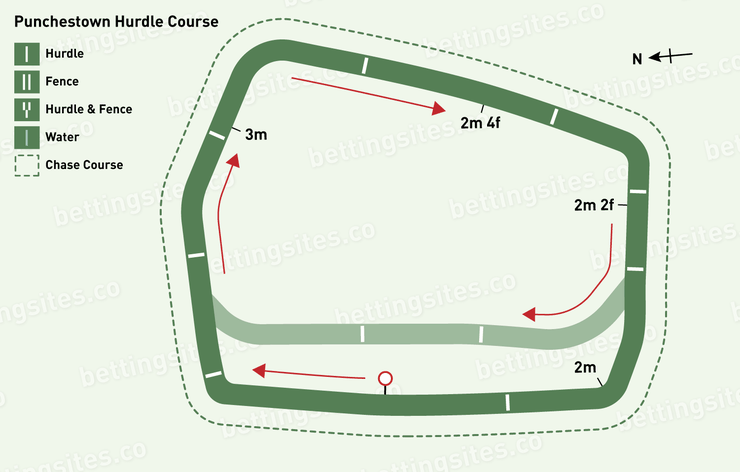 The main hurdle course features eight flights per circuit, is located on the inside of the chase course and follows a very similar configuration: again, being roughly rectangular in shape. However, the terrain is more undulating than on the chase course, and with a distance of 1m6f per circuit, it is also the tighter of the two tracks. These undulating and sharper characteristics place a greater emphasis upon the balance of the contenders than in the venue’s chasing counterpart.

Another consequence of the tighter track is that nippier front runners can be at an advantage, with the shorter straights and sharp turns making it more difficult to build up a head of steam for those attempting to make up ground.

When looking at the track from a difficulty perspective, the two areas which represent the biggest challenge are the tight second-last bend, and the downhill section after the runners have passed the winning post for the first time. If a horse is to come unstuck in a hurdles event at Punchestown, it will most likely be at one of these two locations.

Punchestown also has an alternative hurdles track which can be used in the events leading up to the big April Festival, with the aim of protecting the ground around the first and last bends, and in the home straight.

Effectively cutting off two corners of the main hurdles course, this is an even tighter affair than the usual hurdles track, and as such leans even further towards favouring those who like to race prominently.

Punchestown racecourse is unique in being the only Irish venue to feature a cross country banks course. This snaking, three mile-long track sees runners faced with both left and right-handed turns, and all manner of fences, bushes, walls and banks to be safely negotiated. The most notable obstacle of the course is its double bank fence, which must be tackled from both sides as a section of the course winds back on itself. A largely separate entity to both the chase and hurdles tracks, the final fence of the banks course is the only obstacle situated on the racecourse proper.

As with the majority of cross country or banks events, balance and jumping ability count for plenty at Punchestown, and any runners with a proven ability to handle this type of race are well worth a second look in the market. 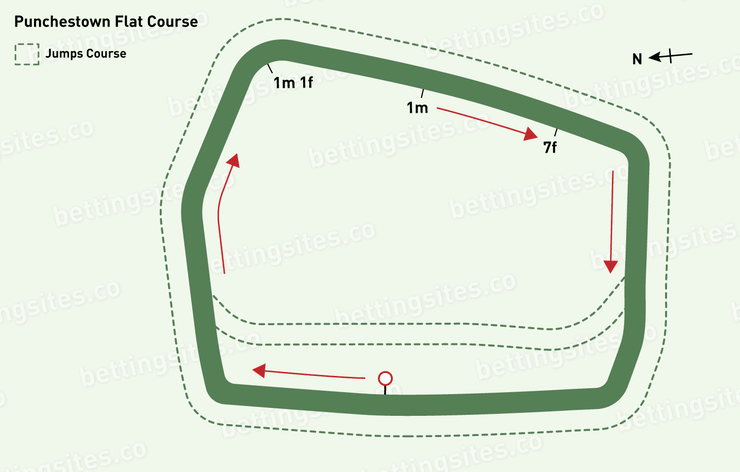 Punchestown stopped staging regular flat races in 2002 and focused solely on its National Hunt offering. The venue does however remain capable of staging flat contests over trips of six furlongs, seven and a half furlongs, 1m1f and 1m6f and, having not held an official flat race for 18 years, stepped in to assist with a backlog of outstanding flat fixtures in 2020.

Flat races at the venue are right-handed affairs featuring a steady climb over the final five furlongs, including throughout the three and a half furlong straight. Due to the fairly tight turns, a draw close to the inside rail is generally thought to be favoured, particularly at trips of up to seven and a half furlongs.