The county of Yorkshire is a real hotspot when it comes to British racecourses, and just about the most northerly of the tracks in the land of the white rose lies in the coastal town of Redcar. Situated just to the north east of Middlesbrough, and within hailing distance of the beach, this family friendly track lies in prime holiday-making territory and is a hugely popular venue with locals and tourists alike.

It was in fact on the beach itself where racing in the region first began, with the nearby Coatham Sands providing the stage during the 18th century. And it wasn’t until 1872 that the action moved inland to its current location, with the first grandstand at the track being built three years later in 1875. Falling into disrepair during the Second World War, Redcar soon rebounded – benefiting from the building of a brand new grandstand in 1964.

Despite its relatively low-key status on the British racing scene, Redcar has registered a number of notable firsts during its lifetime – becoming the first British track to instal CCTV, a timing clock and furlong marker posts. Perhaps not the greatest claims to fame we’ve ever heard but facing firsts none the less. 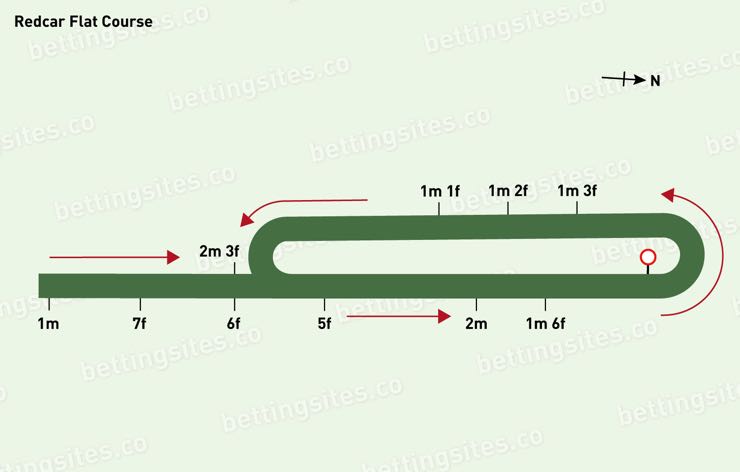 The track layout at Redcar resembles an elongated oval of around 1m6f in circumference, featuring two 5f straight sections and a pair of tight left-handed turns. Almost completely flat throughout, the turning sections are the only tricky aspects of this track, with the bend into the home straight in particular likely to test the balance of the contenders.

In addition to the oval section of the course, Redcar also features a three-furlong chute which runs directly into the home straight, creating the only straight and completely flat 1m turf course in the country. All events at 1m and below are held on the straight track, with those over longer distances taking in at least one of those two difficult bends.

In common with many coastal tracks, Redcar drains particularly well, which in combination with the summer scheduling, makes truly heavy ground something of a rarity around here – good to soft or better being the norm.

Analysis of the draw at Redcar doesn’t return the results you might expect, with the only bias in evidence coming, not on the round course, but on the 1m straight track. Looking at the 170 races held on the round course between 2011 and 2021, the win percentages returned were 9.9% for low, 8.7% for middle and 9.9% for high. A slight disadvantage to those drawn in the middle, but a dead even split between high and low.

It was a different story on the straight course however, with the 528 contests at 1m and below over this period showing a 9.5% win rate for low, 7.9% for middle and 6.7% for high. And on soft ground the bias was even more pronounced at 12.5% for low, 8.5% for middle and 4.4% for high. When the ground is riding soft on the straight cross, it appears that high is definitely not the place to be.

Whilst those two turns do demand a degree of agility, it should be noted that they make up only a small section of the total course. Overall, Redcar is very much a galloper’s track, with the long striding type of performer really able to open up during those long, flat expanses in the back stretch and home straight. With the ground after perfect, that really gives them the chance to put the smaller, nippier sorts under real pressure as they attempt to keep up.

The downside to those long straight sections is that it can make it pretty tough to judge the pace correctly. As such, punters certainly shouldn’t be surprised to see the lead change hands – possibly on multiple occasions – on the 5f run in. In terms of race tactics, it is by no means impossible to win from the front, but the general consensus is that the best strategy is to come with a sustained late run to pick up the leaders. Hold up performers are therefor generally well worth a second look in the market and may offer some value if missed by others.

At first glance Redcar’s long flat expanses wouldn’t appear to provide the toughest of challenges for the jockeys. However, the track is certainly not without its pitfalls and challenges. Maintaining momentum around the turns, judgment of pace, and timing a late run correctly are all absolutely crucial to success here.

And as with the majority of courses, it never hurts to have a rider with a solid track record on your side. Looking at the past few seasons Daniel Tudhope’s 20% leads the way in terms of strike rate, returning a narrow net win of +£2.57 to £1 level stakes. David Allan’s 10% strike rate over this period may not be anything to write home about, but it is he who leads the way in terms of level stakes net win with a whopping figure of £124.70.

No trainers have managed to edge supporters into the black over this same spell. Nor has it been the happiest of hunting grounds for favourite backers, with the two-year-old non-handicap events (44%, +£14.43) being the only lucrative race category.

They race only on the flat at Redcar, with the track’s season typically consisting of 18 fixtures and running between the months of April and November. Unsurprisingly, this means it falls into line with the main British flat campaign, and also takes advantage of the tourist friendly summer months.

With a number of Sunday fixtures throughout the holiday season, and a hugely popular Ladies’ Night in August, the focus is very much on a fun day out at Redcar, as opposed to a stream of high class racing. That said, the track does play host to a pair of Listed class events, in the shape of the valuable Two-Year-Old Trophy and Guisborough Stakes, both of which take place in late September/early October. The Zeltland Gold Cup handicap meanwhile is a prize regularly targeted by the top yards and provides an early season highlight in May.