Lying two miles to the southeast of the cathedral city of the same name, and close to 20 miles from both Leeds and York, Ripon racecourse enjoys a prime North Yorkshire location. Despite that proximity to those major urban hubs though, one of the most attractive features of the track known as the “Garden Racecourse” is its beautifully picturesque location in what used to be the smallest city in the country.

Nestled in the Yorkshire Dales on meadowland between the River Ure and the Ripon Canal, and adjacent to the Ripon City Wetlands, the track offers city dwellers an ideal opportunity to escape to the country for a day of racing entertainment.

It has done this ever since opening at its current Boroughbridge Road location back in 1900 – although racing in and around the area dates back much further than that, with meetings reportedly taking place on the nearby Bondgate Green from as early as 1664. Earning a place in the history books as the first location to stage an event for female jockeys in 1723, more recent times have seen this gem of a track crowned the “Best Small Racecourse in the North” on numerous occasions. 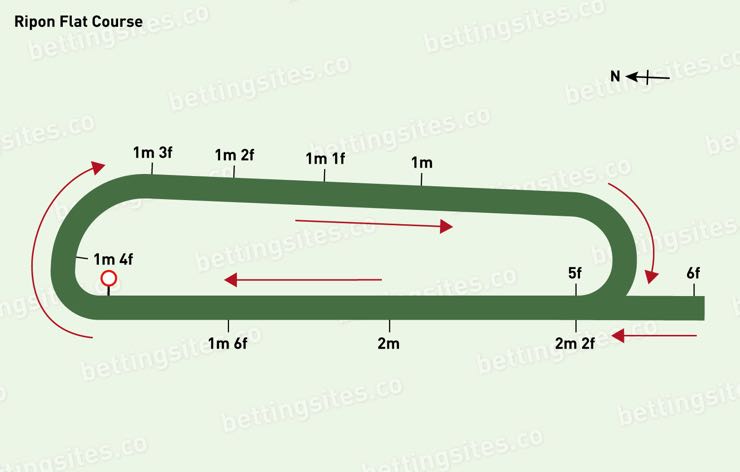 The course at Ripon is a narrow, right-handed, oval of around 1m5f in circumference, featuring long straight sections and very tight bends. Although these turning sections have been banked in an effort to make them easier to negotiate, they do still test the balance of the contenders, with the second half of the bend into the home straight being notably tricky.

Whilst the majority of the track rides fairly flat, things change markedly in the home straight which undulates throughout and features a significant ridge around a furling from home. In addition to the main round course, Ripon also features a 1f chute which runs directly into the home straight, enabling sprint contests over 5f and 6f to take place on a straight course.

Overall, there seems to be a bias against those drawn in the centre of the track on the sprint course, with an analysis of 465 such events between 2011 and 2021 returning win percentages of 11.2% for low, 9.4% for middle and 12% for high drawn horses. Note that when the going is described as soft or heavy, the edge appears to lie more in favour of the high numbers, with such runners returning a 13.7% strike rate over the period in question, compared to 9.6% for low and 9% for middle.

With its tight turns, you might expect there to be an edge against those drawn on the outside on the round course, and whilst this does turn out to be the case, it appears that the overall disadvantage is only slight. Again, looking at the 10 years between 2011 and 2021, all events on the round course returned win percentages of 13.8% for low, 14.3% for middle and 12.3% for high. That said, the low drawn runners do appear to enjoy a significant edge in the events over a mile – 13.8% low, 10.7% middle and 10.1% high – which makes sense considering the first bend comes up pretty quickly following the 1m start.

It takes a pretty well-rounded runner to succeed at Ripon, for whilst the long back straight is well suited to the galloping type of performer, much of the rest of the track, with its sharp bends and undulations requires a degree of agility and balance.

In terms of a pace bias, the general consensus is that this is a track which favours those who like to race prominently, particularly on good or quicker ground. Look for fast starting front runners on the straight course as, due to the undulations, it can be tough for those in behind to get into a rhythm and claw back the lead.

Three-time Champion Jockey Silvestre De Sousa seems to like it around here, with his 37% strike rate and very handy £21.34 net win to £1 level stakes over recent seasons putting him ahead of the pack. Daniel Tudhope (24% SR, £8.35LSP) is another rider who it has paid to follow over this period, whilst locally based handler David O’Meara (15%, +£14.74) tops the trainer’s table.

Whilst this has proven to be a tricky track for favourite backers overall, there have been a couple of routes to net win, with both the 4yo+ non handicap (56%, +£3.10) and 2yo handicap (62%, +£7.63) race categories edging jolly backers into the black.

A Flat racing-only venue, Ripon stages around 16 fixtures per season, all of which take place between the months of April and September, falling broadly into line with then main British Flat campaign. With events such as the “Big Night Out”, “Family Day” and “Children’s Day”, the track makes every effort to appeal to the more recreational racegoer, whilst also offering enough to please the hardcore racing fan as well.

Ripon can be counted upon to provide competitive racing fayre throughout the season, but its two clear standout events both come in August, in the shape of the Great St. Wilfrid Stakes – named in honour of the patron saint of Ripon – and the Champion Two Year Old Trophy which regularly attracts a field of promising juveniles.