Situated in the heart of the Irish midlands, Roscommon racecourse lies just outside the historic town of the same name, and in the vicinity of the impressive 13th century Roscommon Castle. Only around 75km to the northeast of racing hotspot, Galway, and enjoying excellent transport links with the capital city of Dublin, this small but welcoming venue rates a hugely popular summertime racing destination.

As is the case in much of Ireland, racing in Roscommon boasts a rich heritage, with the first events in the area – organised by the British military – taking place back in 1837. The opening of this track in 1885 then marked the beginning of the officially recognised action and, other than a 12-year absence brought about by the Second World War, the track has remained a constant feature of the summer sporting landscape ever since.

Despite an ability to stage both Flat and National Hunt action, Roscommon is used only sparingly in comparison with many other Irish courses, holding just nine meetings over the course of its season which runs from May through to September. All nine of those fixtures take place on either a Monday or a Tuesday, with a focus upon evening racing aimed at catering to the masses.

There may not be an abundance of them, but Roscommon’s fixtures do invariably attract the crowds, with the two-day meetings of June and July proving particular popular. In terms of individual contests, the track’s highest class race of the Grade 3 Kilbegnet Novice Chase leads the way over jumps, with the Listed Lenebane Stakes being the standout event on the level.

Roscommon has proven to be an excellent track for fans of trainer and jockey trends, with a whole host of riders and handlers rewarding level stakes support over the past few seasons. Of course, backing these blindly is no guarantee of success but the following information is still well worth noting.

This has also been an above average track for supporters of the market leader, no doubt down to the success of the top handlers. Unusually, backing the favourite in all National Hunt handicap contests returned a 33% strike rate and profit of £8.03 to £1 level stakes, with non-handicap chases (48%, +£3.61), Bumpers (62%, +£7.82) and 4yo+ non-handicap’s on the flat (71%, +£8.45) being the other race categories to bear fruit. 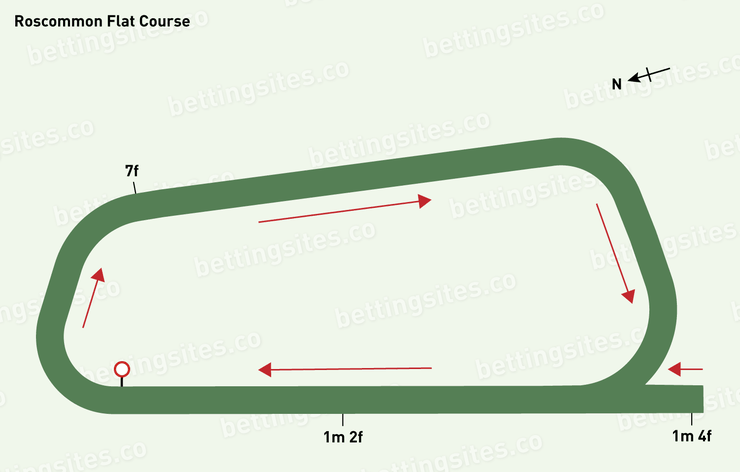 Right-handed and close to 1m2f in circumference, the course at Roscommon lies somewhere between an oval and a square in configuration, and as such features notably tight turns – particularly the second last bend which provides a real test of balance. Aside from the bends though, this is a pretty straightforward affair, being almost completely flat throughout other than in the 3.5f run-in, which inclines steadily to the line. In addition to the main round section of the track, the Flat course also features two short spurs, one in the back straight containing the 7f start, and one in the home straight where 1m4f events begin.

In terms of the draw, the only real bias comes in events over Roscommon’s minimum distance of 7f. However, whether it is the inside or the outside of the track which is favoured very much depends upon the size of the field. With nine or fewer runners, inside (low numbers) hold the edge, whereas in fields of 10+, the advantage switches to those drawn high. One explanation could be that low drawn runners are more likely to encounter traffic problems at the first bend in a larger field, whereas those drawn high can keep out of trouble.

Whatever the distance, this quick, sharp track very much favours speed over stamina, and is well suited to runners who like to bowl along in front. 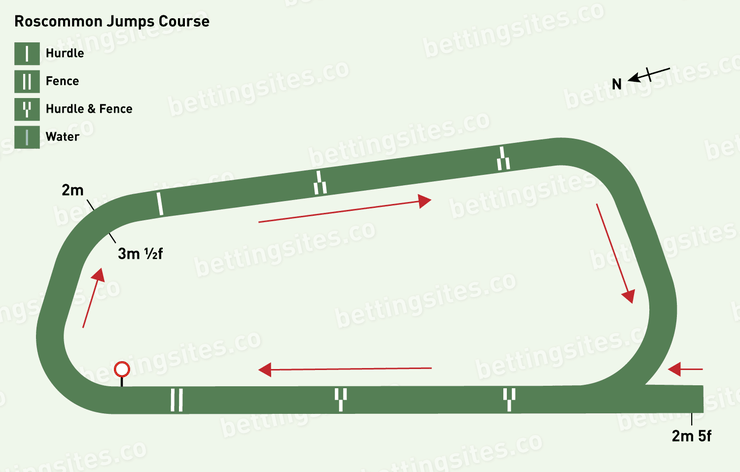 The National Hunt action takes place on the main round section of the course and is similarly suited to front runners and prominent racers. Anything able to dictate the pace and kick for home off the final bend can be mightily tough to reel in around here, particularly as the run for home following the final obstacle is only around 200 yards.

Those tackling the chase course are faced with five fences per circuit – two in the back stretch and three in the home straight. Positioned in order to allow the runners plenty of time to find a stride, and not being particularly stiff, Roscommon’s fences are amongst the easiest in the country. Given this relatively easy challenge, the course is viewed by many as providing an ideal starting point for the inexperienced novice chaser – and with many of the top yards regularly attending, can be a good place to spot a future star.

The hurdles track again features five obstacles per circuit, this time with three in the back stretch and only two in the home straight. This does result in a longer run-in following the final flight in comparison with the chase course, but that doesn’t seem to affect the pace bias, with those who race handily still holding the edge.