Set against the imposing backdrop of the San Gabriel mountains, there can be few more spectacular tracks in world racing than the California course of Santa Anita.

Located to the North East of Los Angeles, and first opening for business back in 1934, the course is one of the biggest and best on offer in North American racing.

Home to the prestigious Santa Anita Handicap, and the stage for the Breeders’ Cup meeting on more occasions than any other track, the venue will also forever be remembered as the course at which the legendary Seabiscuit made his final racecourse appearance.

One of the requirements of holding the Breeders’ Cup meeting is the ability to stage races on both turf and dirt, and Santa Anita is duly one of the most prestigious dual-purpose tracks in the US.

The main dirt and turf tracks follow the traditional oval layout that is so prevalent in US racing, and both feature long, sweeping left-handed bends. There are however additional elements to each course, with the turf course in particular featuring a layout rarely seen in a US track.

Triple Crown winning handler, Bob Baffert, has been the man to follow at Santa Anita, with the trainer of the brilliant American Pharoah boasting an impressive strike rate of a shade over 26% at the track. Peter Miller is the only other trainer to top the 20% mark.

Looking at the jockeys, Flavien Prat, Mike Smith and Joel Rosario all top that 20% strike rate, with Rosario leading the way with over 25% based on recent figures. 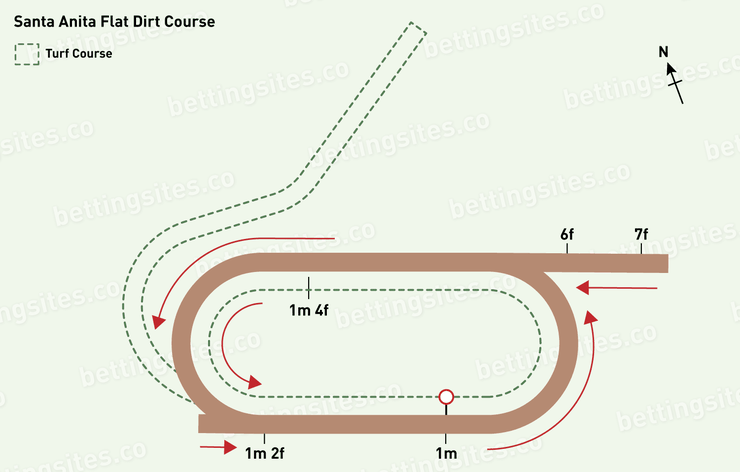 But for a brief experiment with a synthetic surface between 2007 and 2010, this left-handed oval track has maintained a natural dirt surface since holding its first race over 80 years ago. An upgraded drainage system, added to the track in 2019, is expected to improve the consistency and quality of the surface, and resolve safety issues experienced earlier in that same year.

One circuit of the dirt track measures 1m, with the starts for six furlongs, 1m, 1m½f, 1m1f and 1m4f all situated on the main oval. Seven furlong events begin via a spur leading into the back straight, with 1m2f contests starting at the end of a shorter spur which enters the home straight.

It is generally thought to be a benefit to close to the pace on the Santa Anita dirt, with front runners enjoying a better than average record, particularly in the events over the six furlong distance.

Looking at the draw, it is the low numbers which are favoured in all races, but again more so over the shorter trips. Whilst the bias isn’t as strong as the distance increases, those starting from a double figure stall regularly find themselves up against it in events featuring two turns. 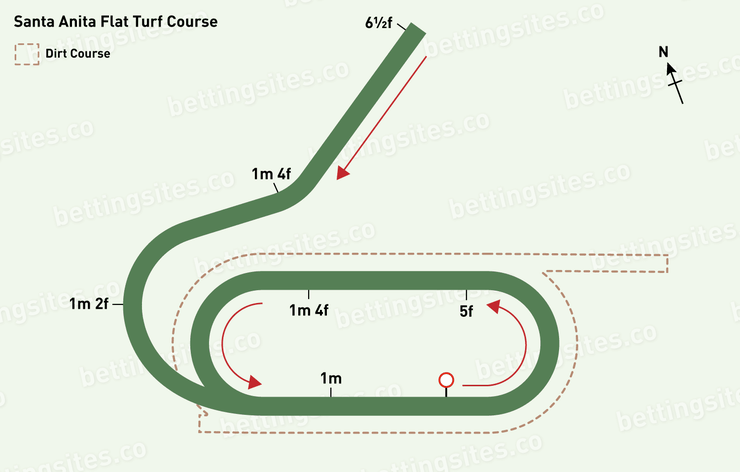 The main oval turf course was added to the venue in 1953 and lies directly inside the dirt track. All turf contests at Santa Anita take in at least a section of the main track, but only the five furlong and mile events currently start within the oval.

Measuring seven furlong around, the course is slightly sharper than its dirt counterpart, and as such the draw can be of even greater significance. As with the majority of turning tracks, inside is the place to be, with low to middle draws considered to be much the best. Double figures in particular can be at a big disadvantage around here

This winding downhill track, which first turns gradually right-handed, before moving into a more sweeping left-handed bend onto the racecourse proper, features starts for events over six and a half furlongs, 1m2f and 1m4f. It should however be noted that the six and a half furlong events have been suspended indefinitely (as of 2020) as the track considers alternative options, including the addition of further spurs to the main track, and the possible shortening of the majority of sprint races to five furlongs or five and a half furlongs.

Unlike the dirt track which seems to favour prominent runners, there isn’t thought to be any such inherent bias in either the main turf or Hillside courses. With the 1m4f races beginning headed into a left-handed turn, and the 1m2f start actually sitting on a left-handed bend, low numbers towards the inside rail are again at an advantage.