Of the three racecourses in the county of Somerset in the south-west of England, the newest lies in the village of Orchard Portman – situated just to the south of the country town of Taunton from which the track takes its name. A fine example of the smaller rural venue, which adds such variety to the British racing scene, the track affords spectacular views of the Blackdown Hills to the south and the Quantocks to the north.

The newest track in Somerset it may be, but having first opened for business in 1927, Taunton is certainly no spring chicken. And the action in the area actually dates back much further than that, with events reported at nearby Broomhay from as early as the mid-18th century. Independently owned by Taunton Racecourse Ltd, the modern track benefited from the building of a new Grandstand in 1969, later followed by the Paddock Stand and AP McCoy stand – a far cry from the wooden, shed-like, installations of the early years. The 1960’s also saw the racetrack itself extended using ground dug up in the building of the M5 motorway. Offering a friendly, informal experience, this track in prime cider country is well worth a visit. 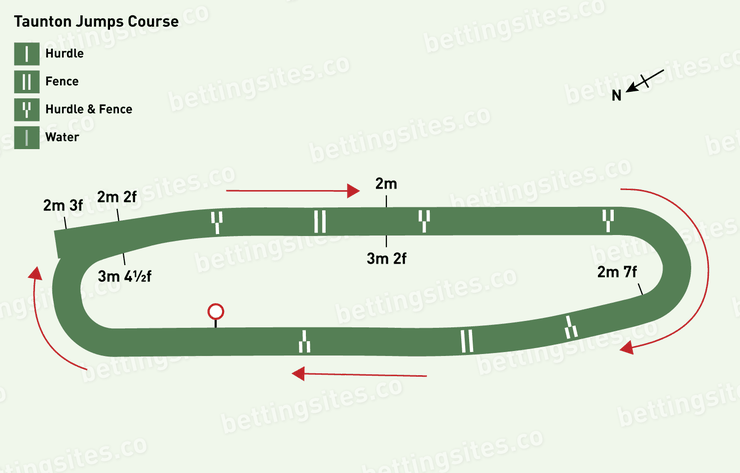 Taunton’s 1m2f right-handed oval track is more elongated than the norm, featuring two substantial straight sections and a pair of tight semi-circular bends. Of these two turns, the one following the winning post is particularly sharp, placing a real emphasis on the balance of the competitors. Relatively flat throughout, the only real undulating sections come courtesy of the small descent on the turn into the three furlong home straight, and in the straight itself which climbs steadily all the way to the line.

The chase track consists of seven fences per circuit; four in the backstretch, including two open ditches, and three final plain fences in the home straight – with a run-in of only 150 yards after the last. The fences themselves aren’t particularly imposing, but Taunton does nevertheless feature a higher than average casualty rate. Possible reasons for this being the prevalence of lower-class races, and the fact that the four obstacles in the backstretch do come up pretty quickly after one another. The first in the home straight also regularly proves troublesome, largely due to the fact that it comes following a downhill turning section of the track.

Those tackling the smaller obstacles are faced with five flights per circuit; three in the backstretch and a final two in the home straight. In common with the chase track, the hurdles course features an obstacle following the downhill section on the turn for home, and if there is to be a mistake, it will most likely come here.

Whilst the sharp turns undoubtedly favour the prominent, nippy type of performer, the long straight sections are more suited to the long-striding galloper, resulting in a track that is pretty fair overall. That said, front runners with proven stamina on their side can prove pretty tough to reel in and are well worth a second look in the betting – particularly should they have solid previous form at the track. Don’t necessarily discount the hold-up performers though, as that long home straight does provide ample opportunity to reel in the leaders should they be able to muster a power-packed finish.

Paul Nicholls and his chief jockey Harry Cobden lead the way in terms of strike rate here with respective figures of 26% and 25%. The Nicholls runners are however invariably very well backed, and supporting either man to level stakes would have resulted in a loss over the past few seasons. With a strike rate of 17% and a net win of around £6 to £1 level stakes, Sam Twiston-Davies is the only rider to have edged into a net win over this period, whilst Jeremy Scott (21% strike rate, around £40.50 level stakes net win) has been the most financially rewarding trainer to follow.

Taunton must be just about the most consistent track in the country for favourite backers, with every race category barring the National Hunt Flat races showing a net win for supporters of the market leader over recent seasons. Bumpers aside, backing very jolly at this track would have returned a 43% strike rate and around a £25.50 net win to £1 level stakes.

Operating predominantly during the winter months, Taunton stages around 15 National Hunt fixtures across the course of its season which runs from October through to May. Whilst the track doesn’t boast any standout Graded level contests, its location in the midst of a number of top training yards does see the course attract a higher than average calibre of performer. Multiple champion trainers Paul Nicholls and Nicky Henderson are both frequent visitors to the track.

Despite the fact that the lion’s share of the meetings take place in the depths of winter, the ground at Taunton does drain particularly well, resulting in ground that is significantly better than elsewhere in the country when the heavens open.