The county of Yorkshire is a real hotbed for racing in the UK with a total of nine racecourses residing in White Rose country, including this track in the north of the region. Lying just to the west of the market town of the same name, and only 20 miles from the bustling city of York, this track is hugely popular with racegoers in the north, and those from further afield.

And the course has been attracting racegoers for quite some time now, with the original track of Hambleton Hills first staging events way back in 1612 – joining Newmarket and York as one of only three officially recognised courses in the country at that time. The curtain came down on Hambleton Hills in 1775, with racing then re-emerging at the current site in 1855. Still owned by the Bell family who founded the track, Thirsk has plenty of history behind it, but also boasts excellent facilities, and prides itself on providing racegoers with a thoroughly modern race day experience. 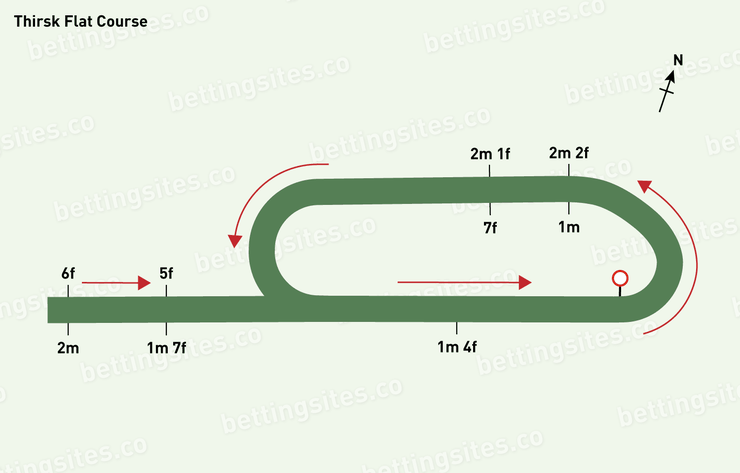 The track at Thirsk is a left-handed oval of close to 1m2f in circumference, featuring two longish straight sections, and two wide, but sharp, bends. In addition to this main round section, the track features a chute leading directly into the four-furlong home straight. This two-furlong extension contains the 1m7f and 2m starting points and enables events over five furlongs and six furlongs to take place on a straight course.

Of the bends, the one that leads out of the home straight is the more gradual of the two and tends not to cause runners too many issues. However, the second turn can prove problematic, with the width and sharpness of the bend occasionally seeing unbalanced runners drift wide and lose ground. Whilst the backstretch and two bends are almost completely flat the home straight does feature undulations throughout – the most pronounced of which come in the chute section of the course.

With the racing at Thirsk taking place exclusively between Spring and early Autumn, the track tends to avoid extremes of going thanks to decent drainage and an effective irrigation system that can be utilised during warmer, drier, periods.

A popular course with both trainers and jockeys, Thirsk is generally a fair track. That said, certain types of runners do tend to go particularly well. Speedy, prominent racers are well worth a second look, with an ability to maintain balance around the final bend, and then kick into the straight often proving to be a race-winning manoeuvre. Horses to be wary of are the more galloping types, with such runners often finding it difficult to settle into a rhythm thanks to the relatively sharp bends and undulations in the straight.

The general perception is that there is a big advantage in being drawn high against the stands rail on the straight course. However, the figures suggest that this edge may not be quite so strong as commonly believed. An analysis of all 457 races held on the straight course between 2011 and 2021 showing win percentages of 8.5% for low, 9.8% for middle and 9.7% for high. Regardless of the figures though, the field does tend to flock over to the stands rail, which can result in congestion and significant traffic problems for those looking to come with a late run. It is actually on the round course that the bias against the low runners is more pronounced, with all such events over the same 10-year period returning win percentages of 11.4% for high, 11.3% for middle and only 8% for low.

As with the majority of British tracks, Thirsk does take a bit of knowing, with factors such as maintaining momentum around the bends, and the correct judgement of pace often proving crucial to success. And, as ever, there are those riders who seem particularly well suited to the task at hand. Two men stand out from the crowd when looking at the results over recent seasons. Daniel Tudhope leads the way with a 21% strike rate and a net win of around £36 to £1 level stakes, closely followed by former champion Paul Hanagan (17% strike rate, over £31 level stakes net win). Local handler David O’Meara (14% strike rate, over £18 level stakes net win) is the only trainer to reward level stakes support over this period.

Thirsk has proven to be a rewarding track for supporters of the market leader over this recent spell. Backing the favourite in all non-handicap events at the track would have returned a solid 52% strike rate and a level stakes of almost £23, with the handicap events for runners aged four and older also proving lucrative (31% strike rate, around £25 level stakes net win).

A flat-only course, Thirsk operates in line with the main flat racing season in the UK – staging its 16 fixtures between the months of April and September. Ideally located close to the training centres of Malton and Middleham, the track is a popular destination for many of the top trainers in the north, and generally boasts higher than average field sizes as a result.

A lesser-known Classic venue having stepped in to stage the St Leger in place of Doncaster back in 1940, these days it is a pair of one-mile handicap contests that light up the season. The most famous of all is the Thirst Hunt Cup which takes place in early May which, having first been run in 1862, is almost as old as the track itself. Held over the same course and distance, the Summer Cup of August provides a later season target for the more talented handicappers and invariably attracts a substantial crowd.