Lying on the southeast coast of Ireland, just outside the town of Tramore itself, and only around 12km to the west of the world-famous crystal making town of Waterford, we find yet another of Ireland’s many picturesque racetracks. Being perched upon a slightly elevated patch of land, visitors to the track – known to most simply as Tramore racecourse – are afforded wonderful panoramic views of the Tramore Strand, providing a tranquil backdrop to the entertainment on the track.

It was actually upon the sandy shores that the action initially took place in this area of the Emerald Isle, with the first beach race meeting being held way back in 1785. And so it continued until 1911, when damage to the course following a major storm in the area sparked the decision to move inland, with this course opening just one year later in 1912. Benefitting from €5 million worth of improvements since being taken over by a consortium of investors in 1997, the course continues to be a popular destination, both with Irish racegoers, and the many tourist visitors to the area.

Whilst both flat and National Hunt contests take place at Tramore, the fixture list here is heavily weighted in favour of the National Hunt game. Kicking off with a hugely popular New Years Day meeting, featuring the Grade 3 New Year’s Day Chase, the action then continues right through until late October. The major highlight of the year coming in the shape of the always well-attended four-day August festival.

One of the trickiest tracks to ride in the whole of Irish racing, Tramore places a real premium upon jockeyship. As such, any rider to have previously shown the tactical nous and bold approach required to succeed can be worth keeping onside. When looking at the results over the recent seasons Paul Townend, with a strike rate of 42% and a net win to £1 level stakes of almost £41, and Brian Hayes (14% strike rate, over £37 level stakes net win) are the men who stand out from the crowd. Amongst the trainers, multiple Irish Champion Willie Mullins (43% strike rate, just under £13 level stakes net win) fares well here, as does W J Burke (19% strike rate, over £24 level stake net win).

A tough track for favourite backers overall, the non-handicap chases are the only National Hunt race category to show a net win to level stakes over the most recent period – and even then only to the tune of a paltry £0.32. The sample size on the flat requires all data to be treated with a pinch of salt, but jolly backers may be encouraged by the 67% strike rate and a £4.61 net win returned across all non-handicap events on the level. 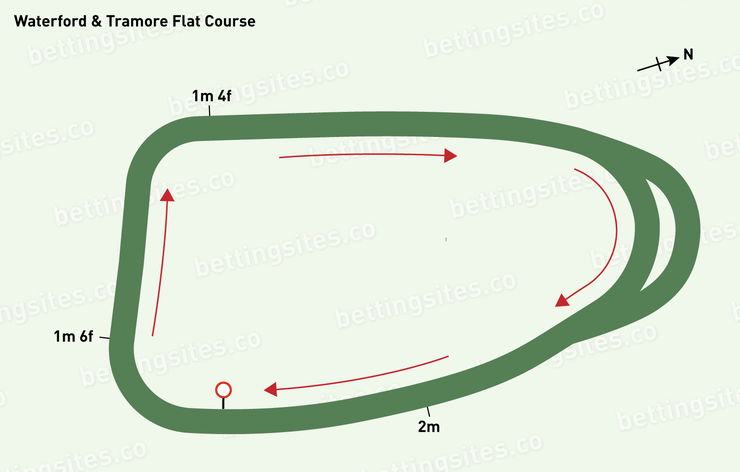 One of the tightest tracks in the whole of Irish racing, Tramore’s right-handed circuit measures only seven and a half furlongs in circumference and features sharp turns and undulations throughout. Taking in a circuit from the winning post, the course climbs uphill as it turns ninety degrees into the straight leading away from the stands, before another right angular bend out into the backstretch. From this point, the ground begins to descend sharply around the long sweeping bend into a home straight of just over a furlong, with this final section then rising steeply to the line.

One of Ireland’s more unique flat courses, racing takes place only over the distances of 1m4f and 2m and, unlike the vast majority of tracks, there are no starting stalls at the course, with all races beginning using the flag start method.

With its compact circuit, tight turns and undulations, Tramore is something of a nightmare for the long-striding galloper who needs time to settle into a rhythm. Nimble, well-balanced individuals are far better suited to this challenge, particularly those who like to race up with the pace. That said, hold up performers should not be dismissed entirely, especially when the word soft enters the going description. Unsurprisingly, given the distinctive demands of the track, this is very much a venue that produces course specialists – anything with a solid previous effort at the course being well worth a second look in the market. 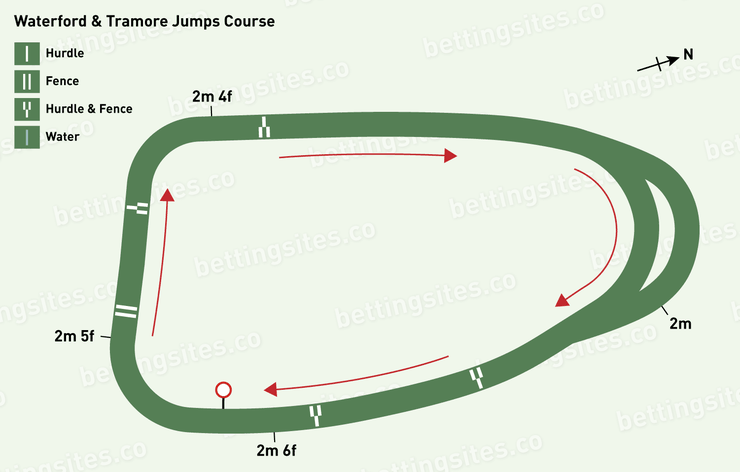 For most of its duration, the National Hunt track takes place on the same course used in flat contests. The one variation is that the jumps course uses an alternative bend leading from the backstretch and round into the home straight. Lying to the inside of the corresponding turn on the level, this has the effect of making the National Hunt track even sharper than its flat counterpart.

In addition to being well balanced and adaptable, those who like to race handily are at a definite advantage on the National Hunt course – a bias which is particularly pronounced in the chase contests. Speed is very much the name of the game at this track, with frontrunners and prominent racers having a much better record than those who race in mid-division or look to come with a late run.