Of the 59 racecourses spread over the length of mainland Britain, a total of nine are clustered in the racing-loving county of Yorkshire. And included amongst that number is this small but popular track in the south-west of the region. Sitting just outside the town of Wetherby itself, 12 miles to the north-east of the hustle and bustle of Leeds, and close to the major Yorkshire training centre of Malton, Wetherby Racecourse is advantageously positioned to attract both racegoers, and the runners and riders who provide the entertainment.

Racing first took place in this corner of White Rose country back in the early 19th century, with the nearby Scaur Bank at Linton providing the stage for the early action. And at Linton it remained until 1890, when a dispute over land rent prompted a move to the current York Road site in 1891. Beautifully nestled in 300 acres of parkland, the course has benefited from substantial investment and improvements over the years, including the opening of the £4 million Millennium Stand in 1999. Boasting high-class action on the track, and classy facilities off it, this gem of a Yorkshire course looks set to thrive for some time yet.

For the vast majority of its lifetime, Wetherby had been a National Hunt-only venue. However, that all changed in 2015 when the track introduced a smattering of flat cards to its racing calendar. These days the course lays on around 20 meetings per year, with the jumping action taking place between October and April, and the flat taking over during the warmer months.

Traditionally a jumps racing venue, it is over obstacles where the course’s classiest contests are to be found, with Wetherby laying on a trio of Grade 2 events over the course of the season – the big headline act coming in the shape of the Charlie Hall Chase of late October/early November each year. Won by the likes of Cue Card, Silviniaco Conti and See More Business, this staying event is the real jewel in the Wetherby crown. Of course, high class chasing isn’t for everyone, and if the sight of men and women running around in furry suits is more your thing, the track is also the traditional home of the Mascot Gold Cup.

It may only have been with us since 2015, but it doesn’t seem to have taken Daniel Tudhope long to get to grips with the demands of Wetherby’s flat course. Looking at the most recent seasons, the Scottish native tops the jockeys table with an impressive 38% strike-rate and net win of almost £70 to £1 level stakes. Paddy Brennan (26% strike rate, around £13 level stakes net win) leads the way over jumps over this period. 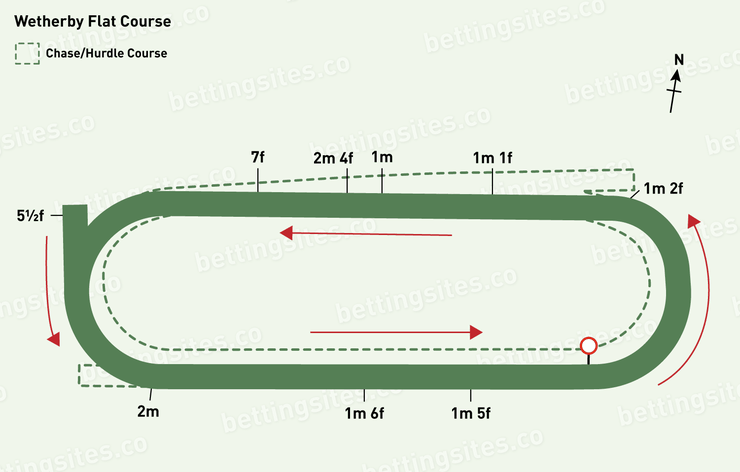 Wetherby’s left-handed track is laid out in an elongated oval, featuring two long straight sections and a pair of fairly steady bends. Only mildly undulating, the course descends gradually along the back straight and around the turn for home, before then beginning to climb gently up the home straight to the line. There is no straight sprint course at the track, with the shortest contests over five and a half furlongs beginning via a short spur at the end of the back straight.

With those moderate undulations, manageable turns and long straights, this is a track which really enables the long striding galloper to stretch out, and such animals tend to hold the edge over smaller, nimbler types who may struggle to keep pace over those straight expanses. The track also appears to slightly favour prominent racers, with contenders setting out to make a bold bid from the front regularly faring well. Hold-up performers certainly shouldn’t be discounted though, as the four furlong home straight provides ample opportunity to come with a late withering run.

With all events on the flat featuring at least one left-handed turn, logic would suggest that there may be a slight bias in favour of the low drawn runners. However, that isn’t really borne out when looking at the results between 2015 and 2021, with an analysis of the 128 flat contests to take place over that period showing win percentages of 10.1% for low, 11.2% for middle and 9.5% for high. It should be noted that the sample size is only relatively small at this stage, and stronger patterns may emerge in time.

Generally considered to be a fair course, all types of horse have been seen to prevail around here, but, in common with the flat course, the National Hunt track does seem particularly well suited to the longer-striding animal. Runners who are able to jump boldly towards the front, maintain a solid rhythm and judge the fractions correctly often prove mightily tough to reel in. 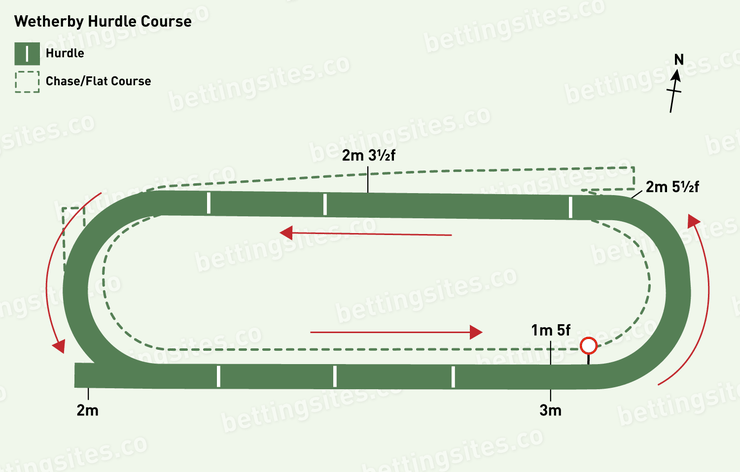 Hurdles contests take place on the exact same course as is used in the flat events and feature a total of six flights per circuit; three in the back straight and three in the home straight, with a run-in of close to 200 yards following the final jump. 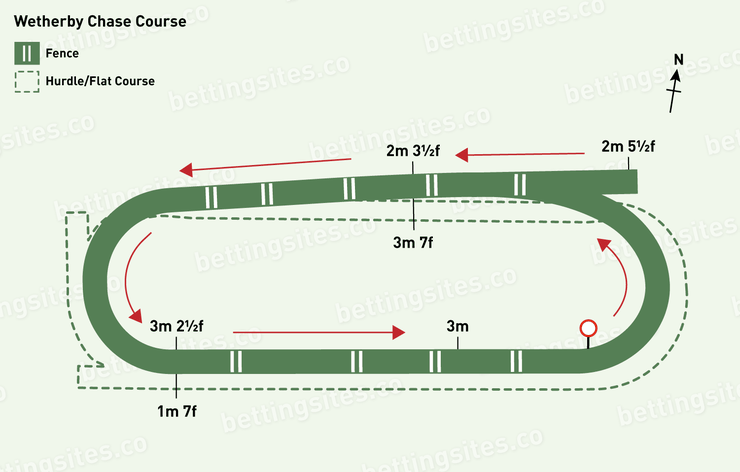 The chase track meanwhile follows broadly the same configuration, but lies to the inside of the hurdles track around the bends and in the home straight, but switches to the outside in the back stretch. Runners tackling the larger obstacles are faced with a total of nine fences per circuit; five in the back straight – including two open ditches – and a final four in the home straight, with again a run in of just under a furlong after the last. Previously amongst the toughest in British racing, the fences aren’t quite so stiff these days, but do still demand accuracy.