Wincanton Racecourse has one of the most interesting settings of any track in Britain. A nine-hole golf course sits in the middle of the circuit but rarely is it good weather for golf during a meeting at Wincanton.

Racing begins at the Somerset track for the season in October. From there, conditions tend to worsen as the rest of the meetings run through the winter and into early spring. Racing fans are a hardy bunch though and good numbers head to Wincanton whatever the weather for the biggest meetings of the year with highlights including the Badger Ales Trophy in November and the Kingwell Hurdle in February which is the final trial for the Champion Hurdle at the Cheltenham Festival the following month.

Wincanton has just one circuit. This is divided into separate courses for chase and hurdles races and whilst they each have slight differences, jockeys and horses by and large have to cope with the same characteristics. The most notable of these characteristics are the tight turns and the sharp nature of the track which is among the fastest National Hunt courses in Britain when the ground is firm underfoot. 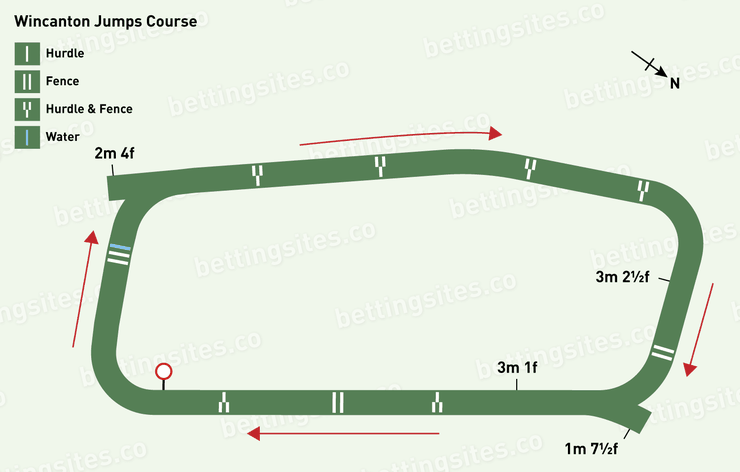 Bula, Kribensis and Katchit are three of the horses to have won the Kingwell Hurdle before going on to win the Champion Hurdle. A trip to Wincanton remains the plan for many trainers ahead of a trip to Cheltenham (notably Paul Nicholls whose Ditcheat base is just a 20 minute drive away) but the two courses provide very different challenges.

Wincanton is a largely flat, right-handed course. There are some minor undulations to cope with but these tend to aid speedier horses rather than those who rely on their stamina as the climbs are relatively easy and the main downhill portion comes on the run-in for home which favours horses who have the turn of foot required to put themselves into a commanding position.

Jockeys who are inexperienced at Wincanton can often find themselves caught out by not having the right position as they head towards the business end of the race. Whilst it is preferable for horses to be held off the pace for the majority of either steeplechases or hurdles, making a decisive move at the right time is key here. That is particularly true for chases as the final three fences come close together on the home straight.

There is, however, a chance of late drama in steeplechases at Wincanton due to the stiffness of the fences. Tiring horses who are being asked for their maximum effort in the closing stages can often make mistakes over those last three fences even if they’ve jumped well during the rest of the race. This is exacerbated when it is wet as Wincanton becomes a much tougher test of stamina when the ground gets soft.