The West Midlands city of Wolverhampton boasts a long relationship with the sport of horse racing, with the first events in the area taking place at Broad Meadows back in 1825. The closure of that site in 1878 then triggered a hunt for a new home, with the action shifting to Dunstall Park 10 years later in 1888 – and there it has remained ever since. Sited in the midst of over 100 acres of grasslands, but only a mile from Wolverhampton city centre, this Arena Leisure Company-owned track provides an accessible oasis of racing action amidst the hustle and bustle of the urban sprawl.

It became the UK’s first floodlit track in 1962, and subsequently the first to stage a prime-time Saturday evening fixture that same year. The track has benefited from significant investment over the years, including the building of a new grandstand in 1993. Hugely popular, both with local racegoers and those from further afield, the course lays on one of Britain’s most modern race day experiences and is well worth a visit. 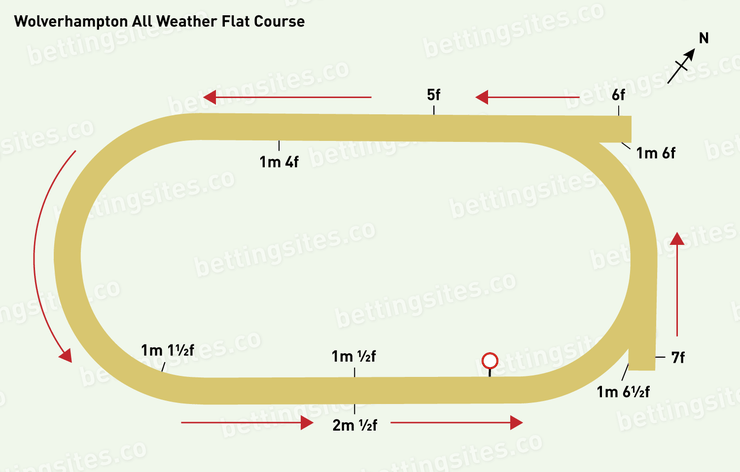 A left-handed oval of just under a mile in circumference, the Wolverhampton track features fairly short straights and tight turns – having much in common with the type of layout so prevalent in US racing. In addition to the main oval course, the track also features two short spurs; the first of which runs into the back straight and contains the six furlong and the 1m6f starts, with the second leading directly into the bend out of the home straight and featuring the seven furlong and the 1m6½f starts.

Given the sharp bends and relatively short straight sections of around two furlongs, Wolverhampton does tend to suit nippy sorts who are able to race prominently, rather than the longer striding animal that needs time to build up a head of steam. That said, it is still possible to come with a late run around here, with the holdup performers not inconvenienced by the kickback to anything like the extent as in the Fibresand days of yesteryear. Reports from most jockeys suggest that, although the course is tight around the bends, it is very well laid out and generally fair to most types of runner.

The general consensus has it that it pays to be drawn low over the minimum trip of five furlongs, due to the relative proximity of the starting point to the first bend. However, that view is not really supported by the results. Looking at all 535 contests held over this distance since the installation of Tapeta in 2014 we find win percentages of 11.3% for low, 11.5% for middle and 11.6% for high – almost perfectly fair. Moving up in trip to the six furlong and seven furlong contests, it seems that middle is the place to be, with an analysis of the 2,463 such events to take place over this period showing win rates of 10.1% for low, 12% for middle and 10% for high.

Over the one mile trip high numbers seem to hold a slight edge, but the strongest bias actually comes over the longer distances. Looking at the 737 contests held over 1m4f and beyond, we find figures of 9.5% for low, 14.1% for middle and 13.4% for high, suggesting that those drawn against the rail on the inside are at a definite disadvantage.

On first appearances Wolverhampton would seem to be a relatively straightforward track to ride, with the main demands on jockeyship being the importance of obtaining a solid position heading into the bends. And looking at the results over the last few seasons no rider has really been able to pull clear of the pack, with Jack Mitchell (21% strike rate, over £2 levels stakes net win) being the only rider to (just) edge supporters into the black. The trainer trends do however provide a couple of far more lucrative trends, with both David Loughnane (13% strike rate, around £41.50 level stakes net win) and especially Tom Dascombe (16% strike rate, over £90 level stakes net win) delighting supporters.

A very tough track for supporters of the market leader overall, almost all race categories have shown a significant loss – the only exception being the two year old handicap contests (35% strike rate, over £8 level stakes net win).

Wolverhampton has staged just about all varieties of racing action over the course of its lifetime. Home to both flat and National Hunt fare in years gone by, 1993 saw the installation of a Fibresand all-weather course alongside the existing turf track. Then in 2004 the course switched exclusively to all-weather racing, with the turf and Fibresand tracks being replaced by a single Polytrack circuit. The modifications weren’t quite finished there though, as due to the degradation of the Polytrack surface, 2014 saw the track completely re-laid with Tapeta – a mixture of sand, fibres, rubber and wax which is now also used at Newcastle’s all-weather course.

Staging around 80 fixtures right throughout the year, including a steady stream of evening meetings during the winter months, Wolverhampton is just about the busiest track in the country. Whilst the focus is on providing quantity rather than top class quality, the track does take part in the All-Weather Championship series, in addition to staging a Lincoln Trial and one Listed class event in the shape of the Lady Wulfruna Stakes in March.