Located in the south-west Midlands, the county of Worcestershire boasts a number of claims to fame, including a beautiful cathedral, world renowned porcelain and of course one of Britain’s finest condiments. And on top of all that, the region is also home to an excellent racecourse. Located at Pitchcroft Park, only around a mile outside the town from which the county takes its name, lies Worcester Racecourse – one of Britain’s most historic tracks.

It was all the way back in 1718 that racing first took place here on the banks of the River Severn, and the site has played a prominent role in the area’s sporting culture ever since – also staging football, rugby and bare knuckle boxing over the years. Operated by the Arena Racing Company since the year 2000, the racing very much takes centre stage these days at what is a hugely popular summertime track. 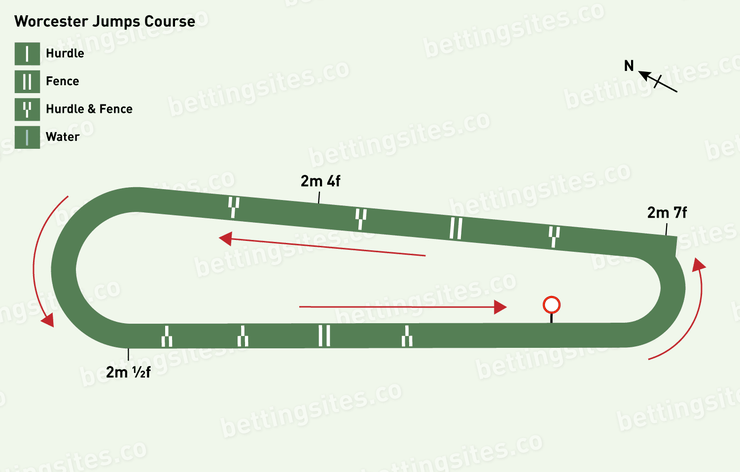 The Worcester track has experienced numerous layout changes over the course of its 300-year history, even utilising a figure of eight configuration at one stage. Those twists and turns are however a thing of the past, with the current layout being a far more conventional left-handed oval of close to 1m5f in circumference. Featuring two extensive straight sections of around four furlongs, a pair of sweeping turns, and being almost completely flat throughout, this is a good galloping track – one that is well suited to the long striding type of performer. In addition to the main oval course, the track also features a short spur leading into the back straight from which contests over 2m7f begin.

Runners tackling the chase course are faced with a total of eight fences per circuit, four in the back stretch and four in the home straight, with a run-in of close to a furlong following then last. The portable fences – which can be moved off the track and replaced by hurdles as and when required – are of only average difficulty, with the open ditch in the back straight considered to be the trickiest. Given the easy jumping challenge and uncomplicated nature of the layout, Worcester is viewed as the ideal track for the novice chaser, and can be a good place to spot a future star.

Events over the smaller obstacles feature six flights of brush hurdles per circuit. Resembling mini-fences, brush hurdles take more jumping than the flimsier type of obstacle more commonly used in UK racing. As such, the pace can be a little slower than in hurdles contests elsewhere as the field sensibly treat the obstacles with a little more respect.

Given the long straight sections and smooth bends, Worcester is a pretty fair track from a pace perspective. Those who like to lead shouldn’t have too much trouble getting into a nice rhythm out in front, and can prove tough to peg back in quick conditions. But on the other side of the coin, a four-furlong home straight does give those who like to come with a late run plenty of time to get organised. In softer conditions – or if they have gone too quick up front – it certainly isn’t unusual to see one produced late to score. Whatever the preferred running style, it’s very unusual to see any hard luck stories around here, with the best horse on the day usually coming out on top.

Featuring such easy turns and with no real undulations to speak of, this certainly isn’t the trickiest of tracks for either runner or rider. That said, it can be a little tricky to judge the pace correctly in those long straight sections and, as ever, it never hurts to have a jockey with a solid record at the track on your side. When looking at the results over the past few seasons it is Shane Kelly who has been the man to follow, posting a 17% strike rate and an excellent net win of almost £55 to £1 level stakes. Trainer Philip Hobbs can better even those figures with a 29% strike rate and a level stakes net win of around £63.50, with Dr Richard Newland (30% strike rate, £9 level stakes net win) next best in the trainers’ table.

Such trends have been thin on the ground for favourite backers over this same period. A level stakes loss would have been recorded in all events featuring hurdles or fences, with only the National Hunt Flat races (49% strike rate, around £3.5o level stakes net win) showing a (meagre) gain.

Initially operating exclusively as a flat course, jumps racing was added to the programme in 1755, with the track operating as a dual purpose venue until as recently as 1966. A National Hunt-only track ever since, the next big shift came in 1995 when the course management made the decision to focus on summer racing – largely due to the frequent flooding of the track during the winter months. Just how wet does it get at Worcester? Well, in 2012 a canoeist was photographed happily paddling past the winning post!

Beginning in May and ending in October, the course stages around 20 fixtures per season, with its proximity to a number of West Country training centres helping to achieve a higher-than-average field size. There are no truly top-class events at this track, with a couple of handicap contests providing the highlights of the season. The Richard Davis Memorial Novices’ Handicap Chase remembers the jockey who sadly lost his life due to a fall at Southwell in 1996, whilst the Valerie Lewis Memorial Handicap Chase honours the owner of the great Gold Cup winner, Best Mate.