The most valuable race of the Good Friday All-Weather Championships Finals Day at Newcastle (Lingfield prior to 2022) is this Middle Distance contest, the Easter Classic, run over one and quarter miles.

As the most prestigious race of the day, the Middle Distance Championships attracts a quality field with the top flat trainers and jockeys taking part. Winning combinations since the inaugural running in 2014 include Mark Johnston and Joe Fanning, Charlie Appleby and William Buick and Sir Michael Stoute with Ryan Moore.

About the All-Weather Middle Distance Championships 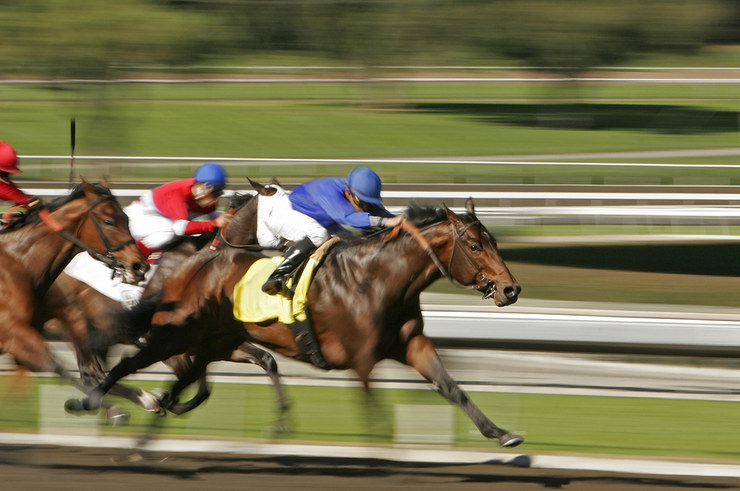 The Middle Distance Championship race is the culmination of many months of hard work by horses, trainers and jockeys alike. The race is the final step towards claiming first place, and the majority of the £200,000 purse on offer, the biggest prize-pot available at the Newcastle event.

The race is held alongside six other contests, five of which are similar in that horses in each have all had to go through the same journey to achieve a place in the starting line-up. That journey begins in October and runs all the way into March. In order for each horse to be considered for a place here on Finals Day, they need to race at least three times during this all-weather qualifying period, and maintain a high enough rating to qualify.

There is an alternative route to this final race though and a bite at the lucrative cherry. There are four races run during the all-weather season which grant the winner an automatic place at the starting line, guaranteed and with no-strings attached.

As you can imagine this route to the Middle Distance Championship has quite the pull, and attracts the biggest trainers around. As such, the Fast Track Qualifier races themselves have proven to be extremely popular within the racing community but however a horse makes it Finals Day, it is this one race that really matters.

The Best In The Middle

This highly competitive 2000 metre (10 furlong) race attracts any horses who are three years old and above, and who fancy themselves anywhere from 10-12 furlongs (the distance of the qualifying races varies).

That means that this contest is usually the one with the most competitors over the course of the all-weather season due to its broad spectrum of qualifying criteria. For this reason the purse is higher than any other race held on the day. It is also the reason the best trainers in the world are attracted to the event, as can be seen from the list of winners.

One of the most notable previous winners was Trystar in 2015, as along with winning horse of the year, his trainer Charlie Appleby also won the All-Star Trainer award at the finals. This was due to his 76 wins that year during the all-weather season, a truly remarkable feat. Another hugely successful winning combination was Matterhorn who won in 2019. This Irish horse was trained by Mark Johnson, who picked up the same accolade of All-Star Trainer in both the years 2014 and 2017.

There are many things to look in such a highly competitive race, but having looked at various stats we believe the ratings of the horses going into the final day competition may be most telling. After all, it is maintaining a high rating that has gained most of the horses access to this run.

From the chart below you can see that only two winners have delivered the goods with a rating of under 110. The first Finals Day was only in 2014, so clearly we don’t have masses of data to go at but even so, looking towards the head of the official ratings certainly looks the way to go. 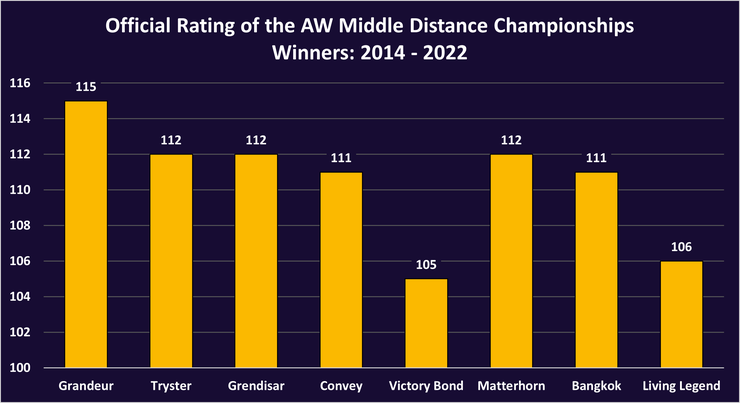 Victory Bond and Living Legend had ratings of 105 and 106 respectively, whereas all other winners (ahead of the 2023 race) had a minimum rating of 111. Moreover, it should be noted that over 60% of the horses who have won have had a rating of either 111 or 112.