The big juvenile hurdle at the Cheltenham Festival is the Triumph Hurdle on Gold Cup day. Aintree has it’s very own top class contest for young hurdlers in the form of the Anniversary 4-Y-O Juvenile Hurdle on the opening day of the Grand National meeting.

The first running took place in 1960 when the race was known as the Lancashire Hurdle, and was given Grade 1 status in 2005. As a result, many horses competing for the Triumph in the previous month will do so again here, with numerous winners of both races. These include Defi Du Seuil in 2017 and Pentland Hills in 2019.

About the Anniversary 4-Y-O Juvenile Hurdle 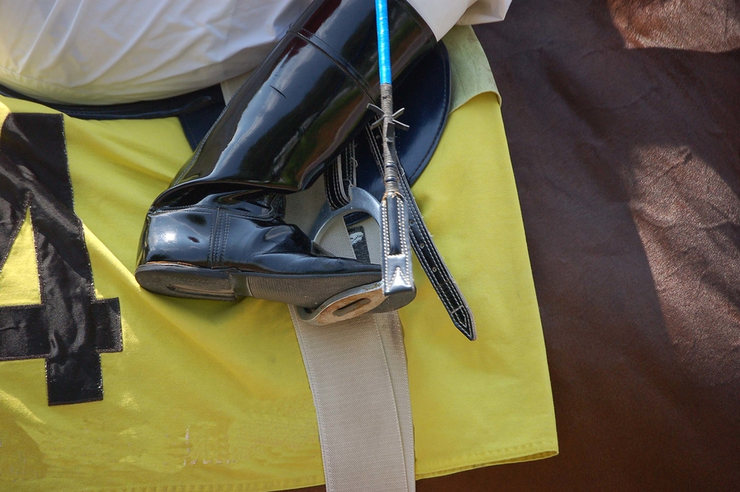 The three-day racing festival held at Aintree each year in April is of course best known for the contest which has made the name of the Merseyside venue so recognisable around the world. There’s plenty more on offer over the course of the spring Grand National Festival though, aside from the iconic steeplechase that gives the meeting its name. Among the highlights we have no fewer than 11 top level Grade 1 contests.

One such attraction on the opening Thursday of the meeting is this Grade 1 Juvenile Hurdle contest held over a trip of 2m1f. Open only to four year olds, the race has been with us in one form another since back in 1960, when it came into being as the Lancashire Hurdle. Initially a Grade 2 affair, the steadily increasing quality of the field over the years saw the race finally attain its current Grade 1 status ahead of the 2005 renewal.

This is one for the younger horses and being a four year old-only event, held over a trip of around two miles, it isn’t too surprising that the race tends to attract those runners to have taken part in the Triumph Hurdle at the Cheltenham Festival around a month earlier. A number of talented performers have backed up a Triumph success with a win in this race over the years, including most recently Detroit City (2006), Zarkandar (2011) and Pentland Hills (2019)

Moving On to Big Things

It can be relatively common for hurdlers to burn brightly during their four year old campaign, only to fade slightly during the seasons that follow and that has certainly been the case with a number of the previous winners of this race. Not all of them though… 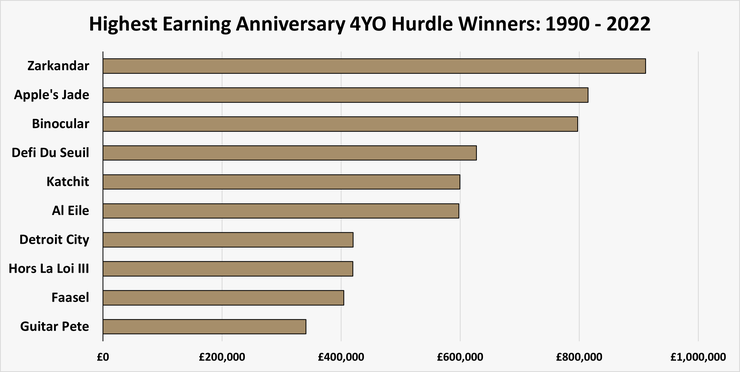 Amongst those to hit the heights are Al Eile (2004) who confirmed his liking for Aintree with three wins in the Aintree Hurdle; The Spaniard (1970) who conquered all in the Scottish Grand National; and best of all the trio of Hors La Loi III (1999), Katchit (2007) and Binocular (2009) who all went on to Champion Hurdle glory at the Cheltenham Festival.

We have some familiar names featuring in what is a close run thing to be the all-time top trainer in this event, with the four names in the above chart all still going strong. 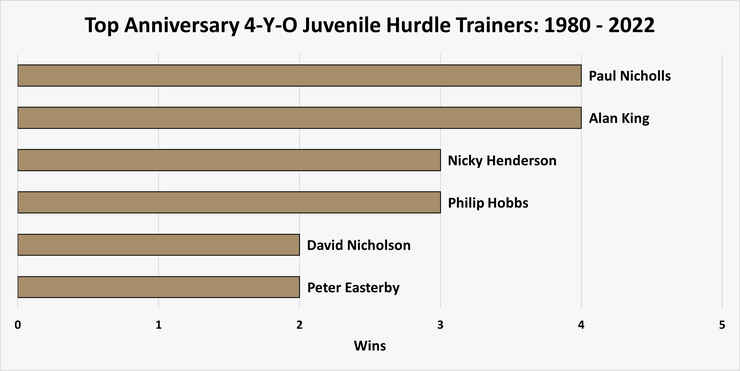 For many years Alan King had his nose in front in this race, with the back to back victories of Grumeti (2012) and L’Unique (2013) taking the Barbary Castle handler to a benchmark four wins in total.

Of course, it is no surprise to see the names of multiple champion trainers Nicky Henderson and Paul Nicholls in the mix at the top of the pile, with Henderson in particular being a man associated with success in this type of event. It was Nicholls however who has joined Alan King on four wins first thanks to victories with Le Duc (2003), Zarkandar (2011), All Yours (2015) and Monmiral (2021).

Alan King’s chief partner in crime in this contest has been jockey Robert Thornton, whose wins aboard Katchit (2007), Walkon (2009) and Grumeti (2012) put him in a tie for the lead amongst riders with Sir Anthony McCoy. Thornton seems likely to hold onto that record for a while yet but it seems highly likely that King will need more glory in the coming years if he is to get back in front of the training legends that surround him.