Whilst the major Group 1 contests both in Britain and in France will likely grab the headlines as October begins, for many racing fans there is simply nothing better than a big field handicap. The pick of the bunch on that score comes at Ascot with the latest renewal of the always competitive Challenge Cup.

The race takes place of the second day of Ascot’s Autumn Racing weekend, the penultimate flat meeting of the year at the Berkshire course, with Champions Day following later in the month. Many winners will go on to compete in the Balmoral Handicap, the final flat race of the year at Ascot.

This Class 2 heritage handicap contest which offers a total of £80,000 in prize money is to be run over a distance of seven furlongs. The ground at the track is currently described as good but, with heavy rain forecast, it is expected to ease significantly come the day of the race.

Open to all horses aged three years and older, the younger runners receive a two pound weight for age allowance in this race. Overall, the trends seem to be against the older performers, with nine of the past 10 winners being aged five years or younger – a stat which speaks against the four runners aged six and above in this year’s field.

As ever in a big field handicap such as this, the draw is likely to play a significant role in the result on the day. Recent evidence would suggest that middle to high may be the place to be, with eight of the previous 10 winners having been drawn in stall eight or higher.

The market leaders have an excellent recent record in this event, with a 40% strike rate across the past 10 years. That is particularly impressive considering the big field which invariably turns up for the event, and enough to hand favourite backers a level stakes profit of an impressive £13.75 over this period.

It’s tight at the top of the betting market this year, but the horse leading the way in most lists is the David Barron-trained defending champion Kynren. Extremely consistent in events such as this, and arriving on the back of a rock solid fifth place finish in the Ayr Gold Cup last time out, it is easy to see why he is proving popular with punters.

The son of Clodovil certainly seems to like it around here too, with his two previous efforts over course and distance resulting in a narrow second place finish in the Victoria Cup, and of course that win in this race 12 months ago. He is four pounds higher in the handicap this time around, but that is completely cancelled out by that fact that five pound claimer William Carver takes over in the saddle.

The rain in the area also counts as a big positive, as the gelding’s record over this trip on soft ground currently stands at a perfect two wins from two starts. On the downside, at six years of age, he is older than a typical recent winner of the race, whilst a draw in stall two is also a potential disadvantage. They can win from a low draw around here though, and with that form over course and distance and the likely conditions being big factors in his favour, he makes the shortlist.

We have two three year olds set to line up in 2020. George Margarson’s Ropey Guest boasts solid form in a higher grade than this and is well worth a look at a double figure price, but if a youngster is to prevail this year then it seems most likely to be the Clive Cox-trained River Nymph.

Following a fairly promising juvenile campaign, this son of Cable Bay began the current season on a mark of 84, and certainly didn’t look to be particularly well handicapped in his first two starts of the year. Beaten over six furlongs at Lingfield on his seasonal return, he was then nearer last than first over this trip at Newmarket on his next outing. Two starts later he is now up to a mark of 101 and amongst the most fancied runners in this competitive event.

Quite what has clicked for the colt in his two recent wins over this track and at Newbury remains something of a mystery, but it isn’t unusual for a lightly raced runner such as this to show a dramatic improvement in form. And on the evidence of that Newbury success, he may well have more to come. He is up fully 11 pounds for that latest win, but looked value for more than the two and a half length winning margin that day and can go well under Adam Kirby.

With the forecast being as it is – regular outbreaks of heavy rain between now and the off time – it isn’t too hard to imagine this becoming something of a slog at the distance, and a race likely to place a firm emphasis upon stamina. One runner likely to be brought firmly into calculations under such a scenario is the stepping down in trip, King Ottokar.

Highly regarded as a juvenile, this one lined up in the Group 1 Vertem Futurity Stakes on his final start at two years old, before then taking in a trio of Group class events last year. Ultimately, the son of Motivator didn’t quite prove up to that level, but he was by no means disgraced in the majority of those races, and looks interesting now back down in class.

His handicap debut over a mile last time out at Doncaster offered plenty of promise, as he was beaten by a margin of only four and three quarter lengths despite being denied a run at a crucial stage. We liked the way he hit the line strongly once in the clear that day, and having been dropped two pounds by the assessor ahead of this, he seems likely to be finishing to good effect and rates a threat to all.

About the Ascot Challenge Cup: Classy Handicap At Autumnal Ascot

Ascot is home to some of the most prestigious and high class races in the flat racing season. Flat racing fans know that there is much more to the season than just the big Group 1 contests with big field, highly competitive handicaps like the Ascot Challenge Cup a prime example.

The Challenge Cup has long been an important target for yards with hardy performers over seven furlongs. The increase in the prize fund over recent years has helped to further improve the quality of horses turning up to the feature race of Ascot’s Autumn Racing Weekend.

Hardiness as Important as Speed

There are a number of excellent handicaps taking place over seven furlongs during the flat season. It’s a trip that provides great entertainment as it allows for leading contenders from the big field to jostle for position before striking for home.

Seven furlongs also demands a combination of speed and stamina, with the latter attribute particularly important at Ascot. The straight course begins with a dip before a climb up a sharp hill. Many horses also fade in the final couple of furlongs and Ascot’s standard times for seven furlongs are relatively slow.

This has a few implications for the Ascot Challenge Cup. Punters should consider horses who have either proved they can cope with the specific challenges of Ascot before or who have run well at a longer trip than this one. 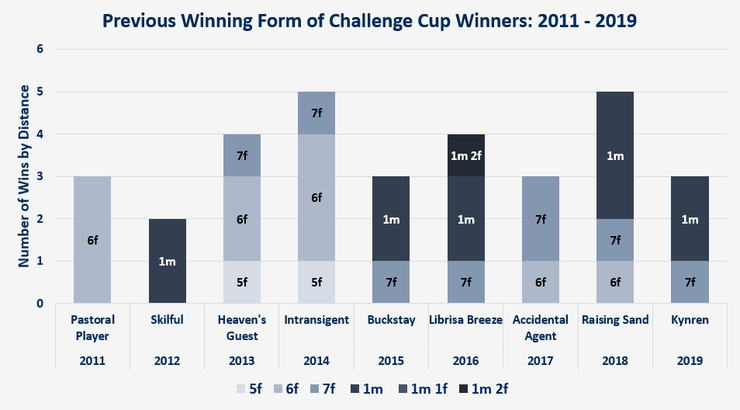 The ground in October further complicates matters. It is rare for the going to be good at Ascot at this time of year so the Challenge Cup is regularly run on ground that’s either good to soft or soft. This further increases the need for some proven stamina on behalf of the competitors.

A Tough Race to Predict

In many ways, the Ascot Challenge Cup is exactly what you would want from a handicap on the flat. The trip is very demanding, the prize money (which reached £180,000 in 2019) helps to attract a full complement of 18 runners and it is always a highly competitive race.

Although the class of winners has been trending upwards along with the increase in prize money, winning favourites remain far from the norm. Indeed, recent renewals have seen almost as many horses go in at double figure odds than right at the top of the betting. 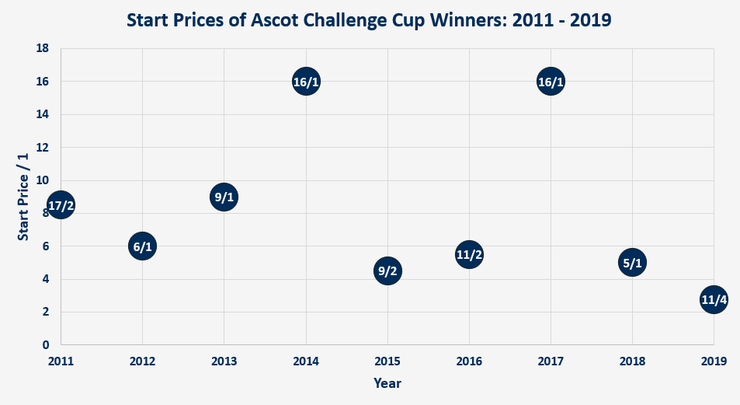 The difficulty of profiling a winner is not simply limited to the starting prices. Tough, experienced horses as old as six have won but we’ve seen three year olds land huge wins too. There is also a spread in terms of the weights carried even if those with 9st 11lb or less on their backs should be narrowly favoured. 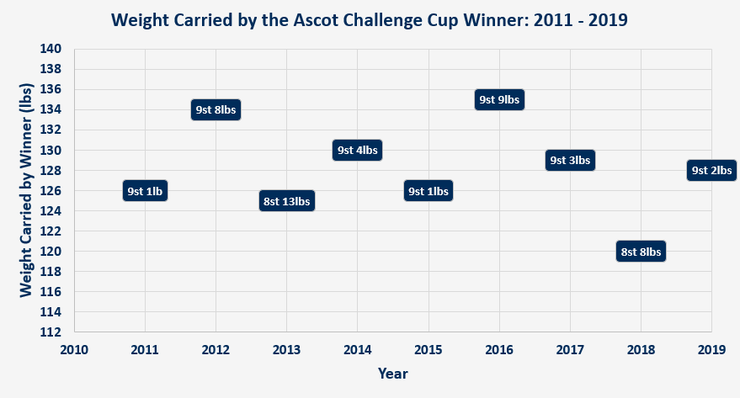 Finally, there is only the slightest draw bias with connections just about preferring their horses to be drawn in one of the central stalls.