Royal Ascot features many great races but arguably none come with the prestige of the historic Gold Cup. It is the race that launched the Royal Meeting and for stayers it is the most important event on the British flat racing calendar.

No race at Ascot has survived the test of time longer than the Gold Cup, which enjoyed its inaugural run in 1807. To this day the winning trainer is handed a gold trophy to keep. Some of the meeting’s most popular runners have come in this race including Stradivarius, Yeats and the Queen’s horse Estimate in recent years.

The two and a half mile Gold Cup starts on the track extension to the east of the course, at a similar mark to the 6f start. Runners pass in front of the stands before completing a full circuit.

About the Ascot Gold Cup 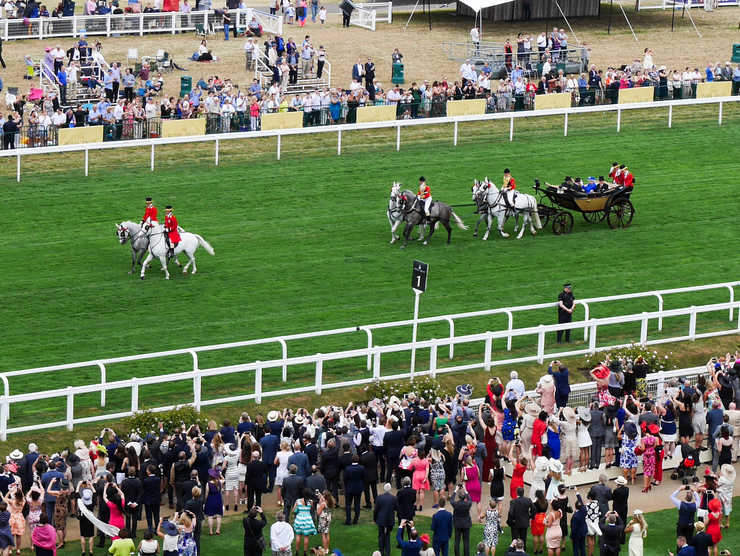 There simply isn’t a greater long distance flat race in Britain than Ascot’s Gold Cup. Winning the two-and-a-half mile test is the pinnacle achievement for any stayer and doing so will see them join a truly elite list of champions. Oozing such class, the Group 1 event is one of the star races of Royal Ascot, a contest that you cannot dare to miss.

Now over two centuries old, the Gold Cup has a fascinating past featuring plenty of royal involvement. King George III and Queen Charlotte attended the first ever running of the race in 1807 and 37 years later Nicholas I of Russia made an appearance during a state visit of England. The winner of that particular renewal had no name but was subsequently called ‘The Emperor’ in honour of the visiting monarch. As a show of gratitude, the successor of Alexander I donated a new trophy for the race and this triggered a brief name change to the ‘Emperor’s Plate’.

Worth Its Weight in Gold

Formerly the winning owners weren’t able to keep the trophy but these days the Gold Cup is one of three perpetual trophies handed out at Royal Ascot. Not only do owners get a fancy piece of silverware but they’ll also get their share of a gigantic prize fund. In 2022 the race was valued at £500,000 with over half of that going to connections of the winning horse. We think the trophy might just be a secondary concern! 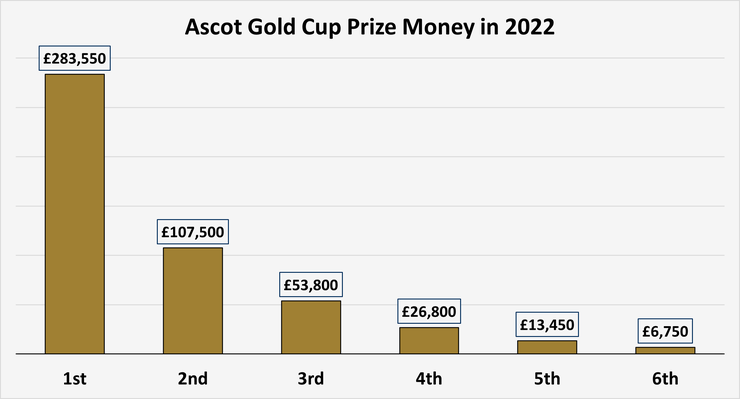 YEATS WITH A HISTORIC QUADRUPLE

The Gold Cup has been no stranger to double winners throughout its history. Only two horses have managed to claim more success than this though, the first being three-time champion Sagaro (1975-77) ridden by none other than Lester Piggott. For decades the chestnut horse stood as the all-time Gold Cup great but eventually an Irish thoroughbred by the name of Yeats would go on to outshine him.

The Aidan O’Brien-trained Yeats enjoyed plenty of success during a coveted career but it’s his four consecutive Gold Cup wins that he’s best remembered for. His first triumph came as a five-year-old in 2006. Although by no means a dark horse then, there were stronger options on the racecard than the Coronation Cup winner. After his initial success he spent the next three renewals as the favourite, justifying his short price each time. Thanks to Yeats’ dominance, O’Brien stands as the all-time leading trainer in the race with an unrivalled eight victories.

What makes Yeats’ accomplishment even more impressive is that he had to twice break the age trends to secure Gold Cup success. In 2007 he became just the second seven-year-old to finish first past the post in nearly 80 years. His victory the following season then broke an even longer record, stretching back a massive 108 years, as there hadn’t been another eight-year-old champion since Merman in 1900. This is not the all-time record however as the supreme mare Beeswing won as an nine-year-old way back in 1842.

The latest three-time winner was John Gosden’s Stradivarius, who completed his hattrick between 2018 and 2020. In 2021, he attempted to equal Yeats’ record of four victories but was unlucky in running and could only finish fourth after navigating his way out of a crowded pack. A similar race unfolded in 2022 with Stradivarius finishing third leaving Yeats’ record intact.

The Gold Cup serves as the first leg of the Stayers’ Triple Crown but as illustrious as the accomplishment sounds, few horses bother to attempt it. Completing the trio of races are the Goodwood Cup, followed by the less prestigious Doncaster Cup, which carries a purse around the fifth of the size. It’s this weaker final leg that helps explains the limited interest in the Triple Crown.

One horse that did successfully attempt to win the Stayer’s Triple was Stradivarius in 2019. The John Gosden trained star, ridden by Frankie Dettori on all three occasions, won his second Ascot Gold Cup and third Goodwood Cup before taking the Doncaster Cup as the 1/9 favourite. 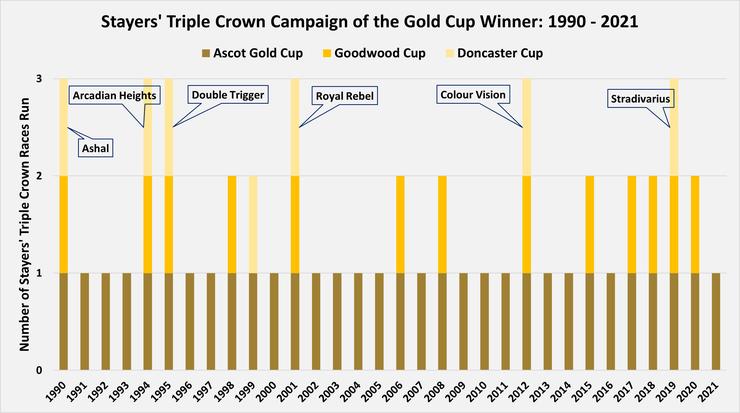 Gold Cup winners have been more involved at Goodwood but still not as much as you might expect. Striking gold in both races in the same season is not a regular occurrence as the table below shows, with Double Trigger, Yeats and Stradivarius the only horses able to do so in over 30 years.

First past the post in both the 1971 and 1972 Gold Cup was Rock Roi but quite incredibly his name does not feature in the history books. The luckless horse was first disqualified after traces of painkillers were found during a routine drugs test. The Jockey Club cleared trainer Peter Walwyn of any suspicion of corrupt practice but did still slap him with a £100 fine.

A year later the stewards took a dim view of his bumping match with runner-up Erimo Hawk and opted to reverse the final result. Jockey for both rides was Glaswegian Duncan Keith who retired from the saddle just weeks after the 1972 disappointment. 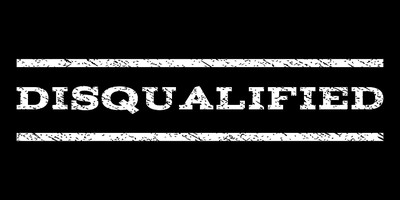 Following Rock Roi’s double disqualification, the Gold Cup enjoyed a few years lacking any sort of real controversy. This was until 1988 when the stewards snatched victory from Royal Gait’s hoofs. After several fine victories in France, the British-bred horse found himself as a credible 15/2 option for Gold Cup glory. During the race, pacemaker El Conquistador abruptly dropped back as they approach the home straight, colliding into Royal Gait by the rail. The collision threw jockey Tony Clark off the back of El Conquistador but the fourth favourite battled on to clock a record breaking time of 4:15:67.

Connections of the ‘winning’ horse began to celebrate the five length win but their mood quickly changed following a stewards’ inquiry. Somehow the racecourse stewards decided that Royal Gait was the horse at fault for hitting El Conquistador despite the pace-setter’s sharp deceleration. The five-year-old subsequently dropped down to last place with the decision branded one of racing’s greatest bungles by the Independent. Trainer John Fellows was similarly unimpressed, telling the press the outcome was difficult to believe.

You’ll struggle to find a top class race that Lester Piggott wasn’t able to win at least once. The 11-time British Champion jockey claimed 4493 wins over the course of his career with a sizeable chunk of these coming in Group 1 affairs. He remains the leading jockey for many of them but his record in the Gold Cup is one that looks utterly untouchable. Piggott recorded a sensational 11 victories in this long distance event, more wins than he managed in any other major race. The full list of his winners can be found below: