Getting day two of the Cheltenham Festival underway is the Grade 1 Ballymore Novices’ Hurdle also known as the Baring Bingham.

The non-sponsored name of the race honours the man who organised the first ever Festival back in 1902, though in recent years this one has been known as the Neptune, Royal Sun Alliance and Sun Alliance Novices’ Hurdle for previous sponsorship purposes.

About the Ballymore Novices’ Hurdle: A Path Taken by Hurdling Greats

The history of the Cheltenham Festival is littered with legendary horses, jockeys and trainers. None of it, however, would have been possible were it not for one man.

Baring Bingham was the owner of Prestbury Park around the turn of the 20th century and it was he who is credited with hosting the very first Cheltenham Festival in 1902. He may not be the most well-known man in the history of Cheltenham but the organisers have ensured that he will always be remembered by naming an important race after him.

The Baring Bingham Novices’ Hurdle is the number one race in the mind of many trainers for their leading up and coming hurdlers. Recent stars of the novice hurdling division such as Samcro, Faugheen and Simonsig have hammered home their dominance by winning this race although you’re unlikely to hear many people referring to the race by its official title when discussing those horses’ careers.

What’s In A Name?

The race is currently called the Ballymore Novices’ Hurdle after the property development company who sponsor it but it has been variously named after Sun Alliance and Neptune Investment Management over the years.

No matter what it’s called the Ballymore Novices’ Hurdle is always won by a top class display of hurdling. With a distance of two miles and five furlongs it is a race that demands a certain amount of stamina from the winner, especially as they climb the famous Cheltenham hill in the closing stages.

It’s also a demanding test of hurdling. It’s rare for one of the most fancied horses to fall in running but with such a high level of competition even the slightest jumping mistake at any of the 10 hurdles will be pounced upon and magnified.

As winning the Ballymore Novices’ Hurdle takes such a high class performance it is unsurprising that the winner has always shown a high level of hurdling before. The majority of winners had already won at least twice over hurdles and the importance of prior form means that shocks in the betting are very rare indeed.

Clearly, not all previous wins are equal and there are a handful of important races in the build-up that punters should concentrate on. Irish trained horses tend to compete in the Grade 1 Tattersalls Ireland Novice Hurdle at Leopardstown, the Navan Novice Hurdle and the ‘Monksfield’ Novice Hurdle which is also run at Navan. 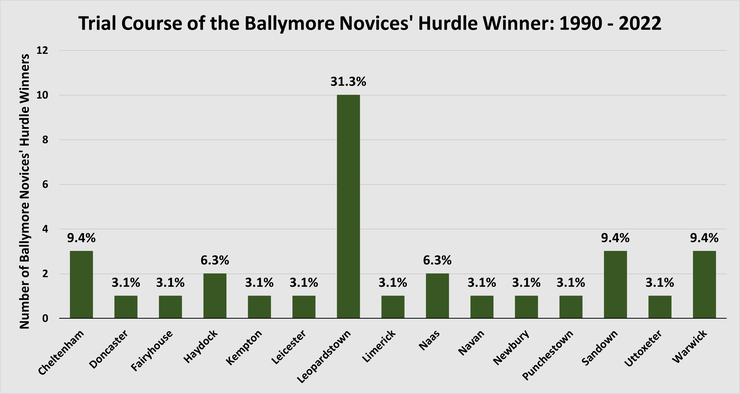 The Ballymore Novices’ Hurdle is usually one of the most exciting and competitive betting heats of the Cheltenham Festival. That’s because there are always a handful of classy young hurdlers in with a real shot. Moreover, it’s not a race which has been dominated by any one trainer although Irish trainers do have a good record with Willie Mullins leading the way.