Chase contests simply don’t get any better – certainly when judged on sheer excitement and spectacle – than those run over the big Grand National fences at Aintree.

As such we are in for a real treat at the end of November or the beginning of December as the likes of the The Chair, Valentines and Foinavon make their first appearance of the season in the Becher Chase, a race which never fails to capture the imagination.

Launched in 1992, this race is named in honour of Captain Martin Becher who, as a jockey, won the 1836 Grand Liverpool Chase, the race which would become the Grand National in 1839. Becher wasn’t so lucky in that first National, as we explain later, lending his name to Becher’s Brook, the 6th and 22nd second fence in the Grand National.

About the Becher Chase

Former soldier and jockey Martin Becher not only has an Aintree fence named in his honour but a Premier Handicap (previously known as Grade 3) chase too. During his riding career, Becher won the Grand Liverpool Steeplechase in 1836, the contest a precursor to the Grand National which began three years later.

This is not the reason why Becher is more than a footnote in Aintree history though. His fame stems from the fact that he fell at the first brook during the inaugural Grand National running before remounting his horse, soaking wet, only to fall again at the second brook. Not quite the glorious tale that often results in having a race named in one’s honour.

Becher’s Brook is the sixth fence on Aintree’s Grand National course and is one of 21 obstacles any contenders of this race must face before reaching the finishing line. The Becher Chase is not part of the Grand National meeting though and is run in late November or early December. Chasers aged six and older are put to the test over a distance just short of three mile and two furlongs. It’s a tough handicap to win but for the horse that can pull it off, they’ll pocket their connections the biggest slice of an attractive £150,000 purse (correct as of 2022).

Run over the same fences as the Grand National, the Becher Chase stands as a useful early-trial race for Aintree’s big event at the opposite end of the NH season. The distance of the two races aren’t comparable but often those that shine in this preparatory event do have the legs to go further, and of course, there are few races that extend to the massive distance of the National.

That said, there hasn’t been a Becher Chase champion, since its 1992 inception, who has gone on to win both races in the same season. Others have done well though, regularly finishing the race and sometimes landing a place, as you can see from the chart below that shows the Becher winners that also took part in the following April’s showpiece. 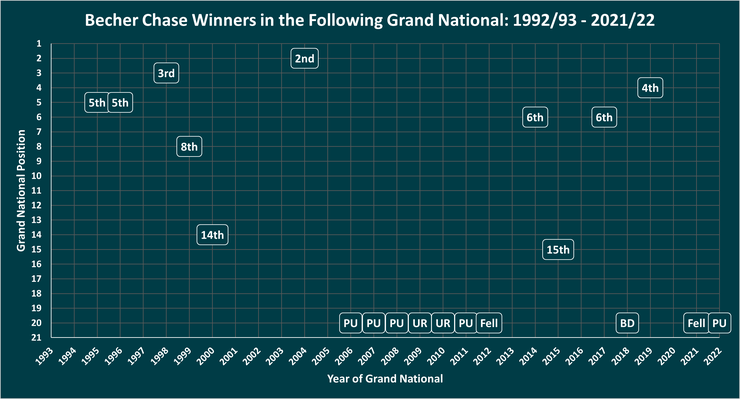 Although no Becher champion has followed it up with Grand National success five months later, three horses have won both races in their careers and are worthy of a mention. Earth Summit won Britain’s most loved handicap the season before claiming glory in this race. There’s also 2001 Becher Chase champion Amberleigh House, who claimed Grand National success three and a half years further down the line. Silver Birch was the last dual Becher Chase and Grand National winner, taking the Becher in 2004 and the National in 2007. Having performed so well in his first Scottish Grand National, perhaps Ashtown Lad might be the next to repeat the feat and is certainly worth keeping an eye on.

A Test Too Challenging for Many

There are two main questions you’ve got to ask yourself before putting your bets on for this race. Does your chosen horse have the legs to last the journey and do they have the necessary jumping ability to deal with the tough fences? If answering no to either, you’ll probably want to reconsider your options as a large proportion of horses don’t end up finishing this gruelling race. 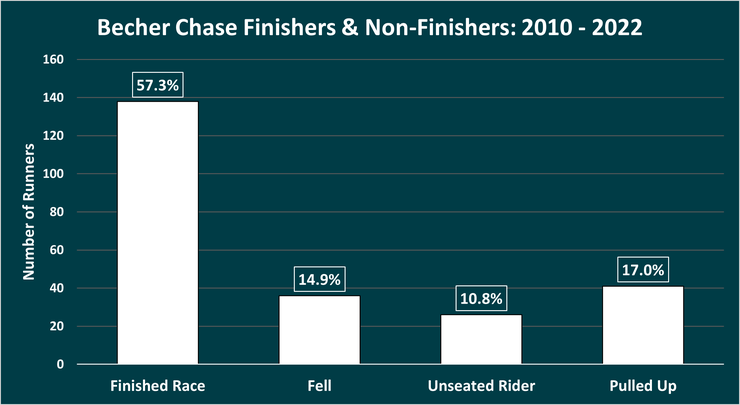 As the data above shows, a little under half of all horses that compete either fall, unseat their riders or are pulled up. The Becher Chase may be the “little brother” of the National but it is still a hugely challenging race.

Hello Bud never did quite reach the top tier of chasers but a perfectly handy career saw him amass £275k in prize money. His biggest triumph came in the 2009 edition of the Scottish Grand National but his name is also etched twice into the winners’ list of this race.

First winning as a 12-year-old, Nigel Twiston-Davies’ horse returned two years later having failed to win a single race in the meantime. Even at the ripe old age of 14 though, the veteran stayer still had one big effort in him as he won the 2012 Becher Chase by a neck in what was his last ever start. 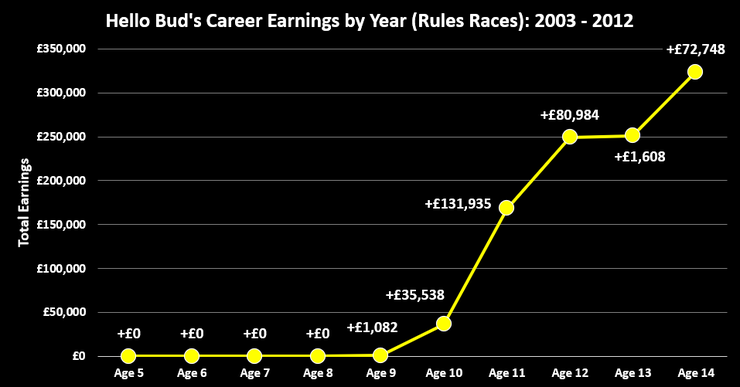 By doing so, Hello Bud became the oldest ever champion this race has seen and just the second to win it more than once.