The main handicap chase of Cheltenham’s November Meeting is Saturday’s Paddy Power Gold Cup, a race which runs the following day though is this classy Premier Handicap, the November Handicap Chase, currently known as the Jewson Handicap Chase.

At 3 miles and 3½ furlongs, this is almost a mile longer than the Gold Cup with winners going on to compete in a range of staying contests. West Approach, the 2019 winner, followed up with the Welsh National at Chepstow and Stayers’ Hurdle back at Cheltenham. The 2018 winner Rock The Kasbah went on to run in that season’s Grand National.

About the November Handicap Chase

Cheltenham Racecourse is home to some of the most valuable and prestigious races in the National Hunt season. Of course, most of them take place during the Cheltenham Festival but there are some excellent races held much earlier in the season during Cheltenham’s November Meeting.

The November Handicap Chase takes place on the Sunday of the November Meeting and is one of its feature races. It may be a handicap but this Premier Handicap (formerly a Grade 3) regularly features horses who go on to compete at the top level, with recent years even seeing horses return to Cheltenham in March to compete in the Gold Cup.

Stayers to the Fore

At three miles, three and a half furlongs, the November Handicap Chase is a true race for hardy stayers. As with any long distance race though, it’s not simply about stamina. Horses who jump well and do so reliably will conserve vital energy over the 22 fences which must be navigated in the race. That energy is absolutely crucial for any steeplechase at Cheltenham as the run up to the winning post climbs the famously demanding hill.

The requirement for horses to jump well and to dig deep in the closing stages has thrown up an interesting mixture of winners over the history of the November Handicap Chase. On the one hand, you have out and out stayers who are battle hardened in the most demanding handicaps. These horses tend to follow their November trip to Cheltenham with runs in races such as the Grand National races run at Aintree, Chepstow, Ayr and Uttoxeter.

Many of the main contenders in the November Handicap Chase will compete almost exclusively in handicaps for the remainder of their careers. Others will impress sufficiently and/or get to the point where their rating makes it impossible for them to remain competitive in handicaps that connections try them out amongst Grade 1 or 2 company. So far, the race is yet to produce a Cheltenham Gold Cup winner but it has produced several runners. It was also won by Royal Athlete in 1993 who subsequently won the Grand National in 1995.

It takes a certain amount of experience to win the November Handicap Chase. Horses without enough experience over fences and this sort of challenging handicap will find their challenge peter out. Therefore, it takes a very good performance from any horse to win this under the age of seven. Whilst winners aged over 10 are rare, older horses should not be immediately discounted. 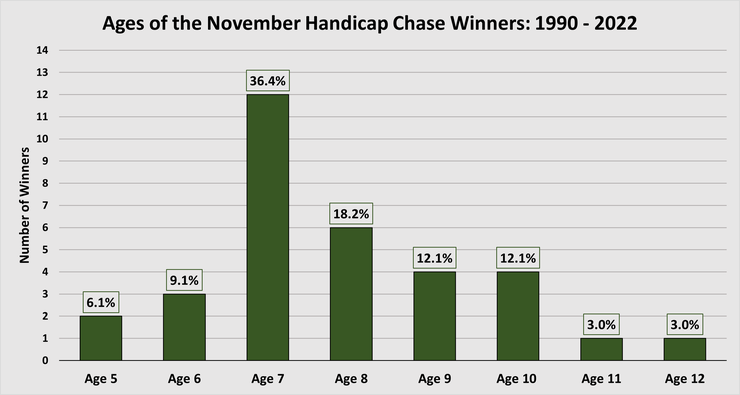 This is often the big betting race of the November Meeting at Cheltenham. Picking a winner is no easy task with several outsiders and very few favourites winning but those who get it right received handsome returns from the bookies. The competitiveness of this race means that runners at big odds often claim a place so it’s a race for which each way betting well suited.

It is always worth paying very close attention to the weights before having a bet on the November Handicap Chase. Punters need very good reasons to back any horse carrying 11 stone or more but, as we’ve seen, it is a contest that often involves some very high class types who can defy a penal rating.