Newmarket’s July Festival comes to a close on the Saturday but there is a climactic finale in store. One of the key events of the last day is the hugely competitive Bunbury Cup, named in honour of Sir Charles Bunbury, former Senior Steward of the Jockey Club. It was Bunbury’s Diomed that won the first Epsom Derby and his stewardship also led to the creation of the 1000 and 2000 Guineas.

Providing numerous double digit winners in the past, this handicap for three year olds and up is a popular contest among ambitious punters. The race is over seven furlongs along the July Course’s Bunbury Mile.

We have a trip of seven furlongs for this Class 2 handicap contest which offers total prize money of £60,000 this year. The going at the track is currently described as soft after the rain has been falling freely for a good few days.

Newmarket’s July Festival is of course the stage for a number of quality Group races, but it is equally generous in terms of quality handicapping action, with the pick of such events being this very contest, the Bunbury Cup. Always attracting a big field, the final act on the closing day invariably proves to be one of the most popular betting heats of the meeting.

With two previous wins in the race, it is Mark Johnston who is the most successful trainer amongst those represented this year. Indeed, should one of Blown By Wind, Cardsharp or Vale Of Kent come home in front, Johnston will move into a tie for the all-time lead in the race.

Unsurprisingly given its ultra-competitive nature, this hasn’t been the easiest of races for the market to get right in recent years, with just the two wining favourites, or joint favourites, in the past decade. Supporters of the market leader would still only have recorded a small level stakes loss of £1 over this period though.

Richard Hannon Jnr has plundered a number of big race handicaps during his career, but is yet to land this particular prize. However, the market would suggest he has an excellent chance of breaking his duck in 2020, as it is his four year old, Motakhayyel, who currently heads the betting.

This lightly raced son of Heeraat has proved to be a rock solid performer in only once finishing outside of the first two in five career starts, and boasts form figures of 121 over this specialists trip of seven – only going down by a neck in that sole defeat. The latest of those “1’s” also came in his most recent start, when posting a big career best to land the Buckingham Palace Handicap at Royal Ascot. Whilst he did most likely benefit from being drawn towards the near side that day, he still won pretty nicely in travelling well behind the pacesetter before asserting late on. He gets a seven pound rise for that, which makes life tougher, but he looks likely to run another big race under Jim Crowley.

Also prominent in the betting is another runner from that Buckingham Palace event at the Royal Meeting in the shape of Roger Varian’s Mutamaasik. In common with Motakhayyel, this one also goes in the famous Hamdan Al Maktoum silks, and is also relatively lightly raced for a four year old, with just the six previous runs under his belt.

The similarities with the Richard Hannon-trained favourite don’t stop there, as this son of the super sire Dubawi has also proved to be remarkably consistent, boasting career form figures of 211113. As impressive as his four wins have been, his best effort may actually have been that third placed finish last time out. Having ended up coming down the centre of the track he was always up against it that day, given the strong bias towards the near rail, but he did see off everything else in his group in good style, going down by just two and a quarter lengths at the line. Getting a five pound pull in the weights with the winner that day, there will be plenty who believe the mount of Ryan Moore may turn the tables.

Another who looks likely to go well is Arigato from the yard of local trainer William Jarvis. With 24 career starts to his name, this five year old son of Poet’s Voice is certainly more exposed than the two Hamdan al Maktoum runners, but looking back through those previous outings, it would appear that he has never been in such good form as he is now.

Heading into the race seeking a hat-trick, following back to back successes on the Rowley Mile, the switch to the July Course is no cause for concern considering he is yet to finish outside of the first two in three previous efforts at the track. A three time winner at the distance, and on going ranging from soft to good to firm, he can be relied upon to handle whatever conditions come up on the day. Having looked value for more than the one length winning margin last time out, he also doesn’t look to have been too harshly treated by the handicapper in being raised five pounds. Sneaking in towards the foot of the weights he has plenty in his favour under Josephine Gordon.

About the Bunbury Cup: High Quality Handicap At HQ

There are many flat racing festivals to light up the summer months for fans of horse racing, and the headquarters of the flat game certainly takes its turn in staging the action. Newmarket’s three-day July meeting is invariably one of the most anticipated meetings of the season, and features a nice mix of top class Group races, and competitive handicapping fare.

One of the highlights on the handicapping front is this 7f contest which traditionally takes place on the third and final day. First run in 1962, the race is named in honour of former steward of the Jockey Club, Sir Charles Bunbury. Bunbury made many contributions to the sport during his career, one of the most lasting of which being the introduction of Newmarket’s two Classic contests of the 1000 and 2000 Guineas.

Make Mine A Treble

Considering just how competitive these big field handicap contests are, it is an impressive enough achievement to win such an event on one occasion. To do so twice is really worthy of note, but to register three separate successes is a truly special achievement. Mummy’s Pleasure (1983 and 1984) and En Attendant (1993 and 1994) were the first two runners to do the double in this race, but in the early 21st century a runner from the yard of James Bethell went one better.

That horse went by the name of Mine. Initially dead heating here in 2002, he was then awarded the race in his own right due to rival Capricho having carried the wrong weight. Runner up in 2003, 2004 was a barren year, but Mine returned to land back to back renewals in 2005 and 2006. That last success made Mine not only the only three-time winner of the race, but also, at eight years of age, the oldest winner in the history of the contest.

Those three wins for Mine were also enough to make James Bethell the joint most successful trainer in the event (as of 2019); an honour Bethell shares with Michael Jarvis and Richard Fahey.

Lester Out On His Own 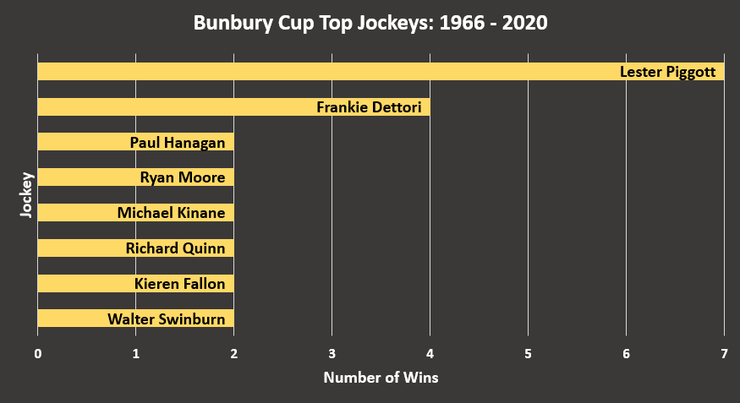 There are some big names amongst the list of most successful jockeys in this race – with the above riders having had no shortage of Champion Jockey titles between them. Way out on his own at the top of the pile though is the man who for many is the greatest rider in the history of the sport.

First successful in 1966 with Showoff, Lester Piggott’s final win aboard En Attendant in 1996 was his seventh in all, with those victories coming for six different trainers.

As mentioned, Mine became the first and so far (as of 2020) only eight year old to come home in front here. It is in fact relatively unusual for any runner aged older than five to land the prize. As we can see from the above chart, it is the four year old runners who have much the best record, having landed just a shade under half of the 51 renewals between 1970 and 2020.