Newmarket’s July Festival comes to a close on the Saturday but there is a climactic finale in store. One of the key events of the last day is the hugely competitive Bunbury Cup, named in honour of Sir Charles Bunbury, former Senior Steward of the Jockey Club. It was Bunbury’s Diomed that won the first Epsom Derby and his stewardship also led to the creation of the 1000 and 2000 Guineas.

Providing numerous double digit winners in the past, this handicap for three year olds and up is a popular contest among ambitious punters. The race is over seven furlongs along the July Course’s Bunbury Mile.

About the Bunbury Cup: High Quality Handicap At HQ

There are many flat racing festivals to light up the summer months for fans of horse racing, and the headquarters of the flat game certainly takes its turn in staging the action. Newmarket’s three-day July meeting is invariably one of the most anticipated meetings of the season, and features a nice mix of top class Group races, and competitive handicapping fare.

One of the highlights on the handicapping front is this 7f contest which traditionally takes place on the third and final day. First run in 1962, the race is named in honour of former steward of the Jockey Club, Sir Charles Bunbury. Bunbury made many contributions to the sport during his career, one of the most lasting of which being the introduction of Newmarket’s two Classic contests of the 1000 and 2000 Guineas.

Make Mine A Treble

Considering just how competitive these big field handicap contests are, it is an impressive enough achievement to win such an event on one occasion. To do so twice is really worthy of note, but to register three separate successes is a truly special achievement. Mummy’s Pleasure (1983 and 1984) and En Attendant (1993 and 1994) were the first two runners to do the double in this race, but in the early 21st century a runner from the yard of James Bethell went one better.

That horse went by the name of Mine. Initially dead heating here in 2002, he was then awarded the race in his own right due to rival Capricho having carried the wrong weight. Runner up in 2003, 2004 was a barren year, but Mine returned to land back to back renewals in 2005 and 2006. That last success made Mine not only the only three-time winner of the race, but also, at eight years of age, the joint oldest winner in the history of the contest along with Bless Him (2022).

Richard Hannon’s Motakhayyel was the latest two-time winner of the race, could he join Mine the future?

Those three wins for Mine were also enough to make James Bethell the joint most successful trainer in the event (as of 2022); an honour Bethell shares with Michael Jarvis and Richard Fahey.

Lester Out On His Own

There are some big names amongst the list of most successful jockeys in this race – with the above riders having had no shortage of Champion Jockey titles between them. Way out on his own at the top of the pile though is the man who for many is the greatest rider in the history of the sport.

First successful in 1966 with Showoff, Lester Piggott’s final win aboard En Attendant in 1996 was his seventh in all, with those victories coming for six different trainers. 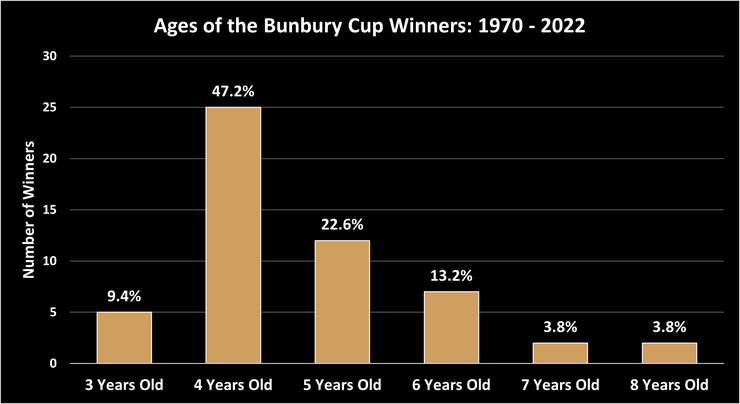 As mentioned, Mine became the first eight year old to come home in front here. Bless Him became only the second horse aged eight to win the race in 2022. It is in fact relatively unusual for any runner aged older than five to land the prize. As we can see from the above chart, it is the four year old runners who have much the best record, having landed just a shade under half of the 53 renewals between 1970 and 2022.