Goodwood sees the summer out in style as they hold their three day August Bank Holiday fixture which runs from Friday to Sunday. The highlight on the Saturday is the Group 2 Celebration Mile which is the most valuable race of the meeting.

The first Celebration Mile was run in 1967, and the race was awarded Group 3 status in 1971 when the ratings system was brought in, rising to Group 2 in 1977. Winning the 1971 renewal was none other than Brigadier Gerard who was arguably the greatest flat horse of the 20th century, winning this by 10 lengths in the same season as he won the 2000 Guineas, St James’s Palace Stakes, Sussex Stakes, Queen Elizabeth II Stakes and the Champions Stakes.

The Celebration Mile begins towards the north of the track at the far side of the course. Runners travel in a straight line towards the south of the course, moving slightly left-handed before a sharp right-hand turn to join the home straight.

About the Celebration Mile: A Fine Mile Contest from Goodwood

The Celebration Mile is a flat horse race which is run at Goodwood racecourse each year towards the end of August. The contest is for horses aged three years and older. The race is run on a turf surface around a right-handed track. The prestigious event was first run in 1967 under the title of the Wells Mile, and was won by three year old St Chad. In 1971 the race was upgraded to a Group 3 race and renamed the Goodwood Mile.

From 1975 the race was once again renamed the Waterford Crystal Mile, then upgraded once again to Group 2 status in 1977. Then 1989 was the year the race was given the title it operates under today. The race holds similarities to the Queen Elizabeth II Stakes which is run at Ascot in October as part of British Champions Day. The last horse to claim victory in both affairs was Poet’s Voice in 2010.

Controversy Over The Years

The high profile race has seen its fair share of mishaps over the last few decades. In 1985 the entire event had to be abandoned due to a waterlogged course. Cape Cross was the horse who finished first in the 1997 contest but after a stewards’ enquiry his winning status was revoked. Not only that, but instead of being awarded second place, which is commonplace in such scenarios, he was placed dead last due to the infringement. Last but not least is the case of Delegator who passed the post first in 2009 only to be disqualified due to testing positive for a banned substance.

Stoute Out In Front

Despite all the lows there have certainly been many more highs at the event over the years. The record holders list begins with none other than Sir Michael Stoute, who has saddled no fewer than eight winning runners over the years, ranging from 1987 with Milligram to 2009 when Zacinto claimed the spoils. 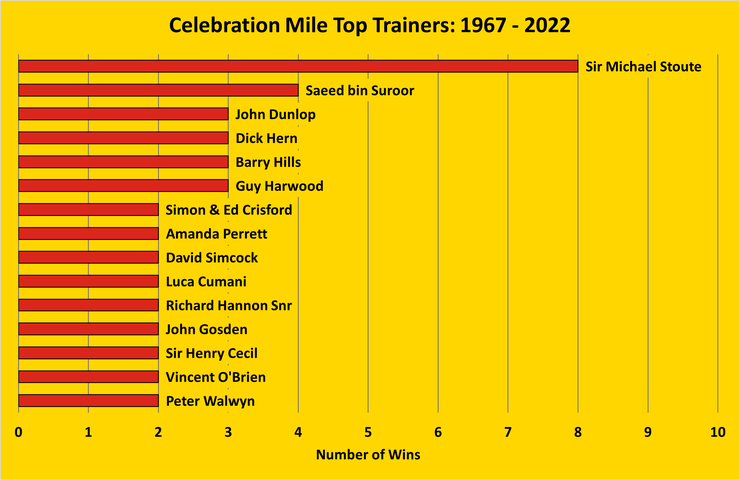 There are three in total who lead the way for the jockeys. Joe Mercer, Willie Carson and Greville Starkey have four wins apiece in this event over the years. As for the equestrian successes there are two horses who have struck on more than one occasion, Chic in 2004 and 2005, and Lightening Spear in 2016 and 2017 who both hold that record.

When analysing the records of previous winners there is one glaring piece of information that cannot be overlooked.  Thirteen out of the last fifteen races up to 2022 were won by horses in the top three of the betting. As you can see from the chart below, eleven out of those fourteen were either the favourite or second favourite. Only the 2012 winner Premio Loco and 2021 winner Lavender’s Blue bucked that trend when both winning off a 20/1 starting price. This is data which is hard to ignore so be sure to scrutinise any possible selections outside of this criteria as the market appears to know better in this particular race. 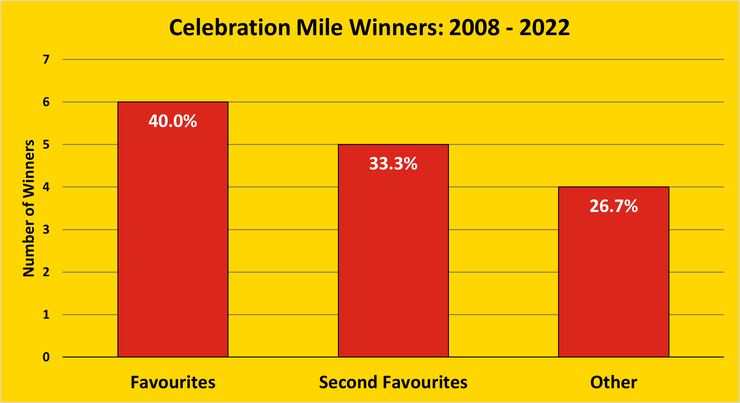