On the day labelled “Future Champions Day”, there is unsurprisingly an overload of top juvenile action for those with Classic aspirations headed into next season, but it’s not all about the Group class performers with real variety on offer from Newmarket. Also on the card is one of the premier handicap contests of the season, as the stayers go to post in this somewhat unusual event, the Cesarewitch Stakes.

Inaugurated in 1839, this race is run over a distance of two miles and a quarter miles. This trip opens the race to National Hunt trainers and horses with Willie Mullins, Alan King, Philip Hobbs and Nicky Henderson all victorious in recent years.

This Class 2 Heritage Handicap contest offers £200,000 in total prize money, and sees a field of runners aged three years and older do battle over the marathon trip of 2m2f. The ground at the track is currently described as soft.

Mark Johnston leads the way amongst the trainers on show this year, with the Middleham handler having registered three previous wins in the race. Johnston sends Mondain and Summer Moon into battle this time around, and should either prove successful, he will move level with William Day and Mathew Dawson for the all-time lead amongst the trainers.

Those drawn middle to high have held sway here in recent editions, with each of the past five winners having emerged from a double figure stall. Another trend worth noting is the fact that eight of the past 10 winners have been saddled with 9st2lb or less on the day.

This has been a mightily tough race to call in recent years, with the past decade alone seeing winners return SP’s of 25/1 twice, 50/1 and 66/1 twice. Only one market leader has prevailed over this period, handing favourite backers a level stakes loss of £4.00

This may be a flat contest, but with a big pot to play for, and the emphasis being firmly placed upon stamina, it is no real surprise that the race regularly attracts the attention of the top National Hunt trainers from both sides of the Irish Sea. It is in fact multiple Irish Champion jumps trainer Willie Mullins who has saddled the winner in each of the past two seasons. And this year the Closutton maestro relies upon the six year old, Great White Shark.

A typically successful dual purpose performer for the yard, this son of Le Havre has won three times over hurdles and three times on the level. And with the latest of those hurdling successes coming over 2m7f, he can be more trusted than most to see out this trip. Last sighted on the flat when failing to defend his crown in the Connacht Hotel Handicap at the Galway Festival, he still ran with great credit that day to go down by only two and a quarter lengths at the line, despite having to come wide around the whole field in order to mount his challenge. He’s two pounds lower here than he was for that, and with the winner, Princess Zoe, having since gone on to score in the Group 1 Prix Du Cadran at Longchamp, the form looks particularly solid.

Leading the charge for the home team is the Andrew Balding runner, Coltrane. Nicely bred, being by Mastercraftsman and out of a Montjeu mare, this three year old colt will be making just the sixth start of his career here and as such, would be open to considerably more improvement than the vast majority of his rivals.

Running green as grass on his debut at Kempton, he was then disappointing when managing only fourth place – despite being a well backed favourite – in his second start at that same venue. It does perhaps seem that the artificial surface simply wasn’t to his liking though, as he has looked a completely different horse since being switched to turf.

Three starts on grass have yielded three wins, and three pretty easy wins at that. The most recent of those successes coming when being stepped up to 1m6f for the first time in the Melrose Handicap at York. The handicapper has taken a pretty dim view of that win in hiking him up 11 pounds ahead of this assignment, but the manner in which he was pulling clear at the line suggests there may be more to come over the additional four furlongs of this event.

As the recent results have shown, it can often pay to look beyond the most obvious contenders in this tricky event. One horse who we wouldn’t be at all surprised to see go well at a very big price is the Gay Kelleway-trained Mukha Magic.

This one admittedly isn’t the most consistent of performers – hence the price – but does look the type to be well suited by the challenge of this race. The four year old will actually be having only his second start at a trip of further than 2m, and if judged on his previous attempt he would appear to boast sound each way claims. That effort came when staying on nicely up the rail in the 2m5½f Queen Alexandra Stakes at the Royal meeting, and whilst he is down three and a half furlongs in trip here, the likely testing ground should help to bring his stamina into play. He also looks very interesting from a handicapping perspective on that Ascot outing.

Having been dropped a pound by the assessor since that effort, and with seven-pound claimer Callum Hutchinson taking over in the saddle, he is effectively eight pounds lower than for a two and a half length defeat to the talented Who Dares Wins. He did run at Southwell earlier in the week, but has won twice on the back of very quick turnarounds in the past and could just outrun those huge odds.

About the Cesarewitch Stakes: The Marathon Autumn Handicap 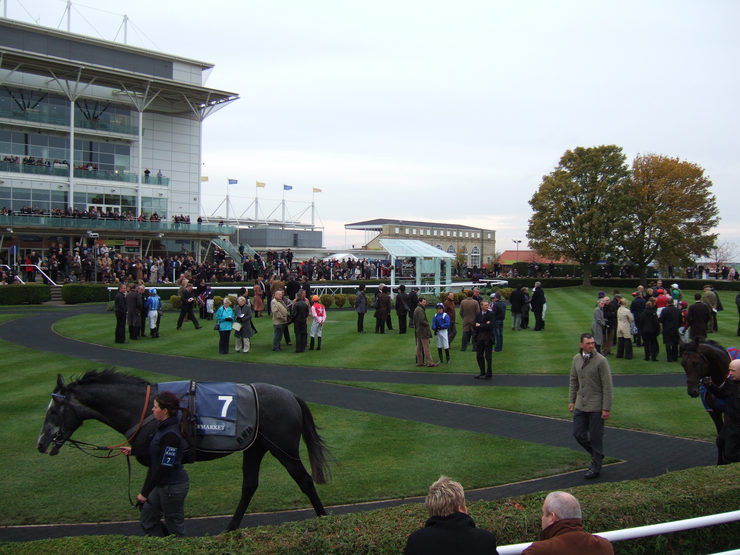 In October, two weeks after the popular Cambridge Handicap, Newmarket hosts the second half of the ‘Autumn Double’, the Cesarewitch Handicap. While both are massive races in their own right, the standing of the Cesarewitch enjoyed a massive boost following the recent Dubai sponsorship deal. The partnership more than doubled the jackpot for the handicap, bumping it up to a huge £500,000 in 2018 though this dropped to £350,000 in 2019 and will be £200,000 in 2020. Still one of the richest flat handicaps in the UK, demand remains high for this popular two mile, two furlong battle which can feature as many as 34 runners.

The rather unusually named race gets its title from the anglicised word for Tsesarevich, the title given in Imperial Russia to the next heir of the throne. But what does Russian royalty have to do with British horse racing? Well, Tsesarevich Alexander (later Tsar Alexander II) had a soft spot for the sport it seems as he donated £300 to the Jockey Club, not a trivial sum in those days. Not too far from two centuries later, the race continues to operate under his name and what a fine race it is to be attached to.

When looking at the age of former Cesarewitch winners, there’s one record that jumps out from the rest. While the bulk of champions have been aged between four and seven, Caracciola completely bucked the trend by winning as an 11-year-old. His fine effort in 2008 saw him become the oldest ever champion of a race that dates back to 1839. The German-bred horse’s historic achievement was one that few saw coming but there was absolutely no luck involved during a commanding three length triumph. 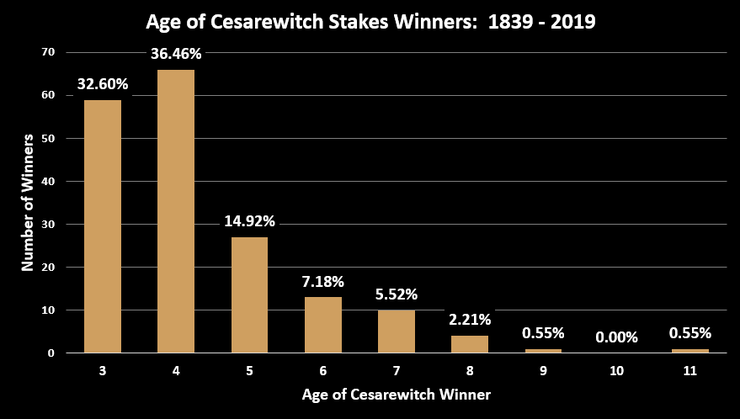 Having finished second in the Cesarewitch a year earlier, perhaps the market ought to have had more faith in Caracciola but a combination of his age and lack of form proved sufficiently off-putting. With no support, the Nicky Henderson-trained (that also ought to have alerted punters) horse set off at a huge 50/1 price tag but he’s far from the only long-odds winner this race has seen in recent years.

Grumeti won at the same price in 2015 and there were two 66/1 champions just a few years earlier, in 2012 and 2013. It’s little surprise then why this race is such a huge hit with the punters who are frequently well compensated for picking out the winner. It isn’t an easy task of course, but choose your bets wisely and even an each way punt can lead to a huge profit. 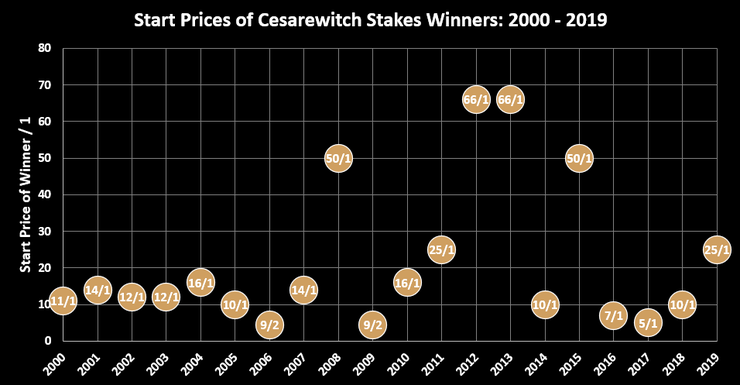 DON’T BE LEFT OUTSIDE

As you can see above, there’s rarely such a thing as a short-priced Cesarewitch winner. Even backing a placed horse can reap handsome returns, especially given the range of promotions the bookies usually offer for the contest. Picking a horse that makes the frame isn’t easy but a little assistance from the race trends can go a long way. One thing past results tells us is that those drawn close to the rail fare best while those on the very outside regularly struggle. 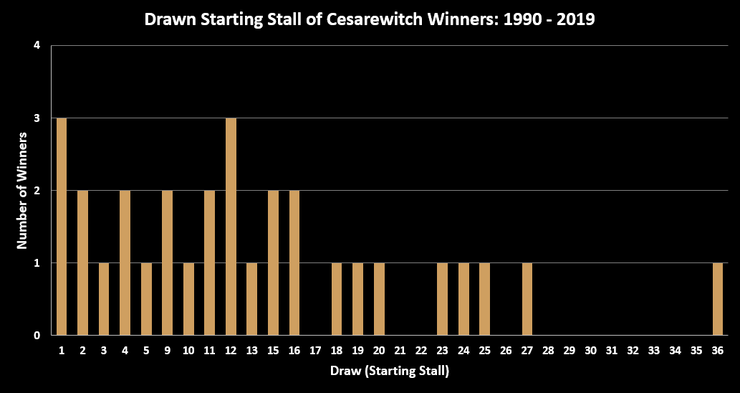 Looking at the data above, it does rather make sense when you think that this race takes place on an L shaped course. Those starting on the inside are well placed to take on the right handed turn whereas those beginning in a wide berth have a lot of traffic to cut across in order to get a more preferential line.

In 2012, Aaim To Prosper delivered the seemingly impossible by winning the Cesarewitch Handicap for a second time. Never before had a horse been able to pull this off despite so many efforts over the years. The record-busting horse finished a credible seventh on his Cesarewitch debut and won as the favourite the following year when edging out La Vecchia Scuola.

Unable to defend his crown in 2011 as his season was cut short, Aaim To Propser returned to Newmarket 12 months later, trading as a whopping 66/1 outsider for a historic second title. Despite his huge price, the eight-year-old stayed on gamely for Kieren Fallon as he held off the 7/1 favourite Countrywide Flame to earn his place in the history books.