We have something a little different for the Day 2 finale with not a hurdle or fence in sight in the concluding bumper. The Champion Bumper is a National Hunt flat race which was first run in 1992, and is the final race run at The Festival run over the Old Course. Winners of this that have gone on to have stellar careers over obstacles include Cue Card and Florida Pearl.

The last race on the second day is always a fascinating affair and is well worth sticking around for. Two miles and half a furlong is the trip for this Grade 1 National Hunt flat race, set to be run on soft ground this year and offering £75,000 in total prize money. We’ve seen one or two past winners go on to really big things and might we have a star in the making this time around?

As is the case with many of Cheltenham’s top contests, no trainer has enjoyed more success in this race than nine-time champion Willie Mullins and the Irishman will be looking to work his magic yet again.

Ferny Hollow isn’t the strongest of Willie Mullins' two entries according to the odds but bear in mind double-digit-priced winners have won six of the last 10 renewal of this race. The betting hasn’t been the most trusty guide for this one so it’s important to identify value when you see it, something a bet on Ferny Hollows has in abundance.

There’s plenty we like about the five-year-old but ultimately it’s his showing last month at Fairyhouse which helped cement his place as our top tip. He lost a very similar race nearly three months prior by two lengths but on this occasion an improved Ferny Hollow breezed past the field despite the testing conditions. Clearly a horse happy to run in the mud, all the recent rainfall at Cheltenham will only serve to aid his cause. The same can be said about the use of headgear which was partly responsible for his improved showing last time out and we think he can really outrun his odds here.

Staying within the Mullins camp, let’s take a look at Ferny Hollow’s stablemate Appreciate It. The clear market leader for this race approaches the prestigious bumper on the back of two commanding wins across the Irish Sea.

While well fancied to win both contests at Leopardstown, he did win them with more ease than some were expecting. It was the shorter test, which came over two miles, which was especially straightforward as the six-year-old had far too much closing stage pace for his competitors to handle.

Another strong finish will be needed to see off such a packed Champion Bumper field but how will the Irish-trained horse cope with all the extra traffic? He’s yet to compete in a double-digit field and his third-place showing at Fairyhouse in November suggests he’s better when able to seize a prominent position. Although he’s in very good hands with Patrick Mullins in the saddle, we wouldn’t fancy him to recover if he gets stuck too deep and odds of just 6/4 look more than a shade short to us.

Queen’s Brook is a name virtually none of us had heard of until she made her National Hunt debut last month. Previously a point-to-point runner, she demonstrated enough quality in those low key affairs to warrant a run out at Gowran Park in a NH Flat test. What a debut it was too as she stormed to a 21 length victory in gruelling conditions. To win by such a distance against 16 other runners with no flat racing experience is quite the feat and one that should not be quickly dismissed.

It would be wise to temper expectations at least a little though as the standard of the mares competing at Gowran Park was poor, certainly compared to what she will face here. That day they set off at a rather sluggish pace and and all rather eased off as Queens Brook pulled away late on, exaggerating the difference in quality. At 6/1 you could perhaps argue she’s still worth a go but we’re inclined to think the faster tempo of this race could catch a horse like her out.

If Panic Attack were to claim victory on Wednesday she would become only the third horse under the age of five to manage the feat in this contest. The age trends are firmly against David Pipe’s horse getting herself first to the line but of course, trends merely serve as a guide and do not have the final say. Perhaps more concerning is that Willie Mullins was willing to part with the filly after she comfortably won on her debut. New trainer David Pipe is certainly no stranger to acquiring talent but it’s not too often that Mullins gets things wrong.

Having yet to run for her new trainer, it’s hard to know what to expect from Panic Attack here. There was plenty of talent on display during her sole showing at Market Rasen but she still has some growing to do. Unless she’s filled out quite rapidly since, we doubt that she’ll be able to win a race of this calibre just yet but keep your eye on her over the coming months.

For those of you who can’t resist a hopeful each way punt in this well-attended race, Audacity is one name you will want to consider. Although easily beaten by Ocean Wind, a 12/1 option for this contest, last time out, when the pair met a month earlier it was Audacity who narrowly came out on top. It’s important to point out that when Warren Greatrex’s horse claimed victory they were racing at Cheltenham on ground similar to what we are going to have this Wednesday.

Much slicker ground definitely played its part in February’s dead last finish at Newbury and perhaps the slightly increased trip did too. Audacity had to run two furlongs longer that day and it was around two furlongs out where he began to lose hold of his prominent position. Another two mile attempt is, therefore, something of a concern but this is most definitely built into the long odds. His pedigree suggests he might never be a two mile horse but maybe Cheltenham will bring out the best in him once again, especially on ground that is likely to suit.

About the Champion Bumper: The Festival Flat Race 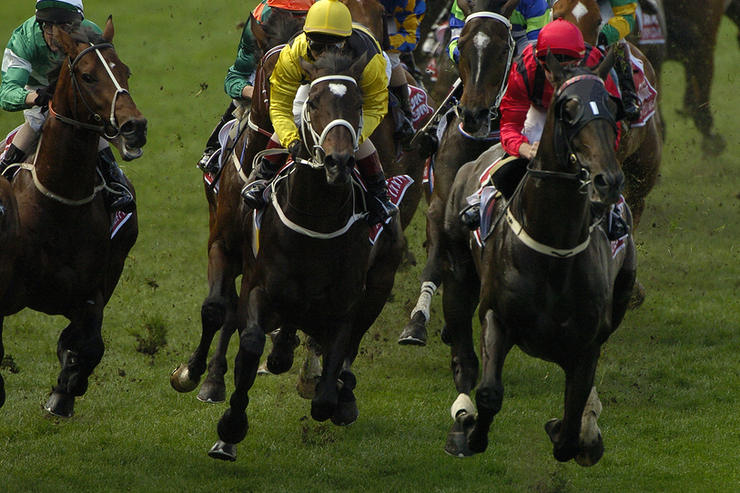 The Cheltenham Festival is often referred to as the number one jumps racing meeting in the world. That isn’t quite technically correct though. Cheltenham is a National Hunt meeting and National Hunt racing contains a number of different disciplines, not all of which involve jumping.

The Champion Bumper is one such example. This Grade 1 is the only race across the four days at Cheltenham not to include either hurdles or fences. Run over a distance of two miles and half a furlong, the Champion Bumper is open only to horses aged between four and six years of age and has been the breeding ground for many stars of the future.

Although the Champion Bumper is occasionally won by horses who usually compete on the flat, the majority of the competitors will go on to run over hurdles the following season. Despite being a relatively new addition to the Cheltenham Festival – it was first introduced in 1992 – the Champion Bumper has already produced winners including Cue Card, Champagne Fever and Envoi Allen who went on to have a host of Grade level successes between them over both hurdles and fences. 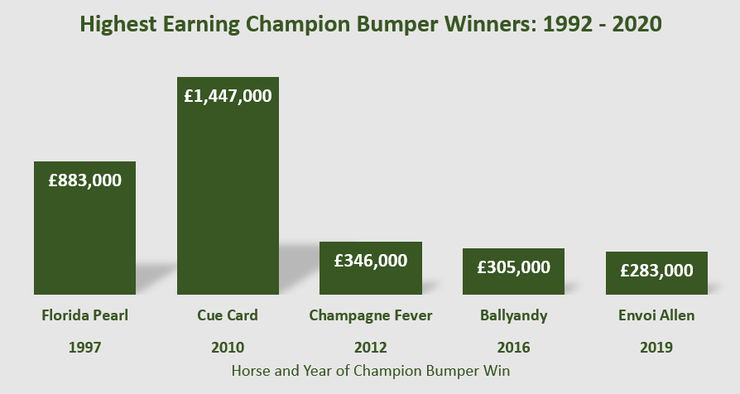 The lack of any obstacles means that there is always a caveat when assessing the form from the Champion Bumper. That said, the winner almost always features prominently in ante post betting for the big novice hurdles at the following season’s Festival. 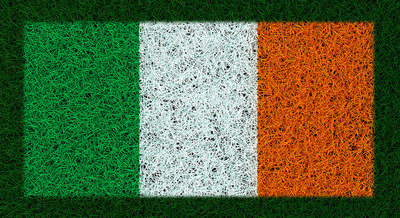 There are a lot of flat races in both Britain and Ireland in the first half of the National Hunt season which makes assessing the form quite difficult. The Irish trials are always a good place to start though as Irish trainers have an excellent record in the Champion Bumper.

Another reason for the dominance of Irish trainers is the calibre of Point-to-Point racing in Ireland. It’s commonplace for horses with a good performance or two in Point-to-Points before racing under rules to be towards the top of the betting market for the Champion Bumper.

On the betting, the odds with the bookmakers are not quite the helpful guide that they are for other races at Cheltenham. Favourites have only a modest record at best whereas longer odds horses challenge come the closing stages with regularity so this is a race that’s tailor made for each way betting.

It is also worth noting that it takes a certain amount of experience for a horse to win the Champion Bumper. On only three occasions have we seen four year old winners in the history of the race, one of whom was Cue Card who is arguably the highest calibre Champion Bumper winner of them all. 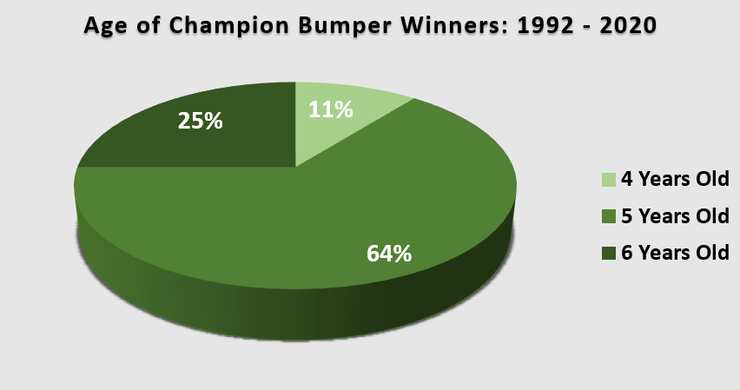