The feature race on the opening day of the Cheltenham Festival is the Champion Hurdle. Run over 2 miles and ½ furlong this is the final leg of the Triple Crown of Hurdling.

First run in 1927, some legends of the sport have won the title of Champion Hurdler, including Istabraq, See You Then and Persian War. This is the third of four Grade 1 races amongst Tuesday’s contests but is the second most valuable race of the entire festival, only behind the Gold Cup.

At 2m ½f, the Champion Hurdle begins at the end of the additional section of track to the north of the course. Runners take one hurdle before joining the main circuit of the Old Course in front of the stands and completing a full circuit.

About the Champion Hurdle: Big Prize Over the Smaller Obstacles 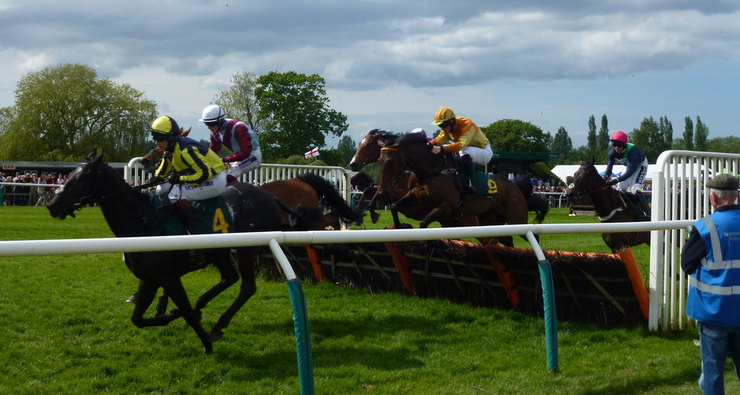 There’s not a bad race to be found at March’s magnificent Cheltenham Festival, but each of the four days does have its feature event, and in terms of showpiece contests Day One belongs to the hurdlers. Two miles and half a furlong is the trip for the Champion Hurdle with eight obstacles standing between the competitors and glory. Open to runners aged four and older, speed and fluency over the smaller obstacles is the name of the game here in a contest which has been won by a number of the true greats of the game.

First run in 1927, with inaugural winner Blaris taking home £365 in prize money, the race has only grown in prestige and value over the years, with the biggest hurdle event of the racing year now offering £450,000 (2022) in total prize money. Much of this growth can be attributed to the advent of commercial sponsorship which began in 1978 with the support of Waterford Crystal. A number of companies have stepped up to the plate over the lifespan of the race with betting firm Unibet taking over in 2018.

All Roads Lead to This 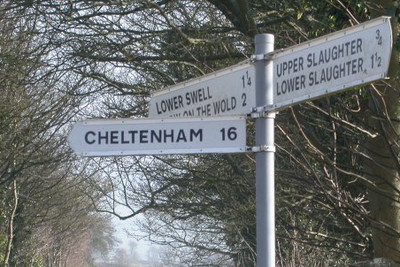 One of the most appealing aspects of the National Hunt season is the manner in which it steadily builds to a crescendo which reaches a fever pitch at the Cheltenham Festival in March. The structure of the racing calendar provides a number of strategically placed two mile hurdle contests, which – whilst being good races in their own right – are also widely recognised as being key trials for the Champion Hurdle itself.

Newcastle’s Fighting Fifth Hurdle, the International Hurdle here at Cheltenham and the – less imaginatively titled – Champion Hurdle Trial held at Haydock Park make up what is referred to as the “Road To Cheltenham” for the two mile hurdling division. Another race to throw into that mix is Kempton’s Christmas Hurdle, which together with The Fighting Fifth Hurdle and Champion Hurdle makes up hurdling’s Triple Crown.

Success in any of the aforementioned races puts the winner well on course for a potentially profitable tilt at the Prestbury Park big one. Be sure to tune in to these key trials when planning those ante post Champion Hurdle punts.

Three Is The Magic Number

Previous winners have a pretty solid record in this race considering just how highly coveted and hotly contested the prize is year upon year. Up to 2022, twenty one of the 91 editions to have taken place had been landed by a horse already successful in the race. Honeysuckle, Bula, Buveur D’Air, Comedy Of Errors, Hardy Eustace, Hurricane Fly, Insurance, Monksfield, National Spirit, Night Nurse and Sea Pigeon have all registered a double, but special mention must go to the five titans of the hurdling game who have claimed the title on three separate occasions. 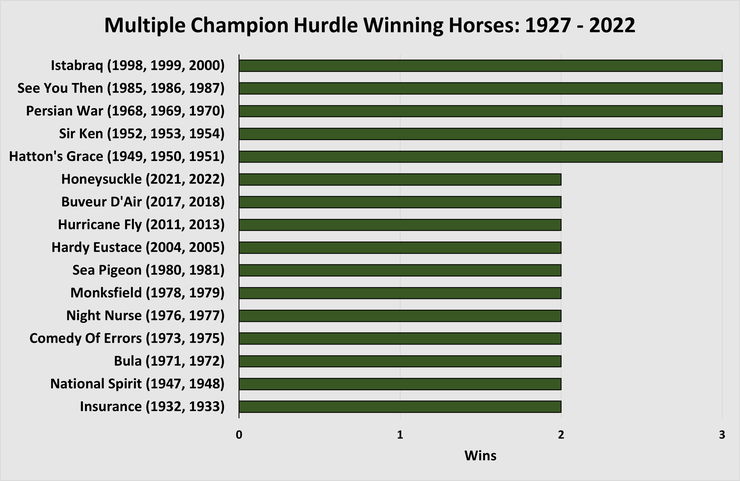 The Vincent O’Brien trained Hatton’s Grace was the first to register a treble when coming home in front in 1949, 50 and 51 and was immediately followed by Sir Ken who rattled off three successes of his own between 1952 and 1954. Next to achieve the feat was the great Persian War who dominated the division in the late 1960’s, whilst Nicky Henderson’s See You Then proved unstoppable between 1985 and 1987.

For us though the best of the lot was the most recent three time winner of the race, the mighty Istabraq. A whopping 12 lengths too good for the field in 1998, nothing could get to within three lengths of the JP McManus runner in 1999 or 2000 either, and having hacked up in the Irish Champion Hurdle in January of 2001 he was the red hot favourite to become the first ever four time champion. Whether he would have managed that feat or not we will sadly never know as the foot and mouth epidemic led to the cancellation of the meeting that year, but he nevertheless stands tall amongst the best of the former champions here.

Dawn Sure Could Run 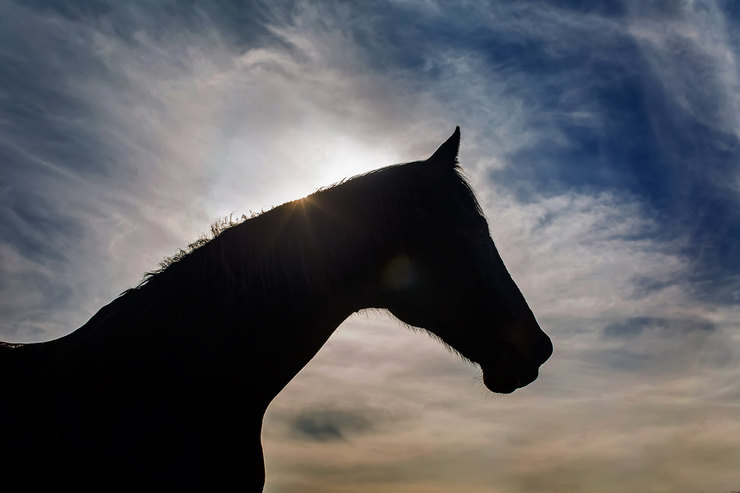 Having only won one Champion Hurdle, the mare Dawn Run perhaps can’t be compared with the likes of Istabraq when it comes to achievements in this race alone. The Paddy Mullins star did however go on to achieve something no other winner of this race has matched. Wins in the Christmas Hurdle, Irish Champion Hurdle, Aintree Hurdle and French Champion Hurdle can perhaps be expected of one successful in this race; but not only was this talented performer brilliant in two mile hurdles, she wasn’t too bad in three mile, two furlong chases either, going on to claim a famous success in the 1986 Cheltenham Gold Cup. A remarkable feat, which has not been achieved before or since.

Henderson The Hurdling Hero Amongst The Trainers

A number of trainers have compiled an impressive record in this race over the years, with the table below showing the most successful in the history of the illustrious contest. 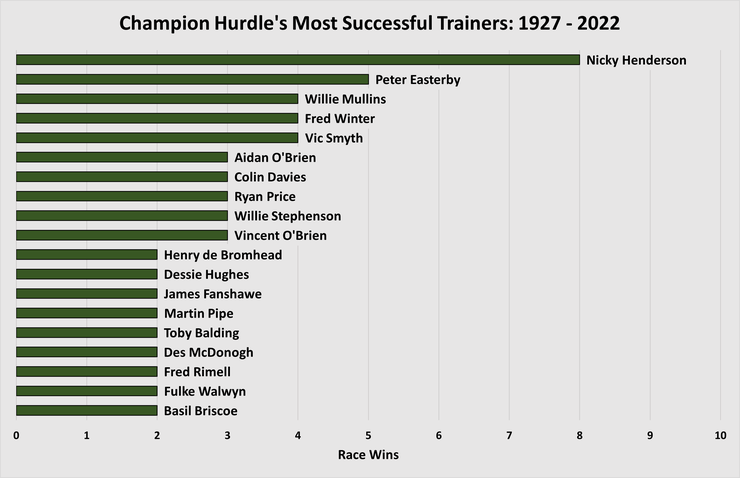 Nicky Henderson is a trainer famed for his success with hurdlers at the Festival – not that he does badly with his chasers either – and it isn’t too surprising to see that it is the Lambourn maestro who is out in front here. Vic Smyth, Peter Easterby and Fred Winter won’t be catching Henderson now, but Willie Mullins is still going strong and could conceivably lay down a challenge.

It is s generally held belief that – be it on the flat or over jumps – horses slow down as they get older, and therefore the older performers will tend to struggle over the shorter distances where speed is of the essence. The chart below would certainly suggest that that view holds true for this race, with only four of the 92 winners to date being older than nine years of age. In fact those four wins can be attributed to just the two horses, with both Hatton’s Grace and Sea Pigeon winning as a 10 and 11 year old. 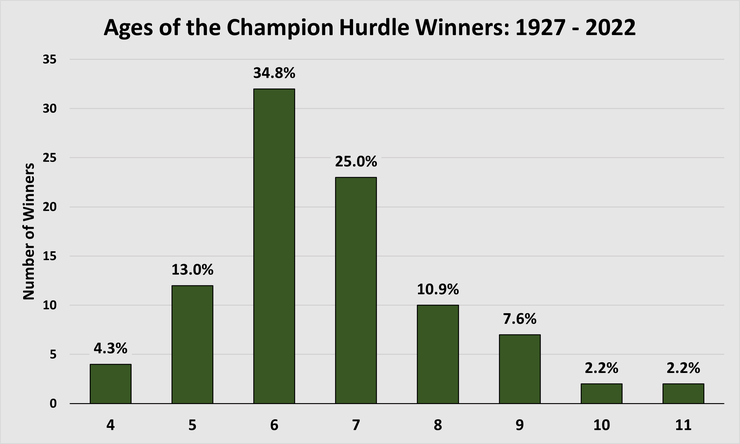 Overall the race has been dominated by runners aged between five and seven, with almost 73% of the winners up to and including 2022 falling into that bracket.