Fillies and Mares are able to take part in any of the climactic races featuring at Ascot on British Champions Day, but only the British Champions Fillies & Mares Stakes is reserved especially for them. It stands as one of the top all-female races of the season and is always able to draw in some high-quality names.

The Group 1 contest has run under several guises since its inception in 1946, as well as being swatted back and forth between Newmarket and Ascot. In all that time, no trainer has won three successive editions of the race. Aidan O’Brien was the latest to narrowly miss out on a hat-trick having won in 2017 with Hydrangea and 2018 with Magical. In 2019 Delphinia was beaten by a short head by John Gosden’s Star Catcher.

The 1m 4f British Champions Fillies & Mares Stakes begins just after the turn following the winning post with runners travelling away from the stands before taking two right-hand bends and returning to the home straight.

Horse racing is a sport full of tradition. Whether it’s races, courses or the competitors, racing is a sport that celebrates its history. It cannot thrive simply by looking backwards though. Racing has had to innovate in recent times including with the introduction of the British Champions Series.

As the final race of the division, the British Champions Fillies’ and Mares’ Stakes crowns the winner of the series and is therefore a very important contest in the flat racing season. As with the other series finals it had its name changed in 2011 with the introduction of British Champions Day which takes place each October at Ascot Racecourse.

A RACE WORTHY OF GROUP 1 STATUS 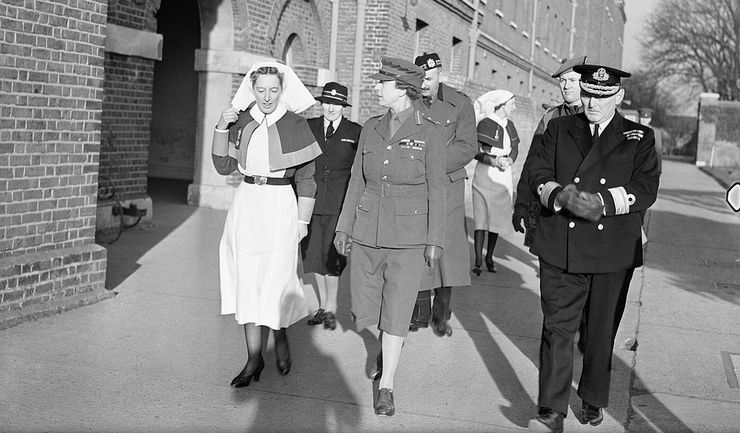 The British Champions Fillies’ and Mares’ Stakes was promoted to Group 1 status in 2013, just two years after it became one of the key races on British Champions Day. The journey to top level status actually started back in 1946 when the race was first run at Ascot as the Princess Royal Stakes, named after Princess Mary (shown above).

The Princess Royal Stakes was an instant hit with many of the leading fillies and mares competing in a race that always took place in the latter stages of the flat racing season. The prestige of the race was made clear when the current system of grading was introduced in 1971 as it was given Group 3 status.

Little has changed in the nature of the race over the years. It’s still open to fillies and mares aged three and older and run over a distance of one mile, three furlongs and 211 yards (it’s commonly written as one mile and four furlongs on race cards). The name and course have changed more than once though.

The first of those changes came in 2008 when the race was renamed the Pride Stakes and transferred to Newmarket. That move saw the race scheduled during Newmarket’s Champions’ Meeting in October and coincided with a move up to Group 2 level. The move to Newmarket proved to be short lived as the race was back at Ascot for the first British Champions Day in 2011, the first year in which it went under the current name.

Throughout the changes in venue and levels the British Champions Fillies’ and Mares’ Stakes has always produced top quality winners. The likes of Attica Meli, Snow Bride and Ouija Board have all won this contest but only two horses have one more than once – Shebeen (1974, 1975) and Crystal Capella (2008, 2010).

DUNLOP’S LONGEVITY SUMMED UP IN ONE RACE

John Dunlop’s death in 2018 hit the world of horse racing hard. The Arundel-based trainer was a permanent fixture in the lives of many involved in the sport and several leading trainers learned a great deal from Dunlop. His 3,000+ winners came over a number of decades and included many of the biggest races on the flat including the British Champions Fillies’ and Mares’ Stakes for which he holds the training record with nine wins which were spread over 40 years when it was the Princess Royal Stakes. 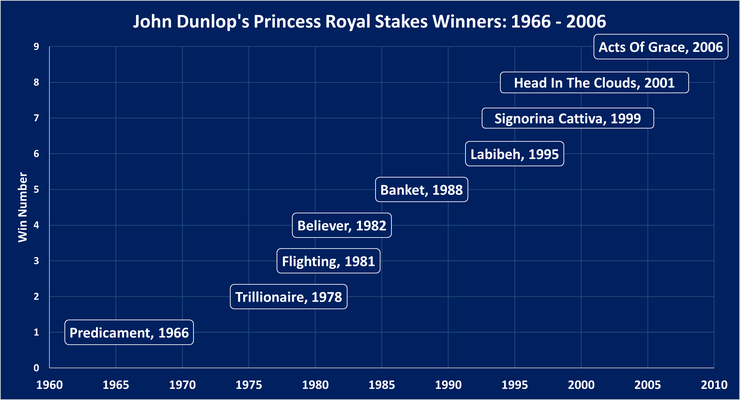 Lester Piggott, the jockey with the most wins in the race, managed just one fewer victory with eight which were themselves spread by 25 years. As mentioned above, only two horses have won this race more than once with Shebeen the only horse to win in consecutive years.