There are six other races on Friday’s card at the Cheltenham Festival, but there is a reason that the day is known simply as Gold Cup Day.

The single most prestigious jumps contest of the season, the Gold Cup is steeped in history, lasting memories and drama, thanks to the brilliance of the likes of Arkle, Denman and Kauto Star, to name just three.

First run as a flat race back in 1819, the Gold Cup as we know it today over jumps was created in 1924. Since then the race has grown rapidly in popularity and is now considered one of the sport’s crown jewels, appealing to racing fans and the wider public alike as with the Grand National or Epsom Derby.

About the Cheltenham Gold Cup: The Festival’s Finest Prize 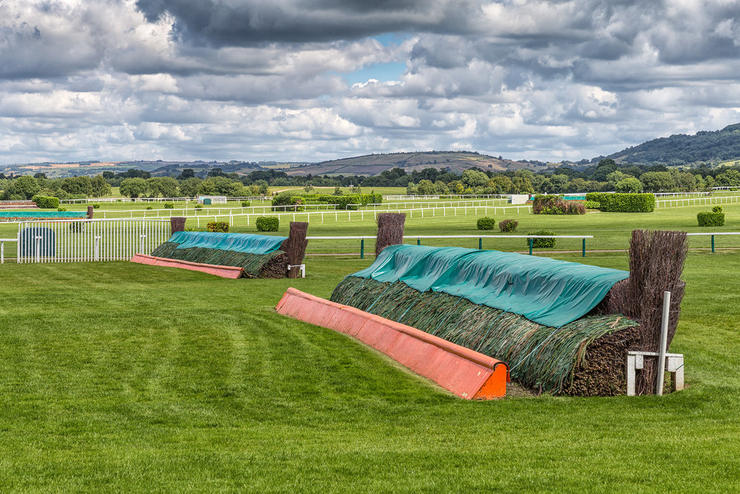 There are many “Cup” contests staged over the course of the British racing year, be it on the flat or over jumps, gold, silver or otherwise, but when it comes to prestige, profile and resonance with the racing public, there is one such race which stands head and shoulders above them all. That race is of course the Cheltenham Gold Cup.

Acting as the headline race on the fourth and final day of the magnificent Cheltenham Festival in March, this Grade 1, 3m2½f event featuring no fewer than 22 formidable fences. Open to runners aged five and older, it is just about the finest advertisement for the sport, never failing to deliver in terms of excitement, class and drama.

Stamina has always been a key requirement for success in this contest, but not always jumping ability. The first race to go under the Cheltenham Gold Cup title being a three mile flat affair which took place way back in 1819.

The history of the race we know and love today really begins in 1924 though with the first edition of the event to be contested over obstacles. Now the jewel in the National Hunt crown, the Gold Cup wasn’t always the most glittering prize on the Cheltenham roster, being upstaged by the National Hunt Chase and County Hurdle in its early years. A succession of classy and hugely popular winners, in addition to rapidly increasing prize money – now £625,000 (2022) – would soon change that though. 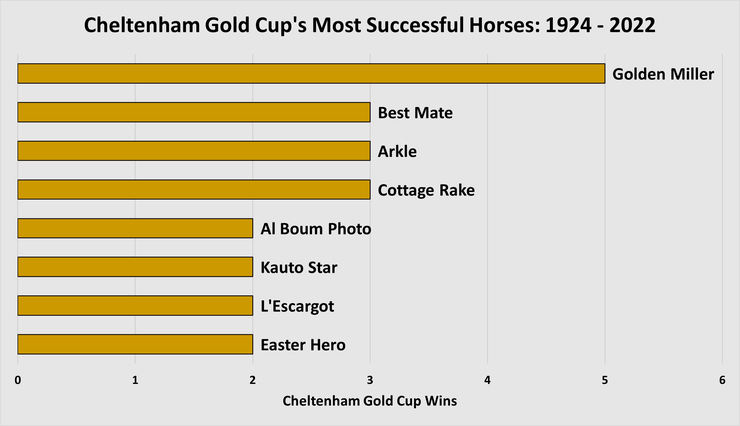 Chances are that even non-racing fans will be familiar with at least a couple of the horses in the above chart. The fact that the likes of Arkle, Best Mate and Kauto Star are names which transcend the sport is in no small part down to their exploits in this contest.

Topping the pile and two clear of the field in terms of number of wins is the legendary Golden Miller. Simply unstoppable around here between 1932 and 1936, his five victories make owner Dorothy Paget the most successful owner in Gold Cup history with a total of seven. As of 2021 Golden Miller remains the only horse to win both the Gold Cup and Grand National in the same season (1934), a feat unlikely to be repeated.

It is only fitting that National Hunt’s greatest race has been won by the sport’s greatest ever exponent. Officially rated the most talented chaser of all time, the imperious Arkle took top honours in three consecutive years between 1964-1966. It is the success of Arkle and his huge Irish following which really cemented the love affair between Britain’s most prestigious jumps race and our friends from the Emerald Isle – an affair began with Vincent O’Brien’s three-time winner Cottage Rake and which continues as strongly as ever to this day.

Moving into more modern times, Henrietta Knight’s tough and talented Best Mate would not be denied between 2002 and 2004 and deserves his place on the list of best ever winners, but even he was outshone by the Paul Nicholls trained Kauto Star.

A record breaking five time winner of the King George VI Chase at Kempton, Kauto Star may only have won this race on two occasions, but the second of those successes set him apart from the rest. Too good for the field in 2007, he then had no answers to the grinding assault of the horse known as “The Tank”, as stablemate Denman saw off all comers in 2008. What then followed in 2009 was simply sensational as Kauto Star put in a jaw dropping display to pulverise the opposition to the tune of 13 lengths, becoming the first and – as of 2022 – only horse to ever reclaim his Gold Cup crown having lost it.

The Long And The Short Of It

Given their utter dominance of the chasing game during their careers, it’s no surprise that the names of Golden Miller and Arkle are to the fore when looking at the shortest priced winners of the race. Golden Miller started at 4/7 in 1933 and 1/2 in 1935, but even those prices look big compared to those returned by Arkle. Coming home in front at 30/100 in 1965, the cat was well and truly out of the bag one year later, with horse known simply as “himself” being sent off at odds of just 1/10!

This race doesn’t always go the way of the market leaders though. Gay Donlad (1955) and L’Escargot (1970) both returned SP’s of a rewarding 33/1. However the biggest shock of them all came in 1990. Supposedly well out of his depth and there to make up the numbers in the eyes of many, the Graham McCourt trained Norton’s Coin defied them all to come home in front at a massive 100/1.

The Young And The Old

Open to all chasers aged five and older, it is nevertheless rare for one so young as five to have the necessary mix of talent and maturity in order to come out on top. So rare in fact that as of 2022, only three runners have achieved such a feat: Red Splash (1924), Patron Saint (1928) and most recently Golden Miller in 1932. It’s certainly been a while since this has been a race for the youngsters.

At the other end of the spectrum we have a couple of horses for whom father time proved to be no obstacle in pursuit of jump racing’s most coveted prize. Silver Fame (1951) and What A Myth (1969) both came home in front at the grand old age of 12. Overall though – as with many chase contests at the festival – it seems that the ideal window of opportunity lies between seven and nine years of age. 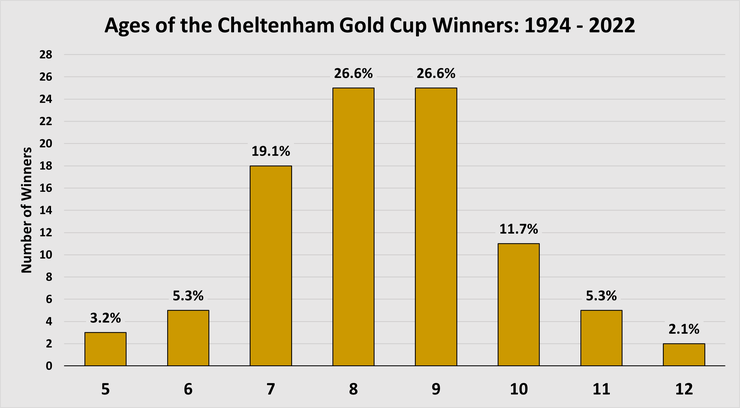 Propelled by Arkle’s three wins and topped up by further successes from Prince Regent (1946) and Fort Leney (1968) it is Tom Dreaper who leads the way amongst the trainers here. Legends of yesteryear, Vincent O’Brien, Fulke Walwyn and Basil Briscoe won’t be catching him now, but sitting on four wins as of 2022, multiple Champion Trainer Paul Nicholls just might.

Aboard Arkle for his three successes and also Fort Leney, Pat Taaffe leads the jockey standings with four wins. A special mention goes to Rachael Blackmore who in 2022 became the first female jockey to win the Gold Cup when riding A Plus Tard to victory having finished runner-up in 2021.