Chester’s spectacular May Festival gets underway at the beginning of the month and the Chester Vase is one of the top picks of the opening day.

It is recognised as one of the trial races for the Derby and 2017 Vase runner-up, Wings of Eagles, went on to win the big race at Epsom.

The first Chester Vase was run over 100 years ago in 1907. That raced produced the contest’s only dead-heat to date, between Earlston and Sancy.

Irishman Aidan O’Brien is the most successful trainer of Chester Vase winners with ten victories between 2007 and 2022.

The 1m 4f Chester Vase begins to the south of the course, traveling towards the home straight, passing the winning post before completing a further circuit.

About the Chester Vase

The Chester Vase is a horse race run on the flat at Chester’s popular race course in May of each year. The race is only for three year old colts and geldings, meaning male horse, and castrated male horses. The contest was first run all the way back in 1907 and was open to both three and four year old horses initially, and run over a distance of 1 mile 5 furlongs and 75 yards. Interestingly that first ever renewal ended in a dead heat and we’ve certainly had our fair share of thrilling finishes over the years.

In 1959 changes were brought in that only allowed for three year olds to take part in the contest and also shortened the length to 1 mile 4 furlongs and 53 yards. Then in 1970 an additional 10 yards was added to the race distance. The high profile event was abandoned both in 1969 and in 1983 due to a waterlogged course. There was also no race in the war years of 1916-18 or 1940-45, whilst 1921 is also a year missing from the history of the Chester Vase.

A Partnership Made on the Flat

When it comes to comparing the successful jockeys over the years there is one man who has a standout record when it comes to this event. Ryan Moore has an astounding eight wins in the Chester Vase, and what makes it even more amazing is that Moore had five wins in succession between 2013 and 2017, with him having picked up all of his wins to date between the years of 2008 and 2022. 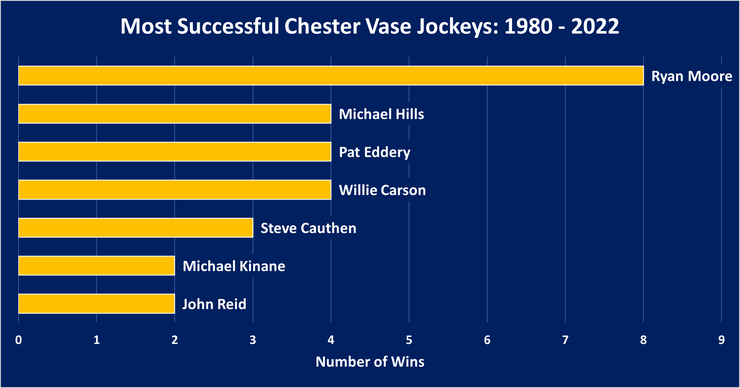 One of the reasons the brilliant Moore has been as successful as he has been is down to his partnership with the record holding trainer for the event. That record holder is none other than Aidan O’Brien and the man from County Wexford has achieved first place an incredible ten times up to and including 2022. 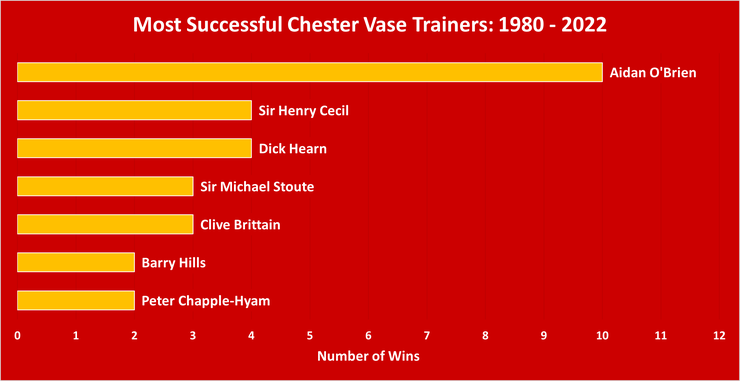 Also, just like Moore he has amassed his wins over a relatively short space of time, with his ten wins over the course of 15 years from 2007 to 2022, with Moore having taken charge of seven of those winners in what is one of flat racing’s best partnerships

The Chester Vase is used as a benchmark for how some horses will fare in the similar conditions in the first week of the following month when many of the same horses will line up for one of the oldest races in the calendar, the Epsom Derby.

In fact, in 2017, Wings of Eagles, who was the runner up in the Chester Vase, tasted glory shortly after when claiming first place in the Derby. Before that Ruler of the World was the 2013 Derby winner after taking part in the Chester affair.

When looking at who may have a chance of achieving success at Chester there are many different things you may consider. We choose to look largely at the horses who have performed rather well with similar weight, and who seem to do well staying the 12 furlong distance. These will give you an indication as to how the horse will manage under the Chester Vase conditions.

Another area which is always best to look at is the recent trends stats regarding winning jockeys and trainers. As mentioned before the Moore and O’Brien partnership has been massively successful over recent years. However this does not mean that other jockey and trainer combinations are not also highly successful and even just looking at those who are in currently good form can sway the odds in your favour.

For example, Frankie Dettori has only won this race once, but you can be assured that any horse who has him in the saddle will be in with a great chance of success. This race really is one that has attracted the biggest names over the years and as well as top jockeys and trainers, we have also seen some equine greats winning on the Roodee. The following all tasted success here and more brilliant horses are sure to follow.