Newmarket’s three day Cambridgeshire meeting draws to a close on the Saturday, with an excellent seven race card on offer. One of the highlights of which being this 6f contest for the juvenile fillies, the Cheveley Park Stakes.

First run in 1899, the race is named after the Cheveley Park estate in Newmarket, which is now home to the Cheveley Park Stud farm. They have owned three winners of this contest with Gay Gallanta in 1994, Regal Rose in 2000 and Hooray in 2010.

Expect to see leading performers from the contest wind up in the 1,000 Guineas the following Spring as has traditionally been the case. The last winner to go on and land the 1m fillies’ classic was Special Duty for trainer Criquette Head and owner Khalid Abdullah.

About the Cheveley Park Stakes: Fillies to the Fore

One of the most famous racecourses in the land, and the official headquarters of the flat racing game, the Suffolk venue of Newmarket of course hosts many high quality contests throughout the season. From the juveniles, to the handicappers and on to the Classic hopefuls, just about all are catered for over the course of the campaign.

When it comes to those juvenile contests – and specifically those restricted to the fillies – this September contest, which takes place on the third and final day of the hugely popular Cambridgeshire meeting, isn’t far off the top of the pile.

First run way back in 1899, and named in honour of one of the estates of army officer, politician and ardent racing enthusiast, Harry McCalmont, this Group 1, six furlong affair remains essential viewing for those seeking a glimpse of a future star or two.

The trip may be two furlongs shy of the 1,000 Guineas, which takes place at this course in late April/early May each year, but the Rowley Mile track is the same, and a proven ability to handle the famed dip certainly can’t hurt when it comes to landing the opening fillies-only Classic of the season.

This race does in fact boast a fair record when it comes to signposting the winner of one of the jewels in the crown of the fillies’ flat season, with 15 winners in total going on to Guineas glory. The flying fifteen are shown in the table below.

Alec Taylor, Jnr set the early benchmark for the number of wins by a trainer in this race when landing the prize for a fourth time in 1924. It was an excellent record, and one which stood for 85 years until French handler Criquette Head-Maarek registered a fourth success of her own with her subsequent 1,000 Guineas heroine, Special Duty in 2009.

Having retired in 2018, Head-Maarek won’t now be adding to her tally, and it wasn’t too much of a surprise when she was joined on four wins by one of most successful trainers in the modern era, Aidan O’Brien. The list of the top post-war trainers is shown in the chart below with Sir Michael Stoute at the head of the chasing pack. 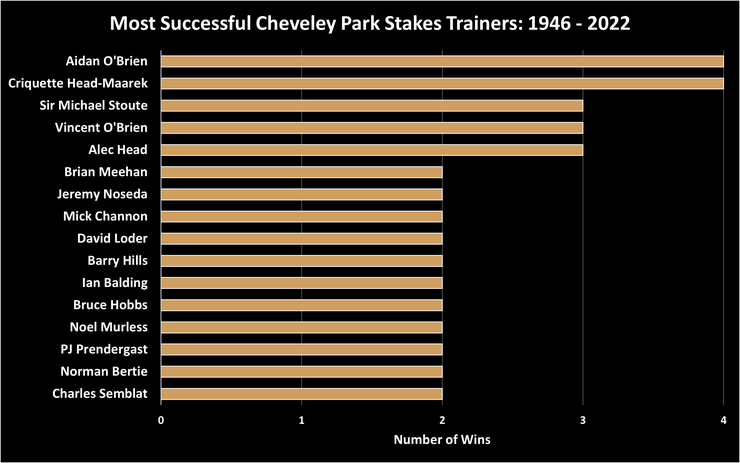 Sir Gordon Out On His Own

There are differing opinions when it comes to the greatest flat jockey in the history of the sport, with the likes of Lester Piggott in particular having plenty of supporters. In the eyes of many though it is Sir Gordon Richards who stands tall above the rest, and it is certainly not hard to make a pretty compelling case for the man who remains the only flat rider to have been knighted as of 2022.

He was champion jockey a staggering 26 times, and winner of an incredible – and record setting – 4,870 races during his career, Gordon’s place in the history of the sport is assured.

What is also assured, at least for the foreseeable future, is the fact that no rider has landed this prize on as many occasions as Richards. His impressive total of nine victories puts him four clear of Pat Eddery in second place.