Prominent amongst the big highlights on Day 5 (usually Day 4) at the marvellous Royal Ascot festival is this top class contest for fillies. Won by the likes of Russian Rhythm, Attraction and Winter over the years, this is one of the real championship contests for the Classic generation.

This race dates back to 1840 and was created to commemorate the coronation of Queen Victoria in 1838. As a mile contest purely for three year old fillies, the Coronation Stakes attracts horses who have previously competed in the the British, Irish and French 1000 Guineas races.

Heavy rain on Thursday was enough to turn the predicted going at Ascot from good to soft. Better weather on Friday and Saturday may just dry things a shade but it certainly won’t be too quick. This year we have a small field of seven runners competing for the biggest share of the lucrative £250,000 prize pot.

There has been a rather formidable French invasion in this race during the past few years. French trainers have claimed victory across three of the last five renewals, Jean Claude Rouget in 2015 and 2016, and Francis-Henri Graffard in 2019.

There will be nobody flying the blue, white and red this time around although we do have an American guest in Graham Motion. As for more long-standing data, 17 of the last 18 Coronation Stakes winners finished first or second prior to Royal Ascot. The very same number also had at least one run earlier the same season. Despite these strong trends, Quadrilateral, who finished third last time out and Alpine Star, who is yet to feature this season, top this renewal’s market.

All of the principle figures in terms of jockey, trainer and owner stats all plied their trades a long time ago, mostly at the end of the 19th century in fact. That said this race has been kind enough to Ryan Moore recently, Aidan O’Brien’s man taking this in 2017 (Winter) and 2014 (Rizeena). He will ride winless filly So Wonderful here.

Despite her failure to win as an 11/4 favourite in the 1,000 Guineas last month, punters have lost little faith in Quadrilateral. Roger Charlton’s filly was disappointing when it mattered most and finished more than four lengths off the pace that day, easily beaten Aidan O’Brian’s Love.

While we expected much better from her, in fairness it was far from a poor showing. Even so, we may need to see a little more from her if she is going to return to winning ways. Charlton has dropped the tongue-tie that debuted at Newmarket and this could spark some minor improvements. She may also benefit from a slightly more patient approach, something that served her and jockey Jason Watson so well last season. At longer odds, we would be very tempted to have a flutter but as things stand better options are available and 5/2 looks much too short to us.

One horse ticking both the key trends for this race is John Gosden’s Run Wild. Having ended last season with a couple of good efforts, the filly returned as an 11/2 shot for the Pretty Polly Fillies’ Stakes at Newmarket. The three-year-old put in by far her best performance to date, making light work of her opponents in the Listed quality contest.

The off-season break has been very kind for the German filly who looked an impressive unit on the recent comeback. Although that test was over 1m 2f, Ascot’s long-climb to the finish and the likely soft conditions will place a similar emphasis on stamina as was faced then. There looks to be even more to come from her so she is one you need to keep your eye on.

If not Run Wild, perhaps we can interest you in Cloak of Spirits, priced at a quite generous 6/1. We say generous because Richard Hannon’s filly pipped Quadrilateral to second place during the 1,000 Guineas. It was a completely fair fight too but the daughter of Invincible Spirit always looked like holding off the challenge.

Having also beaten the talented Queen Daenerys at Ascot last season, this former course winner carries plenty of appeal. Andrea Atzeni will need to get things right on the saddle but if he can, and we know he is more than capable, Cloak Of Spirits has the turn of speed required to get herself first over the line.

About the Coronation Stakes 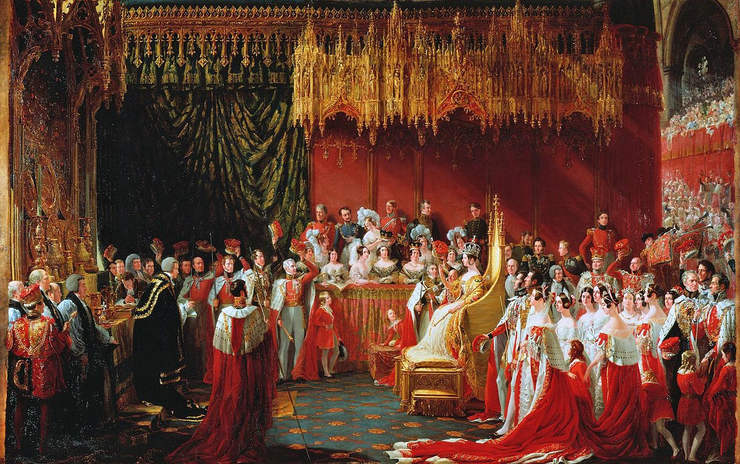 Standing as the leading contest on day four of Royal Ascot, run on the final day in 2020, is the mile long Coronation Stakes. Named to commemorate the coronation of Queen Victoria two years earlier, this race has been on the go since 1840. It’s been an ever-present feature at Ascot since, postponed only when Ascot closed during times of war. Initially handed Group 2 status when the present system of grading was introduced, a number of high quality performers in the 1980s triggered its promotion to Group 1 in 1988.

The race is one of several top quality affairs strictly reserved for three-year-old fillies. Others include the 1,000 Guineas, the Poule d’Essai des Pouliches and the Irish 1,000 Guineas, which are also run over a distance of one mile. This is arguably the most sought after of the lot though thanks to its recent purse increase. In 2018 the Coronation Cup was valued at £538,750, a huge 25% increase from the previous year. This dropped to £500,000 in 2019 and will be £250,000 in 2020.

It’s common to find fillies that feature in the 1,000 Guineas or the Irish 1,000 Guineas winding up in this race. Runners in the Poule d’Essai des Pouliches do sometimes make the move across the Channel for the Coronation Stakes too although this is less common. The result of either the British or Irish Guineas has been a reasonably strong predictor of how this race turns out and it’s certainly of some worth to heed the results. As you can see from the table below, when winners of the Classic races do feature here, plenty are able to at least meet expectations.

THRILLING FINISH TO A SPECIAL 2013 RENEWAL

There is never a bad Coronation Stakes race but there are some that are more memorable than others. One that will stick in the mind of many racing fans is the 2013 edition of the race, won by Richard Hughes’ Sky Lantern. That year saw a field of 17 go for the Group 1 prize, making it the most well-attended renewal since the turn of the century. With a furlong left to go five horses were level pegging at the front of the field. It looked to be anyone’s for the taking but Sky Lantern put the burners on to swallow the lot of them on her way to an emphatic four length victory. 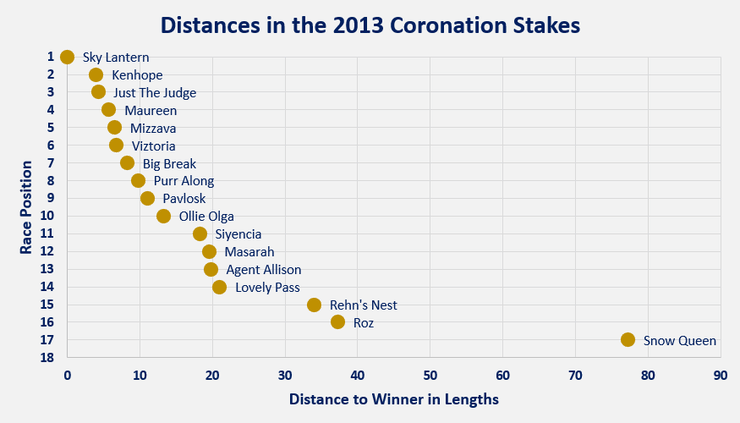 Make of this what you will but there has been an unusual bias towards horses starting in odd numbered stalls in this race. From the last 20 renewals, they’ve accounted for 16 winners (76%) with gate 11 (24%) being the most successful of the lot. 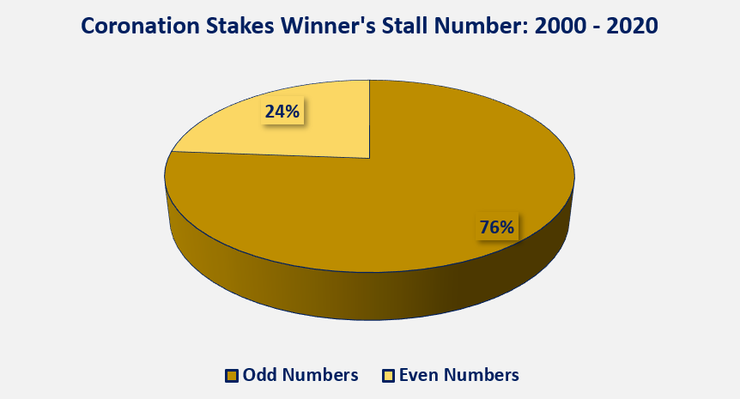 While it could easily just be the possibility of pure fluke, the lack of success of the inside runner is unlikely to be. Fillies who have been drawn in gate one haven’t claimed victory a single time this century, a winless streak long enough to make you suspect they are at some disadvantage.