Dante was the last horse trained in Yorkshire to win the Derby and it’s in his honour that this race is named. It’s usually the highlight event of the three day festival of the same name at York Racecourse, taking place at the midway point on the Thursday. This year the meeting was cancelled with this race rearranged.

This race normally serves as one of the major trials for the following month’s Epsom Derby but in 2020 this was run in July, the week following the Derby.

This Group 2 contest offers £55,000 in total prize money this year, and sees the runners tackle 1m2½f of the Knavesmire track. The ground is currently described as good, but this looks likely to change as the race approaches with a fair amount of rain forecast in the area.

This year has been a little out of the ordinary in more ways than one, and that has certainly extended to the sport of racing. One of the biggest signs of the slightly unusual 2020 racing programme is the fact that this race, which is traditionally one of the key Derby Trials, will now take place after the big one at Epsom. It still looks set to be an enthralling renewal though, as a select field of six go to post.

Sir Henry Cecil holds the all-time lead in this race amongst the trainers, with the racing legend having registered seven successes over the course of his illustrious career. Bidding to join Cecil atop the table in 2020 is Newmarket handler, Sir Michael Stoute. The six time winner might just do it too, as it is Stoute who is responsible for the well-fancied market leader this year.

Not that this has been a particularly good race for the favourite of late, with only one jolly coming home in front in the past ten years, resulting in a level stakes loss of £6 for supporters of the market leader.

If Sir Michael Stoute is to draw level with Sir Henry Cecil this year, then it would be fitting that Cecil’s most famous horse would have a significant role in the victory, with this year’s hotpot, Highest Ground, being sired by none other than the mighty Frankel. Sporting the famous colours of the Niarchos family, this striking bay has some way to go if he is to match his brilliant father, but has at least started in the right manner in landing each of his two career starts to date.

A two and three quarter length win on debut at Leicester last season was all the more noteworthy considering he completely blew the start, and endured something of a rough passage, before powering right away once in the clear. Fast forward to the current campaign and the mount of Oisin Murphy showed he had trained on nicely when putting the useful Waldkonig to the sword over this trip at Haydock. That was admittedly only a novice event, but the runner up that day had previously been beaten a similar distance by subsequent French Derby winner, Mishriff, so the form has a solid look to it. Still very much falling into the “could be anything” category, Highest Ground is seemingly held in very high regard and looks set to go close for a trainer who does so well in this race.

Juan Elcano brings Classic form to the table having finished fifth in the 2,000 Guineas, whilst Richard Hannon’s Al Madhar is a perfect two from two headed into the race and looks to have plenty more to offer. However, if there is to be an upset, then the horse most likely to do it may well be the Aidan O’Brien-trained, Cormorant.

Being by Kingman and out of a Dansili mare, this Michael Tabor-owned runner wouldn’t be a typical Ballydoyle runner on pedigree, but has nevertheless displayed definite promise in his four career starts to date. Breaking his duck at the second time of asking during his juvenile campaign, he then ran a respectable race to finish fifth behind Mogul in a Group 2 before running only adequately at Chelmsford, when appearing not to be in love with the all-weather surface.

Moving on to the current season, this good looking grey looked to feel the benefit of the first time blinkers when making all the running to land the highly regarded Derrinstown Stud Derby Trial at Leopardstown. Stablemate Russian Emperor chased him home that day, and with that horse having since gone on to win the Hampton Court Stakes in good style, and finish seventh in what was a strange Epsom Derby, the form has a bit of depth to it. Solid and experienced for one his age, he has the assistance of James Doyle in the saddle, and likely won’t be too far away.

About the Dante Stakes 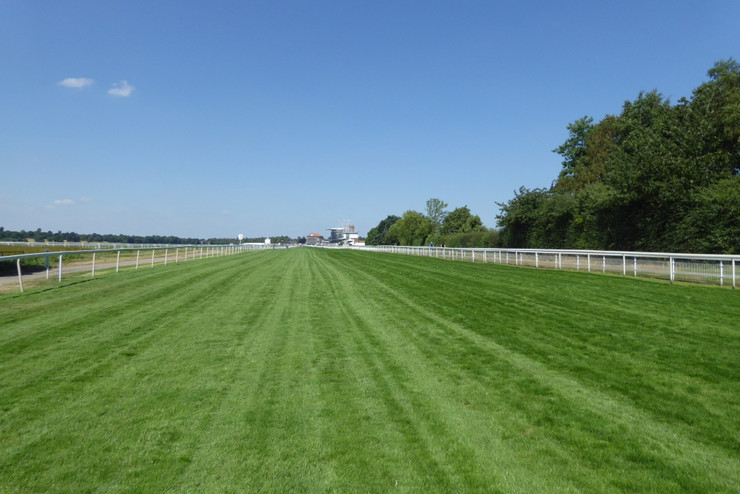 Flat racing has an incredibly rich history. As well as looking forward to the big races to come, racing fans have a keen interest in the past and get near constant reminders of this history throughout the flat racing season.

The Dante Stakes is one such example of this. The prestigious and important Group 2 race is run every year at York and was named to pay homage to a hero of northern racing. Dante won the Coventry Stakes and Middle Park Stakes as a two-year-old to show his promise in 1944 before winning the Derby at Epsom the following year. He remains the final northern-trained horse to win the Derby and is celebrated by this contest every year.

A FIELD FULL OF DERBY HOPEFULS

The name of the Dante Stakes is especially apt as it is used by many trainers as a valuable trial for the Derby. In that regard, the Dante ensures that racing in the north of England remains important to the Derby given the number of horses that have won at Epsom following a win at York.

The main role of the Dante Stakes is for Derby hopefuls to prove their class over a middle distance trip. The Derby is no longer simply the second step along the way to a potential Triple Crown. It is now arguably the biggest of the three Classics for colts as the 1 mile 4 furlong trip is where the money is in terms of races and future breeding prospects. The Dante Stakes is run over two fewer furlongs but getting it done over 1 mile 2½ furlongs is a big box to tick for any horse being sent to the Derby.

In addition to the list of winners of both events below, several horses have hit the bar in both races since the inaugural Dante Stakes in 1958 so the form really is worth taking seriously.

WHAT DOES IT TAKE TO WIN THE DANTE STAKES?

As a Group 2 race which is a warm up for the Derby, the variables for the Dante Stakes are a little limited in as much as it is only open to three-year-olds and that all the horses carry 9st (fillies get a 3lb allowance). There is more variety in the ground which can be anything from good to firm, to good to soft towards the end of May at York. Taking the ground into consideration is always important but many of the competitors are making a step up in trip so a relatively small fraction of previous winners have won over 10 furlongs or longer.

Punters tend to have a difficult time with the Dante Stakes. Although four of the last six winners had at least two wins on the flat and there is no realistic chance of that trend ending in the coming years, Roaring Lion’s win in 2018 was the first time a favourite had won since Authorized in 2007. 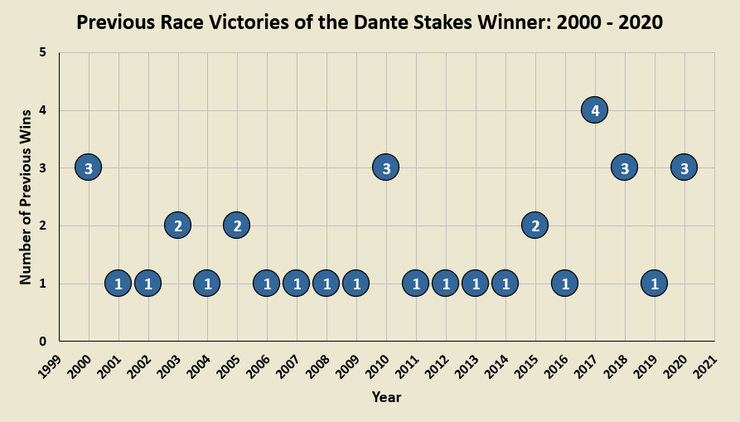 Although previous winning form is vital, such form in Group level company is not a necessity which is one reason we’ve seen winners go in at big odds of 33/1, 12/1 and 10/1 in recent years. Good luck!