The Cheltenham Gold Cup is, by many indicators, the biggest National Hunt race of the season. It’s not the only Gold Cup run at Cheltenham racecourse though. The Caspian Caviar Gold Cup (also known as the December Gold Cup) has taken place annually at Cheltenham since 1963.

It’s a very different race to the Gold Cup though, as it is run over a distance of 2m4½f, includes 17 fences for the horses to overcome and is held at Grade 3 level. The Caspian Caviar Gold Cup is also a handicap and a very competitive one at that.

This handicap chase event is set to be run on good to soft ground and the weather is set fair from now until after racing. There is £130,000 in total prize money on offer.

Winners of the Caspian Caviar Gold Cup usually go on to compete in the Cheltenham Festival later in the season. Last year’s winner, Frodon, went one better by returning in January to win the Grade 2 Cotswold Chase and then winning the Ryanair Chase at the Festival. That win in March was actually Frodon’s fourth appearance in a row at Cheltenham and he had run several times at the course before (including winning this race in 2016). That’s fairly typical of a Caspian Caviar Gold Cup winner with 12 of the last 17 winners arriving with previous chasing experience at Cheltenham.

Experience is only so important though as older horses do not have a good record in this race. You have to go back to 1993 for the last time a horse older than eight won the Caspian Caviar Gold Cup.

The other thing to concentrate on is incoming form. Trainers must tow the right line between freshness and fitness. The stats show it’s tough for horses who haven’t had a run in the last five weeks but any horse who has run too soon to the Caspian Caviar Gold Cup will equally struggle.

Hailing for the Paul Nicholls yard, seven year old Secret Investor hasn’t run at Cheltenham before but there are signs he could give this one a very good go. He won at Grade 2 novices’ chase at Ayr last April and another at Wincanton the month before that. He has also tended to perform well when running on good to soft ground, which is what is expected here.

While he doesn’t perhaps have the solid speed of one or two others in the field, Secret Investor is a steady and determined performer who is always liable to mix it in the places at least. He is perhaps just a shade short in this one given he’s carrying 11st 7lb in weight, but it would come as no surprise if he features in the closing stages.

Those looking for an option in the betting who is better treated by the handicapper than the favourite could do a lot worse than to back Good Man Pat. The six year old’s preparations for Saturday saw him compete in a 3m handicap as Ascot just three weeks ago. Alan King will have taken heart from his fourth place finish as he jumped well enough and seemed to cope with the trip.

Good Man Pat is still inexperienced over fences compared to many of his rivals in the Caspian Caviar Gold Cup. Some will worry that will hinder his chances but others of a more optimistic bent are excited about him making considerable improvement.

Nobody knows what the future holds for Good Man Pat and it appears that King isn’t even sure what route his horse will take. His performance at Ascot suggested he was a classy stayer in the making but there is obviously hope that he is either a versatile performer or one who can perform best over the middle distances. We’ll learn a fair deal about Good Man Pat on Saturday where he looks a tempting each way bet at 10/1 and will only have to carry 10st 7lb.

Brelan D’As is another who looks well treated at the weights. He’s another who arrives ready for the Caspian Caviar Gold Cup on the back of an encouraging performance at Cheltenham. He was helped by the fall of Slate House at the penultimate face but take nothing away from his run.

Connections were particularly pleased that Brelan D’As jumped well having unseated his rider in his first race of the campaign and that he kept going right to the line. Paul Nicholls has trained more winners of this race than anybody else so it’s always worth taking note when he believes a horse is good enough to win. Brelan D’As certainly has a good enough shot to suggest his odds of 10/1 are worth chancing.

About the December Gold Cup: Handicapping Highlight At Prestbury Park

For the majority of jumps racing fans, it is the Cheltenham Festival which represents the season’s ultimate destination. There is nothing wrong with that, of course, with the four-day bonanza representing one of the very best sporting events of the year for our money. There’s plenty of racing to be enjoyed before the big event comes around each season though, including a steady stream of quality fare from Cheltenham racecourse itself.

One of Cheltenham’s highlights of the winter months is this 2m4½ Grade 3 handicap chase affair, open to runners aged four and older. First run in 1963 when coming into being as the Massey Ferguson Gold Cup, the contest maintained this title until 1980, since when it has been backed by a variety of sponsors, including Boylesports and a spinal research charity, with Caspian Caviar taking over ahead of the 2014 renewal.

Held on the New Course and featuring 17 fences in all, the race regularly attracts runners from the BetVictor Gold Cup which is run under similar conditions and held on the Old Course here in November. 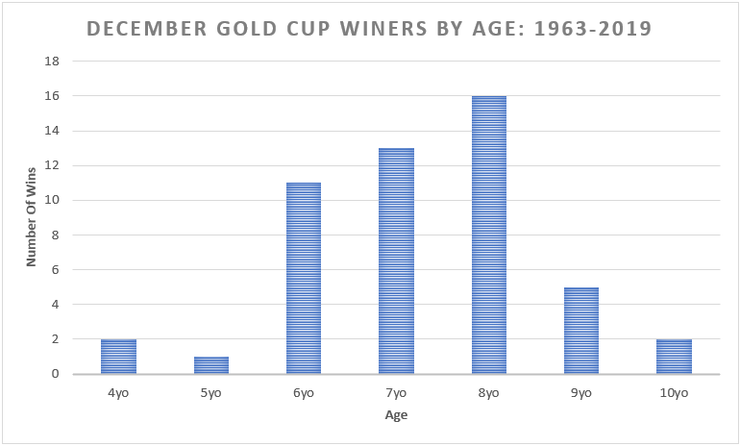 Open to all runners aged four and older, the youngsters have tasted success only occasionally, with the Paul Nicholls-trained duo of Unioniste (2012) and Frodon (2016) being the only runners to defy their relative inexperience and score at four years of age.

As we can see from the above chart though, it is the six to eight year old age bracket which has dominated in this contest, with 80% of the winners between the years of 1963 and 2019 falling into this category. 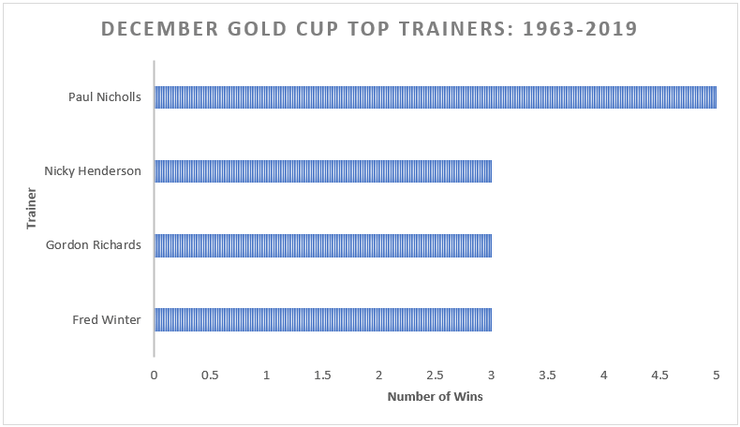 The list of leading trainers is headed by two greats from yesteryear, and two of the most successful handlers in modern times. Gordon Richards and Fred Winter won’t be adding to their haul now, but fellow three-time winner Nicky Henderson may well do, and could yet threaten the all-time lead held by his major rival on the British training scene.

It is the name of 11-time British Champion trainer Paul Nicholls which currently heads the table here. Successful four times in Cheltenham’s most famous of all the races at The Festival in March, the Cheltenham Gold Cup, Nicholls has done even better in this race, with the victory of Frodon in 2018 being his fifth in total.

Frodon deserves special mention here, with that 2018 success being his second in this race, making the future Ryanair Chase champ just the second dual winner of this ultra-competitive event. The first to achieve that feat was Poquelin who landed back to back renewals in 2009 and 2010. The trainer of Poquelin? None other than Paul Nicholls.

Bolt The Best Of The Lot

The greatest ever winner in the history of this race came relatively early in its lifespan, in the shape of Tom Dreaper’s 1965 victor, Flyingbolt. In addition to a victory in this race under the welter-burden of 12st6lb, the impressive chestnut also registered victories in the Supreme Novices’ Hurdle, the Irish Champion Hurdle, the Arkle Challenge Trophy, the Queen Mother Champion Chase and the Irish Grand National.