The pick of the seven races on offer on Future Champions Day – from a class perspective at least – is this often influential heat for the juveniles, the Dewhurst Stakes.

Run over a distance of seven furlongs, this was first run back in 1875. In that time, the race has produced many classic winners, the most recent being 2016 winner Churchill who went on to win both the English and Irish 2,000 Guineas for Aidan O’Brien.

The runners and riders are faces with a trip of seven furlongs for this Group 1 affair which is one of the most prestigious contests of the season for the juveniles. The race offers total prize money of an excellent £427,000 and the ground at the track is currently described as soft.

The name of Aidan O’Brien rarely seems to be too far from the summit of the trainers’ table in any of the top British or Irish Group 1 events, and that is the case once again here. With a total of six previous wins in the race, O’Brien is only two successes off a tie for the all-time lead, and is comfortably the most successful of the trainers represented this year.

With five previous wins to his name, Kevin Manning has some way to go to catch all-time leader Lester Piggott’s 10 victories, but he is the most successful of the riders on show in 2020. Manning gets the leg up on the Jim Bolger-trained Poetic Flare this year.

The favourites boast an impressive 70% strike rate in this event across the past decade. There were no great prices amongst those seven winning jollies, with the biggest being the even money returned by Too Darn Hot in 2018. Still, there’s been enough to edge supporters of the market leader into a level stakes profit of £1.60 over this period.

Given their renowned success with juveniles, it is a little surprising to note that neither Richard Hannon Snr nor Richard Hannon Jr has ever won this race. Bidding to change all that this year – and in with a pretty good chance of doing so according to the market – is the Wootton Bassett colt, Chindit.

Looking a horse of some potential when winning a decent maiden contest on debut at Doncaster back in July, he has gone on to back up that promise with successes at both Listed and Group 2 level. One of the most notable aspects of his three wins to date is just how smooth they have been – each time coming from a little off the pace to forge clear in the closing stages, without ever really appearing to be under maximum pressure.

His win in the Champagne Stakes last time out would look to represent just about the best from on offer here, with both the close up second and third being held in very high regard, and there being a mile back to the fourth placed finisher. A length clear of the re-opposing Albasheer in that Doncaster event, he will likely need to pull out a bit more in what is the hottest juvenile contest of the season. But on what we have seen to date, there is every reason to believe he may be up to the task.

Marcus Tregoning took this prize back in 2005 with his subsequent Epsom Derby hero, Sir Percy, and will have high hopes of claiming the pot for a second time with the Sheikh Hamdan Al Maktoum-owned runner, Alkumait.

This one looked a winner in waiting when enjoying no sort of run in a novice contest on debut at Newbury, and has since gone on to back up that assessment with two highly impressive successes in his two most recent starts. Way too good for his rivals in a maiden event at Goodwood, he then had significantly more on his plate when stepped into the Group 2 Mill Reef Stakes back at Newbury last time out. And whilst he didn’t get the job done quite so easily that day, he was still hardly going full throttle in registering success by a margin of almost a length from a quality field. The manner in which he loomed up on the outside, quickened clear and pricked his ears once in front hinted at a very smart performer in the making, and he looks well worth this seat at the top table.

The main question mark comes with this step up from six furlongs to seven furlongs, particularly with the ground looking like making this a thorough test at the trip. By speed influence, Showcasing, and out of a Dutch Art mare, he does have questions to answer on the pedigree front, but was so impressive in that latest win that we are loathe to rule him out.

Aidan O’Brien regularly sends a colt from at least towards the top of his juvenile pecking order for this race. Champion juvenile, Air Force Blue, and subsequent 2,000 Guineas king, Churchill, have featured amongst his four winners of the race in the past 10 years. O’Brien saddles two this year in the shape of St Mark’s Basilica and Wembley. Of that duo it is the latter who we fancy boasts the stronger claims.

Something of a slow burner, this son of Galileo didn’t break his duck until the fourth time of asking, but it isn’t unusual for one from this yard to take a while to come to hand. The fact that his Roscommon victory came on soft/heavy ground augurs well for his chance, but it is his effort in defeat last time out at the Curragh which makes him of strong interest here. Travelling all over the back of a packed field in that Group 1 National Stakes contest, he was forced to check and switch wide before finishing with a real flourish to reel in all bar Thunder Moon at the line.

We fancy he may well have won that race with a clearer passage. Whilst the manner in which he hit the line strongly is a big positive in a contest where a premium is likely to be placed upon stamina. Being a full brother to Johannes Vermeer, this one also gets a big tick in the pedigree box. The biggest success of Johannes Vermeer’s career came when winning the 2015 Group 1 Criterium International over this trip of seven furlongs during his juvenile campaign – with the race being run on very soft ground that year. 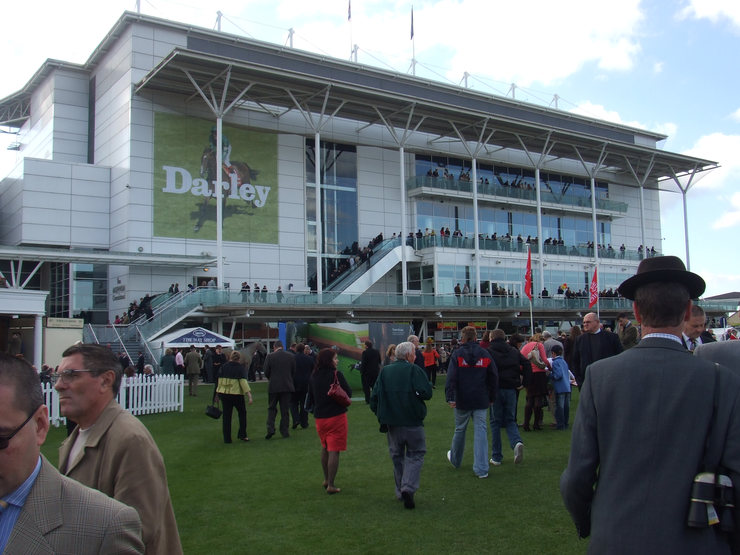 Budding two-year-olds have the chance to end their first season racing on a huge high note thanks to the £400,000 (2020) Dewhurst Stakes. Run every October, the seven-furlong test is the most prestigious contest in Britain for juvenile horses. Both colts and fillies can compete, with the latter handed a 3lb allowance but there is no space for geldings. Often attracting the best young horses around, many Dewhurst winners are names you’ll end up seeing again and again in following seasons so this is definitely a race to watch.

Originally founded all the way back in 1875, this race has a long history of producing some really fine winners. The Hungarian-bred Kisber claimed glory in the inaugural contest before winning the Derby at Epsom a year later. The following three Dewhurst champions also went on to win at least one Classic as three-year-olds. It seems only appropriate then that today the Group 1 race is the feature event of Newmarket’s Champions’ Day meeting.

NO GUARANTEE OF FUTURE SUCCESS

You’d think that winning such an elite two-year-old contest would act as a definite platform for more glory the following season but this is not always the case. For each Frankel or Dawn Approach, there are another two horses whose Dewhurst win ends up being the peak of their careers. 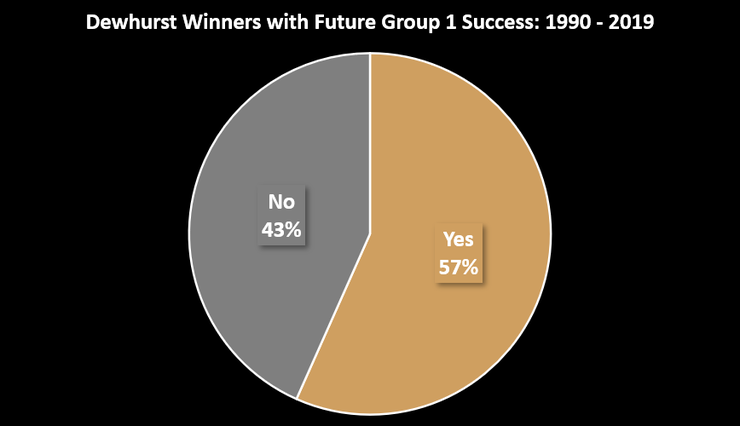 It really is very much a guessing game when trying to predict which horses will make the cut as a three-year-old as there appears to be very little in the way of middle ground. Looking at data since 2003, only one Dewhurst-winning horse that managed a three-year-old win at all, did so at lower than Group 1 standard.

This contest is seen as a sort of birthplace for future Classic champions and there is certainly a degree of truth in this. Churchill (2016), Dawn Approach (2012), Frankel (2010), New Approach (2007) and Sir Percy (2005) won either the 2,000 Guineas or the Epsom Derby the following season. So, while future success is far from a guarantee, Dewhurst winners are definitely worth keeping your eye on when returning from the winter break. 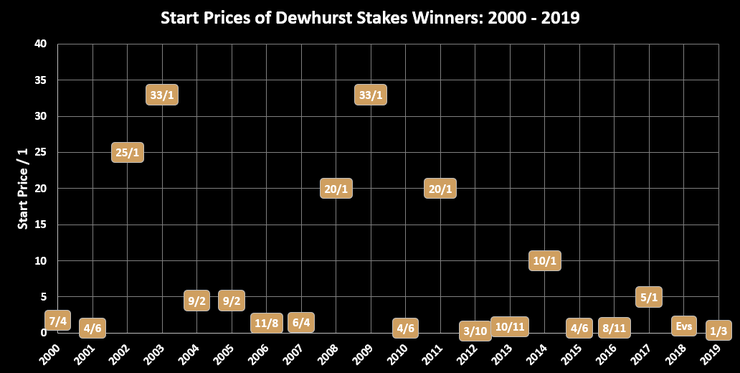 Favourites have won their fair share in the meantime but they only just trade at a level stakes profit of £0.89 between 2000 and 2019 with the average price of the winning favourites in that time around 10/11.

FROM DESTRUCTION TO DEAD HEAT

The Second World War only forced one cancellation of the Dewhurst Stakes but nearly 50 years later, the British weather was enough to see the race abandoned. In all fairness to the organisers, they had no other choice as powerful winds tore through the nation. So strong were the gales that all temporary structures at Newmarket were completely flattened. Even some of the fences separating horses with spectators had taken a battering so there was no possibility of a quick fix.

Back as usual the following the year, the Dewhurst renewal was one to remember. There was no winner in 1987 due to the cancellation but in 1988 we had two courtesy of a dead heat. It was only the first time since 1910 that two horses couldn’t be separated as they crossed the finish line. Any other result would’ve been a little unfair given how tirelessly Prince of Dance and Scenic battled down the final two furlongs. The two horses gave it their absolute everything during what was a fair and completely unobstructed slog.

You can watch the pair battle their way to shared glory here: