The undoubted highlight on the closing Saturday at Royal Ascot is one of the very best sprint races of the year as the 6f speedballs line-up for the Diamond Jubilee Stakes.

Part of the British Champions Series, this is one of the most prestigious races of its type in the world and is regularly targeted by the crème de la crème of the British and Irish sprinters as well as those from further afield.

The final day of Royal Ascot 2020 features a bumper eight races, with some really classy contests among them. For many, the Diamond Jubilee Stakes is the pick of the bunch, this six furlong, Group 1 race always providing an engrossing contest.

This year’s renewal will pose a tactical challenge for trainers and jockeys as the ground is difficult to predict. Although it’s been rainy in the area, Ascot dries very quickly and the forecast for Saturday looks good, so judging the pace will not be easy.

Blue Point bowed out of Royal Ascot in the best possible way last year, completing a double of the big sprints for older horses by winning the Diamond Jubilee Stakes just days after victory in the King’s Stand Stakes. Whilst we don’t have King’s Stand winner Battaash going for the double, there is plenty to learn about Blue Point’s win last year.

For a start, Blue Point was the fourth winner in a row from inside the top three in the betting. That suggests that punters should focus their attention on the top of the market for 2020 and there are certainly some classy options to be found there.

Blue Point also ticked the rating box. His official mark was 120 last year and the previous 10 years have only seen two winners rated below 114 (Black Caviar had the highest rating at 132 for her memorable win in 2012).

Finally, Blue Point was at the top of the age bracket required to win this race. No horse aged older than five has won the Diamond Jubilee Stakes since Soldier’s Tale in 2007 and that trend may well continue for some time even though it’s now restricted to horses age four and older.

Royal Ascot 2020 has provided some excellent stories already but they would surely all be topped if Sceptical is able to justify his favouritism and win the Diamond Jubilee Stakes. The four-year-old was part of Godolphin’s incredibly powerful stable but didn’t make the grade and so was sold for just £2,800. It was James McAuley who stepped in to give Sceptical another chance and what a decision that has proven to be.

In just four starts, Sceptical became the top rated sprinter in Ireland. That is tremendously fast progress so it is understandable that some believed his rating was a little too high. The number of Sceptical sceptics reduced significantly after his win in the Woodlands Stakes a fortnight ago though.

It looked for all the world as though Sceptical came out of the stalls too quickly that day at Naas, such was the speed with which he was travelling. It turned out that he’s just that naturally talented as he found plenty to quicken away and win that Listed race over five and a half furlongs. How well that form holds up against Group 1 competition remains to be seen but a return to that sort of form would surely be good enough for Sceptical to win at the top level. 5/2 seems a fair price from where we’re looking.

In Sceptical’s favour is the fact that this is far from the strongest renewal of the Diamond Jubilee Stakes, at least on paper. Global travel restrictions have severely limited the number of international raiders taking part but don’t think that the favourite is without serious competitors, of which One Master may be the pick of the pack.

The obvious factor working against William Haggas’s mare is her age. She isn’t the most heavily raced six-year-old you’ll find this week at Royal Ascot though and will be nice and fresh as this is her first race of the season. Trends don’t win races but she would certainly seem up against them though.

Connections will be hoping that the ground does not dry up too much at Ascot as her chances are better if the ground stays on the soft sound of good. She showed just how strong she can be running over 6 furlongs on testing ground at Ascot last time out at the end of last season when she finished second in the British Champions Sprint Stakes. Had she not run into trouble that day she could well have gone one better and added another Group 1 to her C. Her backers, and the whole Haggas team, will be hopeful she’ll right that wrong on Saturday.

About the Diamond Jubilee Stakes

What used to be the Cork and Orrery Stakes became the far grander sounding Golden Jubilee Stakes in 2002. You’ll get no points for correctly guessing what inspired the change in title with that of course being Queen Elizabeth II’s 50th year on the throne. Ten years later and the Queen celebrated yet another anniversary, her Diamond Jubilee, with the name of this race updated accordingly. With Her Maj seemingly going stronger than ever there could be a few more name changes to come!

The elite bunch of sprinters that contest this Group 1 race make it fitting for such a royal title and it is far more appropriate than its original name. Called the All-Aged Stakes when first contested back in 1868, it would now be a misleading title with this race restricted to four-year-old’s and above since 2015. The creation of the Commonwealth Cup sparked this change although three-year-olds from the southern hemisphere are still eligible to compete.

The six furlong Diamond Jubilee Stakes is one of just three British races to feature as part of the now suspended Global Sprint Challenge. It was the middle of the three legs held in this country, coming after the King’s Stand Stakes run earlier at Royal Ascot but before Newmarket’s July Cup.

WATCH OUT FOR THE AUSSIES

With three-year-olds from the southern hemisphere still able to take part in this race, it’s something that should help maintain the steady Australian presence. Not only have horses from the other side of the planet been a somewhat regular feature in the Diamond Jubilee but they often make the most of their long journey. Several have gone on to win while others have secured a placed finish as you can see in the chart below. 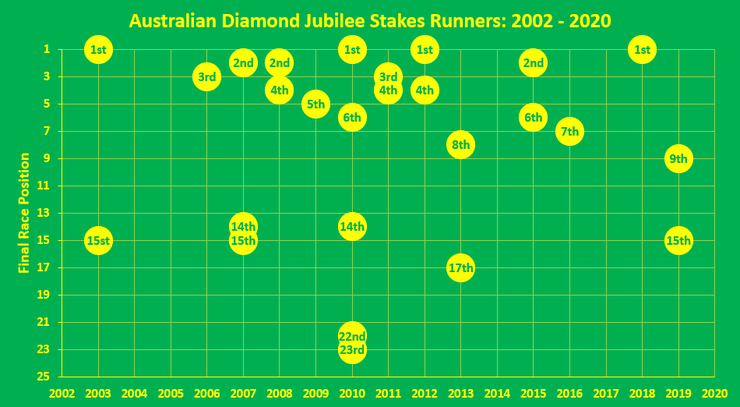 BLACK CAVIAR DELIVERS, BUT ONLY JUST 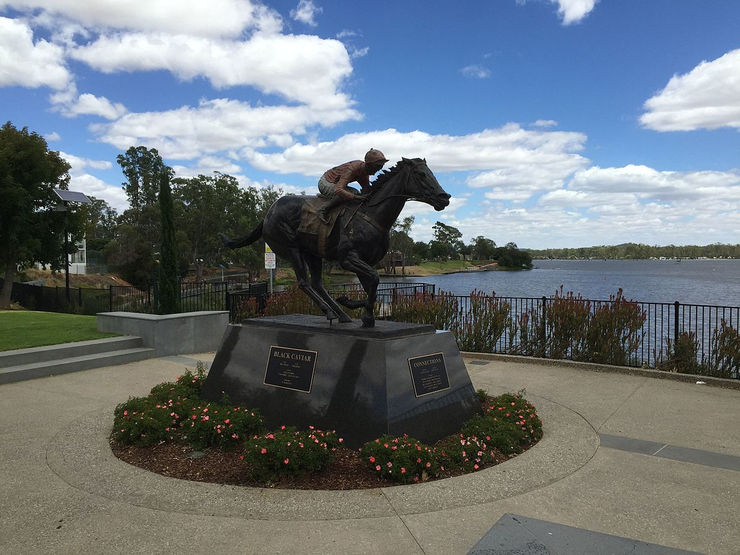 For weeks prior to the 2012 renewal of the Diamond Jubilee Stakes, Black Caviar found herself the focus of much media attention. The Australian-trained horse hadn’t lost any of her 22 starts Down Under, making quite the big name for herself in the process. Seeking to show off his horse to the world, trainer Peter Moody risked the long winning streak by giving his prized mare a test on foreign soil.

To ensure she arrived in London in good health, the then five-year-old wore a compression body suit during the journey following the recommendation of Olympic athlete Sally Pearson. There was no expense spared and the wondermare was fully expected to win with ease.

Due to her imposing record in Australia, the bookies took no chances on Black Caviar, pricing her as the 1/6 favourite to keep her unbeaten streak intact. Everything appeared to be going according to plan with 100 yards left to go as the mare enjoyed a full length’s advantage over the trailing pack. Jockey Luke Nolen inexplicably eased off though, allowing those behind to catch up. Sensing the immediate danger, he began to push again as Black Caviar held on to win by a head. The nail-biting race can be viewed here:

While Nolen received criticism for his showing, it was later revealed that Black Caviar tore two muscles during what was her sole appearance outside of Australia.

You might think that you need be back in the winning habit in order to secure gold in a high class race such as this one. This has long not been the case however with horses more often than not lacking a seasonal win before their Diamond Jubilee involvement.

Each of the last 16 champions made at least one appearance previously in the season but a mere three did enough to claim a win. Far more important than form it seems is a history of being up to Group standard. Only one horse since 2007 has managed to win this race having previously failed to claim a Group 1-3 title. 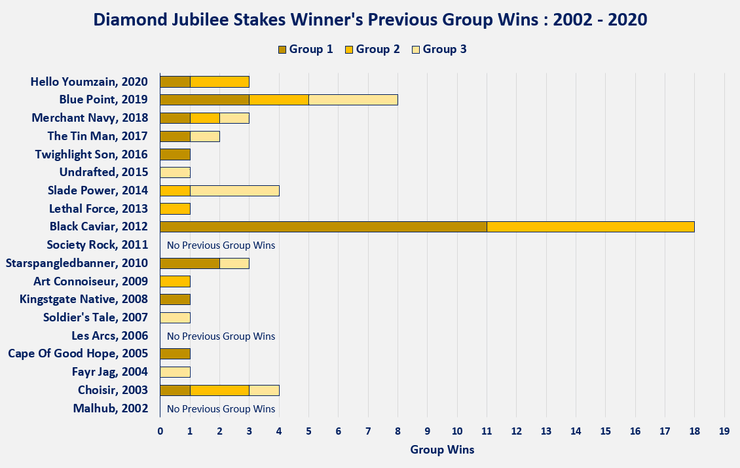