The third and penultimate day of the St Leger Festival brings one of the most prestigious contests of the meeting, the Doncaster Cup.

First run back in 1766, the Doncaster Cup actually predates the St Leger by ten years. This makes it the oldest horse race in the world that has continually run under rules.

Like the St Leger Stakes, the Doncaster Cup is for stayers, with 2 miles and 2 furlongs to be navigated, though this race is open to horses aged three and above. The race makes up the third and final leg of  flat racing’s Stayers’ Triple Crown, following the Ascot Gold Cup and the Goodwood Cup.

2m2f is the trip for this Group 2 contest which is open to all runners aged three and older, and offers £80,000 in total prize money. The ground at the track is currently described as good and the forecast suggests it is likely to stay that way or possibly firm up a little.

Sir Mark Prescott has the best record amongst the trainers on show this year having recorded two previous wins in the race, most recently with Pallasator in 2015. The Newmarket handler sends the three year old Revolver into battle this time around and will feel he has a decent chance of improving his record.

Amongst this year’s riders, both William Buick and Martin Dwyer have bagged a previous win in the race, but it is the irrepressible Frankie Dettori who leads the way with four previous victories. Dettori gets the leg up on the Ed Dunlop runner Red Verdon this year, a horse who ticks many of the key trends boxes for this race.

This has been a solid race for the market leader in recent times, with five of the past 10 editions being won by the jolly – enough to hand favourite backers a level stakes profit of +£4.99 over this period. Indeed, the favourite has landed five of the last six and eight of the last 15, finishing in the top three in 12 of those renewals.

All of the past 20 winners of the race were priced at odds of 12/1 or less and so this is certainly not one where we should expect a major upset. Perhaps the most telling trend though is that almost all of the victors in that time had won at Group 2 level or higher, despite such horses only comprising around 60% of the field. Let’s take a look at some of the key contenders in 2020.

Ed Dunlop’s Spanish Mission has been all the rage in the betting ahead of this year’s renewal, almost from the moment it became clear that none of the real established stars of the staying division – Stradivarius in particular – would be taking this race in.

Sired by Frankel’s brother, Noble Mission, it is very easy to see why the punters have latched on to this one. Only raced twice at two, he was touted as a St. Leger candidate during his Classic campaign, and whilst he ultimately didn’t line up in the final Classic of the season, he still enjoyed a most productive time of things.

Highlights included a Group 3 success in the Bahrain Trophy at Newmarket, and a big international win in the valuable Jockey Club Derby Invitational Stakes at Belmont Park. That was a fine manner in which to end his three year old season, suggesting the possibility of big things to come at four.

The strapping bay has however taken a little while to come to hand so far this season, including when no match for Stradivarius, Santiago and co in the Goodwood Cup. Those performances likely playing a role in the decision to switch the horse from the yard of David Simcock in August.

His effort last time out in the 1m6½f Chester Stakes – on his first start for Dunlop – was much more like it, as he simply looked a level above those Listed class rivals. The three-length winning margin could easily have been more that day, and he looks well worth this step back into Group company. A winner on ground ranging from good to soft, to good to firm, the likely conditions shouldn’t be an issue but, zero from two at 2m+ in his career to date, he does still need to prove that he stays this trip.

Eagles By Day finished ahead of Spanish Mission in the Goodwood Cup and can be a threat, whilst Selino looks a likely improver going up in trip. However the biggest danger to the favourite may well come in the shape of Sir Mark Prescott’s Revolver.

By crack sprinter, Slade Power, this one certainly wouldn’t leap out as high-class stayer on paper, but his shrewd trainer clearly saw something in him, and he has positively thrived since being stepped right up in trip. Zero from three over 7f in his juvenile campaign, he is now a perfect six from six at three, with those wins coming over trips ranging from 1m4f to 2m1f.

A tidy three-length success over 2m1f at Pontefract looks to have spelled the end of handicaps for now, and whilst a rating of 98 does leave him with something to find, the 12lb weight for age allowance he receives brings him right into the mix. Just the latest in a long, long line of incredible improvers from the Prescott operation, it’s never easy to tell when the rapid ascent of these runners will come to an end, and it wouldn’t be the biggest surprise were he take this further step up in class and distance in his stride.

About the Doncaster Cup: Historical, Stamina-Sapping and Exciting

The Doncaster Cup is a flat horse race which is run at the racecourse of the same name in September of each year. Originally run way back in 1766, the Doncaster cup is the venue’s oldest surviving race, and is in fact one of the longest running races in the world.

The contest was first called the Doncaster Gold Cup and run at Cantley Common and was run over a distance of four miles, before being shortened to two miles and two furlongs in 1891. In 1908 another furlong was shaved off the race, before being restored to the two mile, two furlong distance once again in 1927.

For a time the contest was graded at Group 3 level, and in 2003 it was upgraded to Group 2. Held on the third day of the St Leger Festival the race is the final part of the “Stayers’ Triple Crown”, and is preceded by the Ascot Gold Cup and the Goodwood Cup. They have this name due to being three races which are run over some of the furthest distances seen in the flat racing calendar, and as such they require the horses to have great staying power to last the long distance and claim first place.

As the race has been running for hundreds of years there are some records which have not survived, but we do have a list of the most successful jockeys, trainers and horses as accurate as the history books will tell us. Joe Mercer holds the record for the most jockey wins in the race with eight winners from 1953, which happened to be a dead heat, all the way through to his last victory in 1980.

The most successful trainers have seven wins each in this high-profile event. Cecil Boyd-Rochfort claimed his first success in 1934 and achieved the last of his seven in 1963. Then the next decade Henry Cecil began his record in 1978 and finished the run of his wins in 1997. 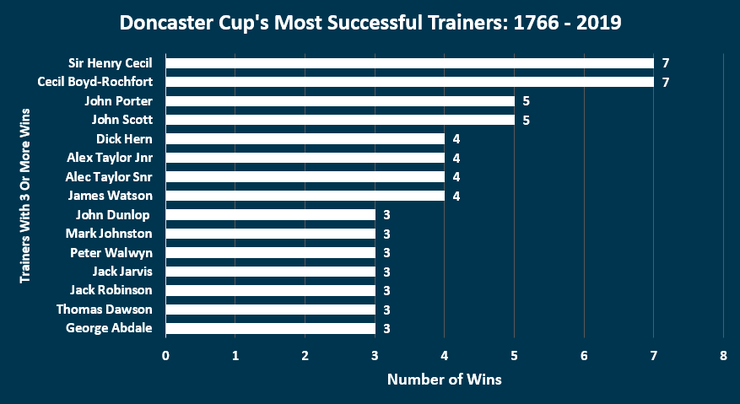 The most successful horse to ever compete in this historical affair was Beeswing who claimed first prize no less than four times for James Watson from 1837 to 1842.

As the race has so many years behind it the best thing to do when looking to make an educated selection among the field would be to look at the last two decades dating back to the year 2000. There is a common aspect where the best trainers and jockeys are always close or indeed snatch victory. From the table below you can see the most successful of those competing in the long-running race since that year.

Although having the best trainer and jockey on board gives a definite advantage, you must always consider the horses and the conditions they has faced previously. As stated earlier the race is one of the longest run on the flat, and as such the horse needs to be accomplished when running such distances. Also, taking into account the weight it is traveling with when compared to previous races is paramount. This is because the longer the race, the more the weight has a factor on a horse’s performance. When you consider those important aspects you have a good chance of choosing a horse with a fighting chance.