Budding young fillies have the chance to show what they can do on a big stage in the Duchess of Cambridge Stakes on the Friday of the July meeting. Keep your eye out for the juvenile sprinters that impress here as many have gone on to win other big races the following season.

Established just after the Second World War, this race for two year old fillies’ was known as the Cherry Hinton until a name change in 2013 to honour Catherine, the Duchess of Cambridge. This was the same year that Royal Ascot’s Windsor Forest Stakes was renamed after the Duke of Cambridge, Prince William.

This Group 2 event offers £40,700 in total prize money this year, and sees a field of juvenile fillies line up to tackle the six furlong trip. The going is currently described as good, but this looks likely to change as we have a fair amount of rain forecast in the area and plenty has already fallen.

One of the classiest events of the season for the two year old female performers, this race regularly attracts runners from the top British and Irish yards. Sir Henry Cecil and Sir Michael Stoute currently boast the all-time lead amongst trainers, but bidding to join them on four wins this year is Irish supremo Aidan O’Brien.

We may have a new leader in the jockey table this year should Frankie Dettori come home in front aboard Hala Hala Hala. Currently tied on five wins with Walter Swinburn, Dettori will move out on his own should he prevail aboard the Kevin Ryan-trained runner.

This race hasn’t been averse to a shock result, with two 20/1 winners in the space of the past seven years. The past decade has also seen four winning favourites or joint favourites – a fair strike-rate, but still handing supporters of the market leader a small level stakes loss of £1.00.

Clear favourite for this year’s renewal is the Karl Burke-trained, Dandalla, and it’s tough to argue with that assessment. Reportedly showing all of the right signs at home from a very early stage, this daughter of the speedy Dandy Man duly delivered on the track at the first time of asking when landing her Maiden at Newcastle. Two lengths too good for the field that day, she was fairly impressive, but no more than that, and headed to the Group 3 Albany Stakes at Royal Ascot as just one of many runners seemingly in with a chance.

What followed at the Berkshire venue was one of the most visually impressive displays of the entire meeting, as the mount of Ben Curtis comprehensively slammed her rivals – including runners from the powerful Aidan O’Brien, John Gosden and William Haggas yards. Powering right away from the field when push came to shove in the final furlong, Dandalla was fully six lengths too good for the field at the line, looking every inch a filly going places. Group 1 targets were understandably mentioned in the aftermath of that event, and connections will be hoping she can continue along that path by landing this Group 2 affair.

Next in the list comes the Ralph Beckett runner, Time Scale. Going in the colours of Qatar Racing Limited, this daughter of Charm Spirit didn’t look an obvious contender for Group race honours when getting just about everything wrong to finish sixth on debut. However, she hasn’t been long in making amends and heads into what is the biggest test of her career in search of a quick fire hat-trick.

Routing the opposition by a very easy six lengths on her second start at Chepstow, she really impressed with both her professional attitude and speed that day, and already looked ready to be stepped right up in class. Set a far tougher assignment next time out in the Listed Empress Stakes on the Rowley Mile course at this venue, she was at least as impressive in outpacing her rivals close home to score by three and three quarter lengths. One of the most notable aspects of that effort was the fact that she won so well despite not seeming to be entirely comfortable on the good to firm surface. With slightly easier conditions anticipated here, she looks a big threat to all.

From just four runners in the past 10 editions of this, Aidan O’Brien has struck gold twice, with Roly Poly and Clemmie landing back-to-back renewals in 2016 and 2017. That relatively small number of runners and high strike-rate would suggest that O’Brien is pretty selective with the youngsters he sends in pursuit of this prize, making his sole entry, More Beautiful, well worth a second look.

Being sired by War Front and out of a Group 1-winning Galileo mare in the shape of Maybe, More Beautiful is very closely related to 2016 champ Roly Poly, and connections will certainly be hoping she can follow a similar career trajectory to that three-time Group 1 winner. It all started well enough on debut at Naas as, with Seamie Heffernan doing the steering, she proved much too quick for the field to score in eye-catching style. She does however now arrive here on something of a recovery mission having badly disappointed in the Queen Mary Stakes last time out. Sent off the even money favourite that day, the writing was on the wall a long way from home as she laboured to a ninth placed finish. Clearly better will be required here, but she remains a filly of significant potential and is in the right hands to bounce back.

About the Duchess of Cambridge Stakes: Potential 1,000 Guineas Contenders

One of the real joys of the flat racing season is getting to see younger horses, full of potential, make their way in the sport. Breeding and the purchase fees commanded always tell a story but there is no substitute for seeing how well a horse copes (or otherwise) with the demands of competitive racing.

The Duchess of Cambridge Stakes is a very important race in the early stages of the careers’ of highly regarded fillies. This Group 2 contest takes place over six furlongs and usually attracts a strong field, many of whom have already competed with distinction at Royal Ascot. The record of winners in recent years is mixed to say the least but this remains an important race which punters should keep a close eye on, especially in relation to the following season’s 1,000 Guineas.

The Duchess of Cambridge Stakes was first run back in 1947. Originally known as the Cherry Hinton Stakes, it didn’t take long for it to build up some real prestige. That was helped when links between the Newmarket contest and the 1,000 Guineas, which is also run at Newmarket, began to emerge. In 1961, Sweet Solera became the first horse to win the first fillies’ Classic of the year having won the Cherry Hinton as a two year old.

The quality of the race meant that it was held at the Group 3 level with the advent of the new grading system in 1971 before being promoted to a Group 2 in 1996. The race then took another, if very different, boost to its reputation when it was renamed in honour of Catherine, Duchess of Cambridge in 2013.

Proven Class Important Even for These Juveniles

Every horse who runs in the Duchess of Cambridge Stakes has a lot to prove. That is par for the course for juveniles at this stage of their racing career but the vast majority of recent winners did at least have one good run under their belt. 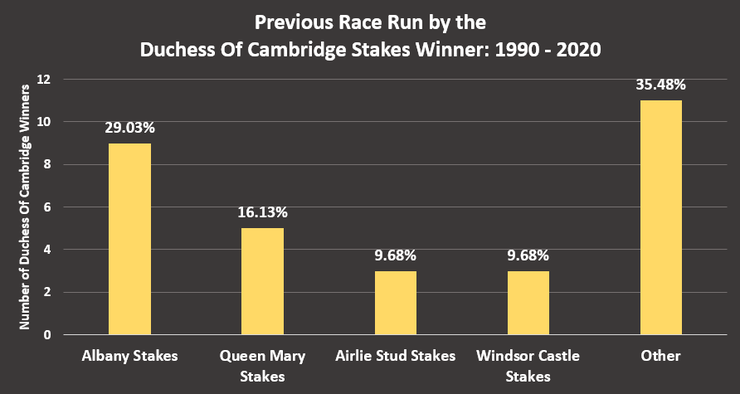 The key races to pay attention to in that regard are the Queen Mary Stakes or the Albany Stakes at Royal Ascot. Those are both races which are often won by horses who only have one run under their belt but by the time the Duchess of Cambridge Stakes rolls around you would want to be backing horses who have already made an impact against quality opposition.

As we have seen, the Duchess of Cambridge Stakes is not usually a race for previously unheralded horses to make their breakthrough. The high calibre nature of the field means that savvy punters always add this to their list of races to watch in their hunt for contenders for future big races.

The ultimate goal for connections of Duchess of Cambridge winners is that their horse goes on to win the 1,000 Guineas. That, however, is a very difficult feat to achieve. Indeed, it is getting tougher for horses to complete that particular double with 2004 Guineas winner, Attraction, the last horse to pull it off. Indeed, many recent graduates of this race have struggled to have much more success at all at the highest level as they mature.

There is always the chance that a filly can mark herself out as something special at Newmarket in July though. The longevity of their career is one thing, winning again in the season is quite another. However, punters should seriously consider any winner who goes on to compete in the Cheveley Park Stakes at Newmarket.