York Racecourse opens its doors on a Wednesday in mid-May to get their three day Dante Festival underway, one of the top meetings of the flat racing season. Helping to get the festival off to a strong start is the highly anticipated Duke of York Stakes.

York first held a race by this name in 1895 but that event bears little resemblance to the one we see today with the Duke of York Stakes now a race for sprinters.

This six furlong sprint begins at the end of a spur to the south of the course which joins the main course in a straight dash for the winning line.

Duke Of York Stakes Past Winners

About the Duke of York Stakes

The Duke of York Stakes is a six furlong flat race which is run on the first day of the three day Dante Festival meeting in York, a day before the Dante Stakes. The sprint race is open to horses aged three years and older. An early version of the race was originally run as early as 1895 and was named after the then quite young, Prince George, Duke of York, who would go on to be King George V. This early contest was a middle distance affair for three year olds.

Many years later in 1950 a six furlong handicap sprint was established and was called the Duke of York Handicap Stakes and was held each year into the 1960’s. It wasn’t until 1968 that the race as it is currently known was first conceived and was won by Hard Water. In 1971 the race was brought up to Group 3 status, and again raised to Group 2 in 2003.

When having a look at the list of winners for this event it becomes apparent that the stand out trainer in terms of success is Barry Hills with an astonishing seven wins to his name, spanning almost four decades. Hills achieved success for the first time in this contest in 1974 with Noble Mark, and his last winner came in 2010 when Prime Defender took the honours that year. 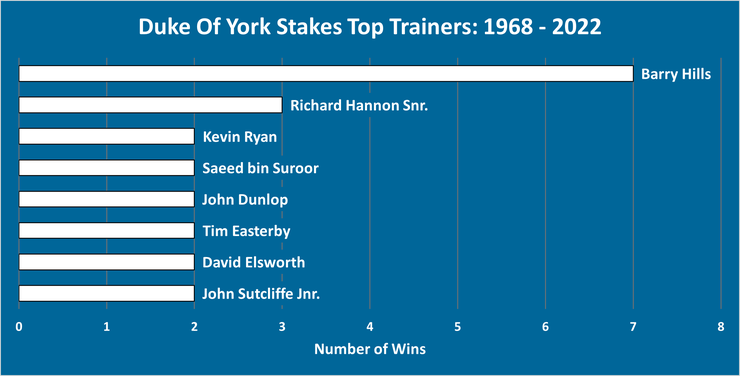 There are three jockeys who are each on four wins: Lester Piggott, Steve Cauthen and none other than Michael Hills, the son of trainer Barry Hills. There has only ever been one horse who has been successful in the Duke of York Stakes more than once. That horse was Handsome Sailor who managed to claim first place both in 1987 and 1988.

In recent years there has been a mixed bag of jockeys who have gained first place in the contest. Frankie Dettori is the only one that comes close to the record having achieved success three times, the most recent having come in 2016. The champion jockey still has regular high profile winners so will always be in the mix. Regarding trainers, between 2008 and 2022 no trainer has won the event more than once, so following recent form is always the best way to gauge a trainer’s prospects in the Duke of York Stakes.

When looking at the winners from 2000 to 2022 we can see a trend regarding the ages of the horses. As you can see from the chart below, over 77% of the horses who have been successful in the race have been aged either four or five years old. In fact there has not been a three year old winner since 1999. As such it could be a good idea to keep this information to mind when making your selections. 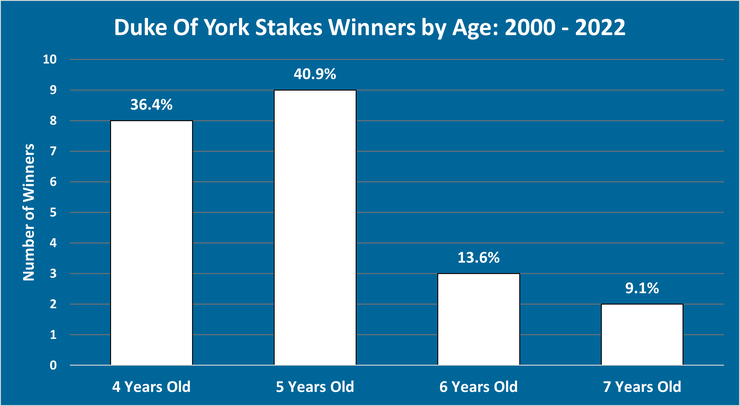