At 4 miles 1½ furlongs, Newcastle’s Eider Chase is one of the longest National Hunt races on the calendar. As a result of its marathon distance, this race is a major indicator for both the Grand National held at Aintree and Scottish Grand National from Ayr in April and also the Midlands Grand National at Uttoxeter in March. Comply Or Die, trained by David Pipe and ridden by Timmy Murphy, was the last horse to take this race before victory that year in the big one at Aintree, doing so in 2008.

First run in 1952, one of this race’s major challenges has been defeating the weather over the years, with snow, frost and waterlogging persistently causing problems for the North-East track in February.

About the Eider Chase: A Slog On The Tyne 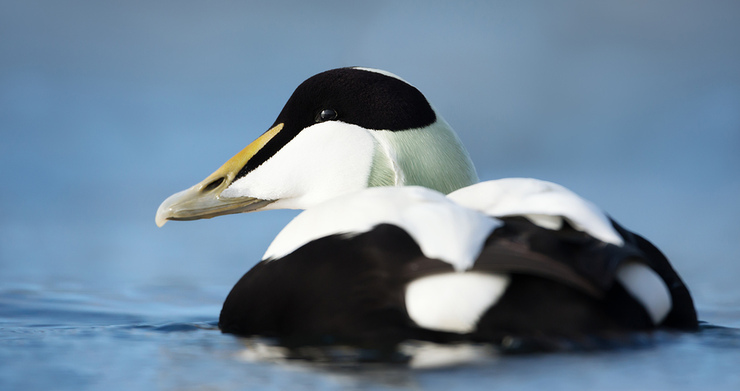 February each year sees the North-East venue of Newcastle play host to one of its biggest jumps races of the calendar year. Held over a distance of four miles and half a furlong and often run in pretty bottomless ground, the Eider Chase is undoubtedly one of the toughest and most stamina-sapping contests run anywhere in Britain or Ireland. This Class 2 handicap event is open to chasers aged five and older, with 26 fences standing between the competitors and glory.

The name of the race stems from a wildlife theme used in the naming of a number of the early races at Newcastle, with the “Eider” being a breed of duck known to live in the Gosforth Park area where the track is located. The colour of the Eider Duck? Black and white of course like Newcastle’s famous football team.

Unsurprisingly given the demands of the contest, this race has often been used as a trial for the Grand National at Aintree over the years. First run in 1952 the race was even known as the “Northern National” during its early years. Since then a variety of sponsors – most notably the Tote – have lent their support to one of the North East’s major racing events, with betting firm Betfred taking over the reins in 2012 following their acquisition of the pool betting operator. That lasted until 2018 with Vertem, a stockbrokers based in Newcastle, backing the Eider Chase since 2019.

It has proven a tall order to win both this race and the Aintree Spectacular over the years, but not an impossible one, with Comply Or Die achieving the famous double in 2008 for David Pipe. The race can be a useful pointer towards other major staying chases on the racing calendar, with Willsford backing up a win here with a triumph in the Scottish Grand National at Ayr in the same season. Merigo also went on to win the Scottish Grand National the season following his Eider win.

Tough for The Young to Prevail

It may be open to runners aged five and older, but its proven tough for any so young to outstay their older, stronger rivals. No horse younger than seven years of age has ever come home in front in this. The table below gives a full breakdown of the age of the winners. 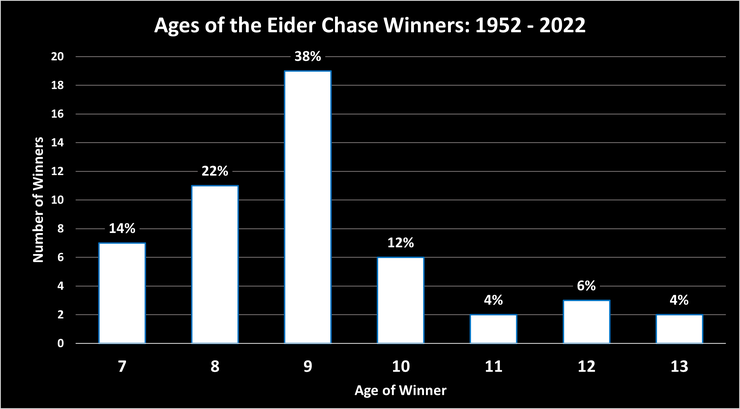 Wedding and Wyndburgh The Only Multiple Winners

A tough contest to win once, this race has proven to be an even harder race to win for a second time, with many former champions trying and failing over the years. Many, but not all. Wyndburgh landed back to back editions in 1957 and 1958, whilst Toby Balding’s Highland Wedding did even better than that when toughing it out in 1966, 1967 and 1969. That 1967 success was particularly notable because, as of 2018, the 12 stone he was saddled with that day remains the highest weight ever carried to victory in the race.

One of the unfortunate risks of staging a major horse race in Newcastle in the month of February is the fact that the weather often isn’t in the mood to co-operate. Be it due to waterlogging, snow or frost, the Eider Chase must be one of the most abandoned contests of the racing season, with no fewer than 21 editions biting the dust due to inclement conditions since 1952. The latest casualty was in 2020 when parts of the course were left waterlogged after heavy rain.