The stage is set for the third British Classic race of the season as some top class three-year-old fillies are pitted together in the Epsom Oaks. The contest also stands as the middle leg of the Fillies’ Triple Crown, although it’s a hat-trick of races rarely attempted these days.

The history of this superb event dates all the way back to 1779 and it didn’t take too long before it was recognised as one of the leading races for three-year-olds.

The Oaks is over a trip of one and a half miles, the same distance as the Derby and Coronation Cup. This start point is at the part of the course furthest from the winning post on the far side of the track from the main grandstands. After an initial right-hand turn the runners will move left handed around a sweeping bend before the home straight.

About the Epsom Oaks 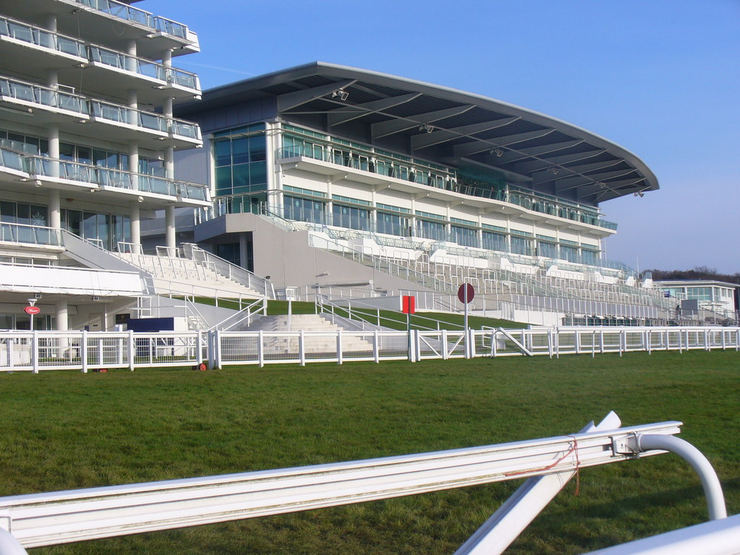 There are five Classics on the British racing calendar, two of which tend to be the preserve of the colts, two which are open only to fillies and one which regularly sees the two sexes do battle against one another. Of those fillies-only affairs, the oldest, and most prestigious, event takes place at Epsom each year in June.

Held over a trip of 1m4f, this Group 1 event restricted to the three year olds is oft imitated around the world and offers £550,000 (2022) in total prize money. At least equal to that cash prize is the value in terms of prestige and breeding value bestowed upon the winner. Here we take a closer look at one of the true jewels in British flat racing’s crown.

THE NAME IS EARL

The fact that this race has been with us since way back in 1779 is a good illustration of just how rich the heritage of the sport of horseracing is in Britain. Even that lifespan is not enough to make it the oldest of the Classics – Doncaster’s St. Leger predates it – but it does make it older than the Derby, albeit by just the one year.

The 12th Earl Of Derby, whose title is lent to what is probably still the most famous Classic in the world, did also have a role in the naming of this event; The Oaks being the name of a local estate owned by the Earl. Lord Derby certainly got off to a flier in the race he devised, landing the very first edition of The Oaks with a horse by the name of Bridget.

Many great fillies have tackled the Oaks course and distance under its current format, but none have travelled from starting stall to finish line quite so fast as Aidan O’Brien’s Love in 2020. The filly, who had already won the 1000 Guineas, tackled the step up in trip with ease, winning by a staggering 9 lengths.

Although the 2020 Oaks was run in July, both Love and Enable set their times on Good ground.

Of the Oaks records, this is the one to have been set most recently. The Oaks never fails to attract a field of the most talented middle distance three year old fillies in training, and there often isn’t too much to split the main challengers at the line. That wasn’t the case back in 1983 though when the Dick Hern-trained Sun Princess led her rivals a merry dance to scorch clear by a never equalled 12-lengths. This record stood until 2021 when Snowfall, trained by Aidan O’Brien and ridden by Frankie Dettori romped to a 16 length victory.

Sometimes the market gets it right here, but there have been occasions when it has been way off the mark. Of Aidan O’Brien’s ten successes in the race (as of 2022) , the biggest surprise of all came in 2015 when Qualify came through with a late run to swamp all her rivals at whopping odds of 50/1. That price, which was also returned by Vespa (1833) and Jet Ski Lady (1991) is the biggest ever winning SP in this illustrious event.

At the other end of the spectrum there have been plenty of bookie-bashing occasions when the most likely winner of the race has been well known to the odds compilers and betting public alike. Having landed the Triple Crown in 1904, the great Pretty Polly quite rightly now has a race named in her honour and is comfortably the shortest priced winner in the history of this race. Having already put on a show in landing the 1000 Guineas, defeat in this race was thought to be out of the question and she duly delivered at odds of just 8/100!

The premier fillies’ Classic has been kind to a number of trainers over the years, with the above chart representing just a selection of handlers who have returned to claim the prize time and again. Leading the charge is a man known simply as the “Emperor of Trainers”. Saddling up his runners way back in the early 1800s, Robert Robson racked up a phenomenal record in this race, registering 13 wins in all, beginning with the win of Scotia in 1802 and culminating with the triumph of Wings in 1825. A formidable tally, and one which no one has as yet come close to matching. 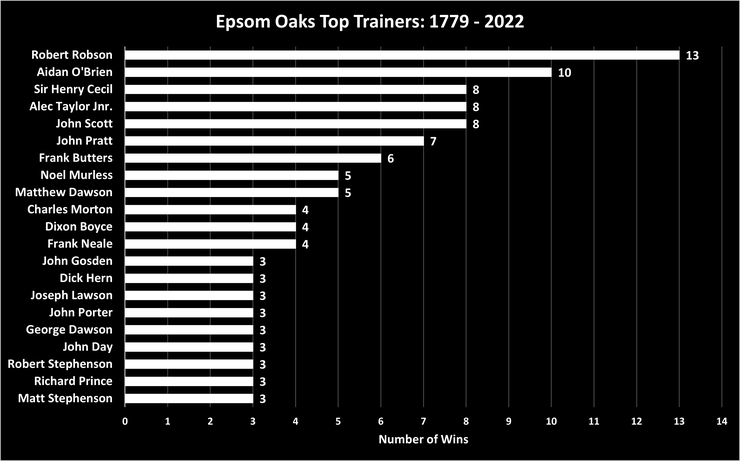 Sir Henry Cecil is a man who will likely be most remembered as the trainer of the greatest racehorse of all time, Frankel, but during his career he was also equally noted for his prowess with fillies. It is therefore no surprise to see his name towards the top of the trainers list here. The race was even titled the Sir Henry Cecil Oaks in 2014 in honour of the legendary handler who passed away in 2013.

If there is one current trainer who could potentially challenge Robson’s record then that man is undoubtedly Aidan O’Brien. The master of Ballydoyle is still relatively young and going strong and, likely to have a string of the most beautifully bred fillies at his disposal year after year, it would be a major surprise were he not to add to his current tally of ten before he calls time on his illustrious training career.

BUCKLE THE BEST IN THE SADDLE

Much like the outstanding record for the top trainer in this race, we have to turn back through a fair few pages in the history book to find the all-time leader in the jockey standings. The likes of Lester Piggott (six wins), Frankie Dettori (six wins), Kieren Fallon (four wins) and Willie Carson (four wins) will likely be familiar to many modern racing fans, but all are put in the shade by a rider who plied his trade around 200 years ago.

Beginning with Nike in 1797, and ending with Zinc in 1823, Frank Buckle registered a race-leading nine successes in this race, showing his prowess in the saddle for five different trainers, including Robert Robson, who he successfully teamed up with on three occasions. 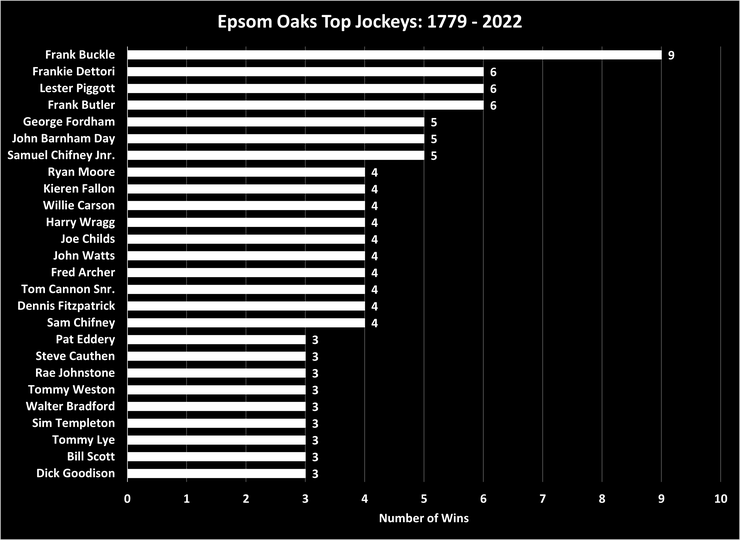