The flat racing may be back in April, but the jumps season still has one or two treats left in store for us yet. We do still have the Punchestown Festival to look forward to, but first up is Fairyhouse’s Irish Grand National meeting.

This three day festival runs from the Saturday before Easter, through to Easter Monday. The pick of the second day is this Grade 1 event, the BoyleSports Gold Cup Novice Chase, previously known as the Underwriting Exchange Gold Cup and the Ryanair Gold Cup. 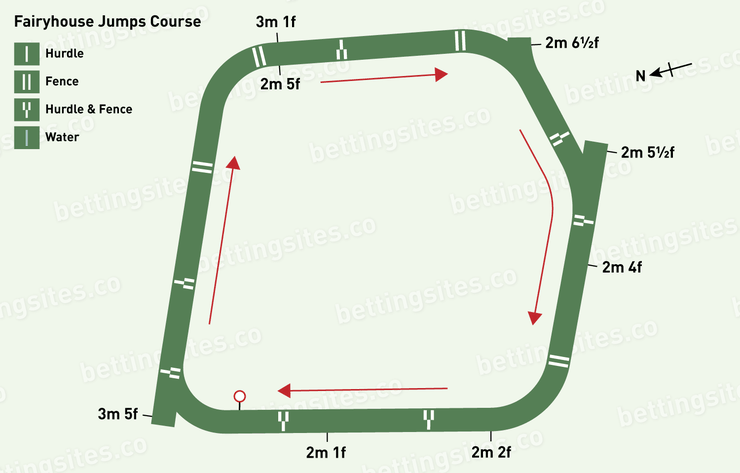 This 2m 4f novices chase to the south of the track, on the right hand side of the course from the grandstands. Runners take once fence before entering the home straight, passing the winning post and completing a full circuit. A total of 14 fences are jumped.

About the Fairyhouse Gold Cup

The Fairyhouse Gold Cup is a National Hunt steeplechase held in County Meath in Ireland. The race is for horses of five years and up, and is only for novice chasers, meaning that they cannot have won a race of the same kind prior to the start of the current season.

Don’t let that fool you though, this is a race of the highest calibre and has had many previous illustrious winners such as the brilliant Arkle and Voi Du Reve. As most high profile races often do, the Fairyhouse Gold Cup attracts the very best of trainers and horses, all vying for the purse which is always a six figure sum.

The Gold Cup (BoyleSports are the current sponsors) takes place on Easter Sunday of each year. The race is part of the Fairyhouse Easter Festival, which happens to hold the Irish Grand National that weekend also. The festival boasts much more than the world’s best within the realm horse racing. There are bands that play throughout the three-day event, and there is even an Easter Bonnet competition, among much more. For racing fans though, this is undoubtedly one of the key events of the three days.

Within the modern era there have been many notable jockeys who have won the Gold Cup, including icons such as Anthony McCoy, Ruby Walsh and Andrew Lynch, but it is the Irishman Paul Carberry who holds the record of jockey with the most wins. The local lad (Carberry was born in Ashbourne, Meath) is clear of his rivals with a resounding four wins at Fairyhouse. A truly astounding feat. In fact there are no jockeys at present that look like they could even get close to the record anytime soon, given the retirements of Walsh, McCoy and Barry Geraghty.

As for the winning trainers, it is certainly a who’s who of world class National Hunt trainers with notable names such as Noel Meade, Peter Casey and Willie Mullins all on the roll of honour. The record for top trainer had looked secure for many years, belonging to to Carberry’s fellow countryman Jim Dreaper, who has five wins from the years of 1973 to 1994. Willie Mullins won four in a row between 2018 and 2022 however, and could well draw level with Dreaper sooner rather than later.

When checking the facts with this particular race there is one massive trend that cannot be overlooked. That trend is the age of the previous winners since 1990. As shown by the chart below, the vast majority of winners have been aged between six and eight years old. This shows that perhaps the five year olds are just still a bit green, as not one five year old has won since 1972. 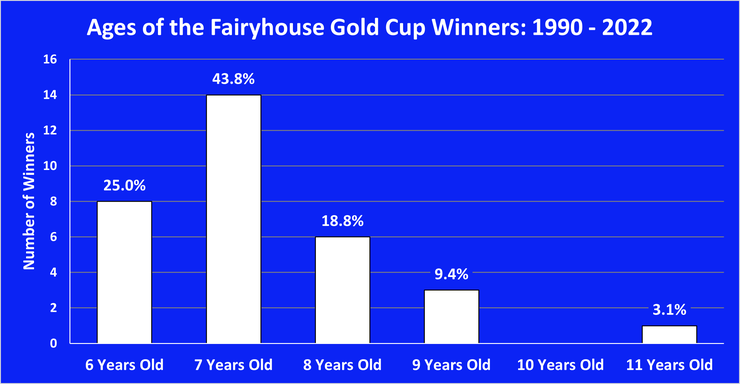 There have been three winners at the age of nine and one 11 year old winner within the selected period. This would lead us to believe that it is likely to pay to focus very much on runners at the peak of their powers – not ground breaking but worth being aware of.

This research shows that 28 out of the 32 winners within the specified timeframe, in other words 87.5%, were within the six to eight age range, and 31 out of the 32, being 97% of winners, were aged six to nine.

Whilst we don’t have stats on how many older and younger and horses have run over this period, surely any sensible punter must look to first to contenders that meet these strong age trends. And if you want to be even more specific, seven year olds could be the place to start, with horses this age delivering the goods almost 44% of the time since 1990.