The flat racing season is drawing to a close in October when Newmarket host their Future Champions Festival. The two day meeting runs from Friday to Saturday, with this race, the Fillies’ Mile, the highlight on the first day.

This highly regarded test is for two year old horses and for many taking part it will be the end of their debut season. Often attracting some of the most promising young fillies in the country, many winners go on to produce even greater things after the winter break.

Former champions include the likes of Minding, Rhododendron and Laurens but who will be the next to catapult themselves to the top of the market for next year’s 1000 Guineas and Epsom Oaks?

As the title would suggest this Group 1 event for the two year old fillies is held over a 1m trip. The contest offers excellent prize money of £400,000, with the ground at the track currently described as soft. With rain forecast on Thursday and race day, things could get quite testing, and that is certainly something to consider.

With five previous wins in this race, Aidan O’Brien is the most successful of the trainers on show this year. In fact, the Ballydoyle maestro needs just one more win to move into a tie for the all-time lead with training legend Henry Cecil. Aidan relies on Snowfall and Mother Earth this time around, both of whom are amongst the outsiders in the betting and so the Irish ace may have to wait another year for his sixth victory.

Super sire Galileo has been doing rather well in this race in recent years, with five of the past six winners either being sired by Galileo himself, or by one of his sons. Zabeel Queen, Dubai Fountain and Shale are the three fillies to fit that trend this year this time around.

This has been a solid race for the market leaders of late, with six of the past 10 editions having been claimed by either the favourite or joint favourite – enough to hand jolly backers a level stakes profit of +£3.72. Chriselliam won at big odds of 28/1 in 2013 and we have had double-digit winners in 2017 and 2018 as well, but overall this is most certainly a race where the market tends to have a decent handle on things.

A top three finish last time out is valuable here, with all of the past 20 winners ticking that box despite only making up 80% of the field in that period. Limiting your options to a horse priced no greater than 14/1 also seems wise, with Chriselliam the only real outsider to deliver the goods in the past two decades. The aforementioned Zabeel Queen and Dubai Fountain meet these trend criteria, and also tick a number of other historical boxes, but we think there may be better options.

This is certainly a strong contest for the O’Brien clan. As mentioned, multiple winner of the race, Aidan holds two entries, but also represented, with one runner apiece, are his two sons, Donnacha and Joseph. Of the quartet of O’Brien-trained runners, it is Donnacha’s Shale who is currently the shortest price in the market and vying for favouritism in most lists.

The youngest of the trio, fledgling handler Donnacha has already registered Group 1 triumphs courtesy of this filly and Fancy Blue, and will be hopeful of adding to his tally still further with this daughter of Galileo. Out of a dam in Homecoming Queen who landed the 2012 1,000 Guineas at this track by a resounding nine lengths, like so many of the Ballydoyle runners, this one is bred in the purple.

It is what she has shown at the track which was resulted in her working her way to the head of the market though. A winner of three of her five starts to date, she arrives on the back of a career best effort in the Group 1 Moyglare Stud Stakes at the Curragh, when showing an admirable attitude to tough it out close home. Already a winner at the distance, in this grade, and on soft ground, there is plenty to like about her chances.

Another filly to make masses of appeal on paper is the John Gosden representative, Indigo Girl. Sire Dubawi is regularly the only stallion to get anywhere near Galileo in the Champion Sire tables, whilst her dam, Montare, won four times in Group company, including the Group 1 Prix Royal-Oak at Longchamp.

The Dubawi/Montare combination has already proven to be a fruitful one, having given us the 120 rated Journey who won the 2016 Champion Fillies & Mares Stakes at Ascot for Gosden. It’s too early to say whether Indigo Girl will go on to achieve anything like that level of success, but the early signs have certainly been encouraging.

Three lengths too good for the field when making her debut in a novice event at Yarmouth at the back end of August, she was then stepped right up in class for the Group 2 May Hill Stakes at Doncaster last time out. Looking very green in the closing stages that day, she still really impressed with her change of gear to take the lead, before idling again on the run in.

Three quarters of a length clear of her rivals at the line, she looked to have a fair bit left in the tank to our eyes and looks well worth this further step up the ladder. Already proven on soft ground, and likely to put in a more professional performance now having her third career outing, she really could be anything at this stage and rates a major threat to all.

Going for Joseph O’Brien is the imposing filly, Pretty Gorgeous. A strapping sort, this good looking bay certainly lives up to her name visually, and has also shown plenty at the track in never finishing outside of the first two in her four starts to date.

Being sired by Lawman, and out of an above average but unexceptional sprinter in Lady Gorgeous, this one wouldn’t be as spectacularly bred as others in the field, but so far does look to be adding up to something greater than the sum of her parts. Her form also ties in very closely with that of Shale, with the filly having clashed with the Donnacha O’Brien runner in three of her four career starts to date.

Two of those three battles have resulted in defeat for Pretty Gorgeous – going down by 1½l at Leopardstown, and ¾l in that Moyglare Stud Stakes at the Curragh last time out. Each of those races did come on good ground though, and in their only previous meeting on soft, it was Pretty Gorgeous who emerged victorious when forging 2½l clear in the Group 2 Debutante Stakes. With conditions riding as they are, connections will no doubt be optimistic of a similar result this time around and she may offer decent value at the current prices.

About the Fillies’ Mile: Females Take Centre Stage At Newmarket

The Fillies’ Mile has always been one of the most important one mile contests for juvenile fillies in the flat racing season. It is a contest which has been through a number of changes over the years to ensure that remains the case, and it looks to be stronger than ever now it has been cast in the role of the feature race on the first day of the Future Champions Festival at Newmarket.

Changes For the Better

When the Fillies’ Mile was introduced in 1973 it took place at Ascot. Apart from one year when renovation work forced it to Newmarket, the Fillies’ Mile remained at Ascot from the inaugural race all the way through to the 2010 edition.

During its time at Ascot, the race went by many different names. It was first run as the Green Shield Stakes and then the Argos Star Fillies’ Mile after that company changed its name. The name subsequently changed a few more times with sponsorship taken over by Hoover, Brent Walker, Meon Valley Stud and Shadwell before Dubai were introduced as the primary sponsor following its move to the Future Champions Festival.

The introduction of the two day Future Champions Festival in 2015 has been a real boon to the Fillies’ Mile. It required another move in the schedule after hosting was transferred from Ascot to Newmarket but that has been more than worth it with an increase in the prize fund to over £550,000 (2019) and a steady stream of some of the best two year old fillies in racing.

Top class fillies have always headed first to Ascot and then Newmarket for the Fillies’ Mile. The list of winners includes many who were the superstar fillies of their generation such as Oh So Sharp who completed the Fillies’ Triple Crown in 1985. In more recent years Minding has won the Fillies’ Mile before winning the 1,000 Guineas whilst 2019 Guineas winner, Hermosa, finished second in the Fillies’ Mile.

There are several potential routes to the first Fillies’ Classic of the season so an appearance in the Fillies’ Mile is by no means necessary. Several winners of the race did go on to have plenty of success in other big races and, as the table below shows, that’s been more common in recent years. 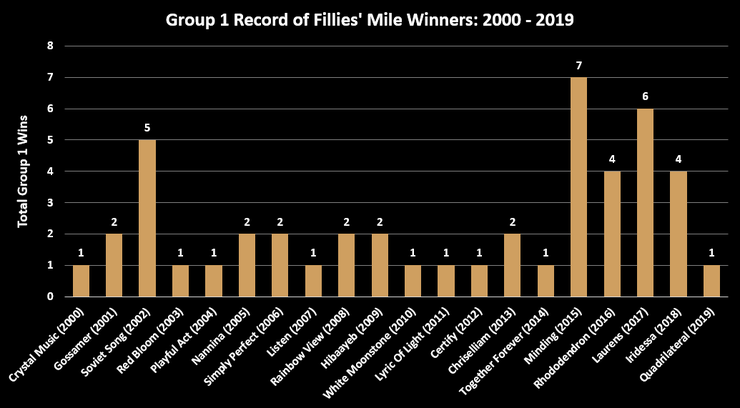 Things to Consider When Picking a Winner

The Fillies’ Mile is the sort of race to which punters know to pay close attention as they make their shortlists for the big races the following year. It is also usually an exciting betting heat in its own right. Recent years have provided an enticing combination of winning favourites and longer odds outsiders.

Backing the favourite always comes with a certain amount of risk in a high quality juvenile race. Favourites who get the job done tend to have shown glimpses of real class on the flat at any distance whereas successful outsiders tend to have a better record over a mile. In terms of specific warm-up races, British runners often take in the May Hill Stakes at Doncaster with Irish horses often running well in the Moyglare Stud Stakes at the Curragh.