The Finale Juvenile Hurdle is one of the key supporting races sharing the card with the Welsh Grand National from Chepstow. This is the only Grade 1 National Hunt race run for three year olds before becoming classed as four years old at the turn of the year.

Juvenile hurdlers competing here will be aiming to take form from this contest to take to the Triumph Hurdle at the Cheltenham Festival and the Anniversary 4-Y-O Hurdle during the Grand National meeting at Aintree in April.

The next race is scheduled to run on 27th December 2020. The race info, trends and tips shown below will be updated for the next renewal once the final declarations have been made.

Two miles is the trip for this Grade 1 hurdle, set to be run on soft ground this year and offering £65,000 in total prize money.

The bookies have seldom been too far off the mark in this race with only one winner this decade not from the top three in the betting. The only exception to the rule, Le Rocher (2013) set off at odds of 11/2 so if it’s an upset you seek you are best looking elsewhere. Quite the opposite of a shock result, we are putting our weight behind the shortest-priced option who has made a superb start to life over hurdles. Rather unimpressive as a flat runner, Allmankind has seemed a true natural on the National Hunt scene, winning by 37 lengths on his debut before following it up with victory at Cheltenham.

It’s this Cheltenham win which sees Dan Skelton’s horse command real respect here. Leading from start to finish, the three year old had far too much for the Grade 2 field and never looked like being reeled in. Worryingly for his upcoming rivals, Allmankind won so convincingly on soft going despite losing a shoe at some point during the contest. Suffering absolutely no issues from that dislodging, we are excited to see what this juvenile can produce this Friday.

An Irish presence in this race has been a real rarity this decade with one horse making the journey across from Ireland to Wales. Joseph O’Brien is the man bucking the trend and there’s a decent chance his sole entry thrives on the trip to unfamiliar territory. Much like Allmankind, Cerberus has two hurdles victories to his name including a graded triumph last time out. Facing some fairly stiff opponents at Fairyhouse, the three year old made all and extended his advantage following the final leap.

Although the Grade 3 win came only on good to soft ground, Cerberus has won in far muddier conditions, finishing 19 lengths clear on heavy going last month. The competition may have been weak but Cerberus deserves credit for his showing, clocking a fast time given the gruelling conditions. It is easy to see why he has been tipped by many coming into this race but from what we have seen so far, Allmankind looks to be operating at a slightly higher level.

A series of handicap flat wins earlier in the year encouraged Jedd O'Keeffe to snap up Tavus from Roger Charlton. Seeing his potential as a hurdler, O’Keeffe gave the three year old his discipline debut late last month. Unfazed by having to do some leaping for a change, the bay gelding fought hard to win a Class 2 at Newcastle in some very difficult circumstances. On the back of this showing, soft conditions at Chepstow shouldn’t pose an issue but the hurdles might. There were only eight jumps to tackle at Newcastle but on the Tavus lacked fluency at times, something he cannot afford facing two very strong competitors in this race.

The last remaining runner trading at a single-digit price is Michael Easterby’s Elysian Flame, who is on the hunt for his first hurdles win. Making his National Hunt debut a fortnight ago, the chestnut gelding managed a respectable third at Cheltenham but was never in touch of the winner who crossed the line a full nine lengths clear. A big reason for this gap was Elysian Flame’s poor jumping ability, something reported by jockey Paddy Brennan. While the Chepstow hurdles may be a little more forgiving, it is hard to see an unconvincing jumper succeeding especially on sinking ground.

The sole contender boasting a course & distance win for this two mile test is Nordano who won in quite comfortable fashion when last in Wales two months ago. Impressive in the lower classes, he has failed to make such an impression when stepping up in standard. A beaten favourite when making his Class 1 debut, he then lost out to Allmankind by 14 lengths during their recent Cheltenham meeting. He had kept in close contact with Dan Skelton’s horse for much of the race but lacked pace in the home straight, something we suspect will happen again here.

*Races run in the following January due to abandonment at Chepstow in December.

About the Finale Juvenile Hurdle: Grade 1 Action at the Welsh National Meeting

Late December each year sees what is by some margin the biggest day of the season at Chepstow racecourse, as the track plays host to the stamina-sapping Welsh Grand National. It is a hugely popular event with racegoers, and regularly one of the biggest betting heats of the festive period.

For every feature event on a card, there needs to be a few other half-decent races though; and the Monmouthshire venue doesn’t disappoint in this regard, with plenty of quality featuring on the undercard. The pick of the bunch being this Grade 1 event for the juvenile hurdlers.

First run in 1971, and open only to runners aged three years at the start of the current season, this two contest is one of only three top level juvenile hurdling events of the season – the other two being the Triumph Hurdle at the Cheltenham Festival, and Aintree’s Anniversary 4-Y-O Novices’ Hurdle.

Unsurprisingly due to the time of year at which the contest takes place, the race has fallen foul of the weather on a few occasions; it was abandoned altogether in 1978, 1994, 1995 and 1996, and delayed until January in 2010, 2012, 2015 and 2017. As all horses have their birthday on 1st January, the field had all turned four by the time those latter four editions took place, unintentionally breaking the rules of the race (though obviously none were disqualified!).

Jacob and Johnson Vie For The Lead 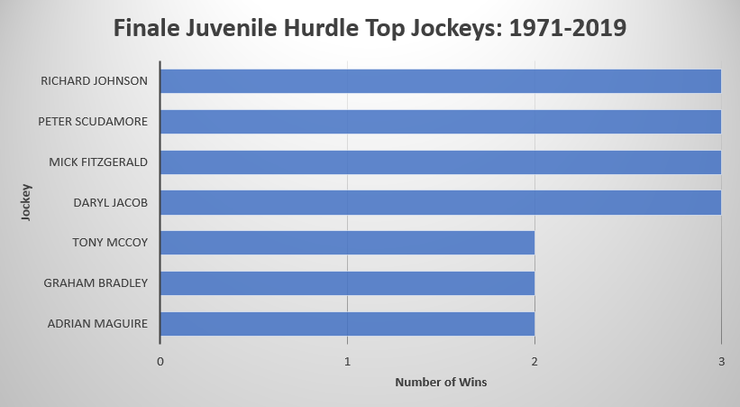 There have been seven jockeys in all to come home in front in this race on more than one occasion, including some of the biggest names in the sport from both past and present but, as of 2019, no rider has yet managed to break the three wins barrier.

Co-leaders Peter Scudamore and Mick Fitzgerald won’t be adding to their haul now, but both Champion Jockey Richard Johnson and Daryl Jacob are still active and may yet claim the outright lead.

Henderson Joins Martin At The Top 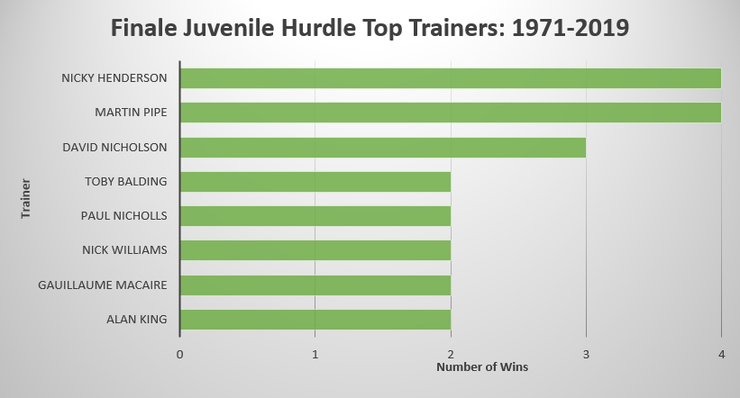 No jockey may yet have managed to claim this pot on more than three occasions, but we do have two trainers who have achieved that feat. Legendary handler Martin Pipe was the first to do so when Tony McCoy steered Rainwatch to victory in 1997.

That final success in the race for Pipe came two years before Nick Henderson’s first win in the race with Mister Banjo in 1999, but by 2017 Henderson had drawn level at the top of the trainers table, thanks to the victory of We Have A Dream. With Pipe now retired, and Henderson still going strong in 2019, will it be the Lambourn handler who is the first to five wins?

Bristol And Defi The Class Acts

This contest comes very early in a National Hunt performer’s career, and not all winners of the race have gone on to deliver on the promise of such a precocious Grade 1 success. Some do though, with two runners in particular standing out from the crowd.

Successful for Nigel Twiston-Davies in 2014, the talented grey Bristol De Mai went on to land a hat-trick of Grade 1 triumphs as a chaser, in addition to an admirable third place finish in the Cheltenham Gold Cup. The pick of the previous victors for our money though is Philip Hobbs’ 2016 champ Defi Du Seuil. The JP McManus owned star registered a further six (and counting) successes at the top level, including wins in the Triumph Hurdle and JLT Novices’ Chase at the Cheltenham Festival.